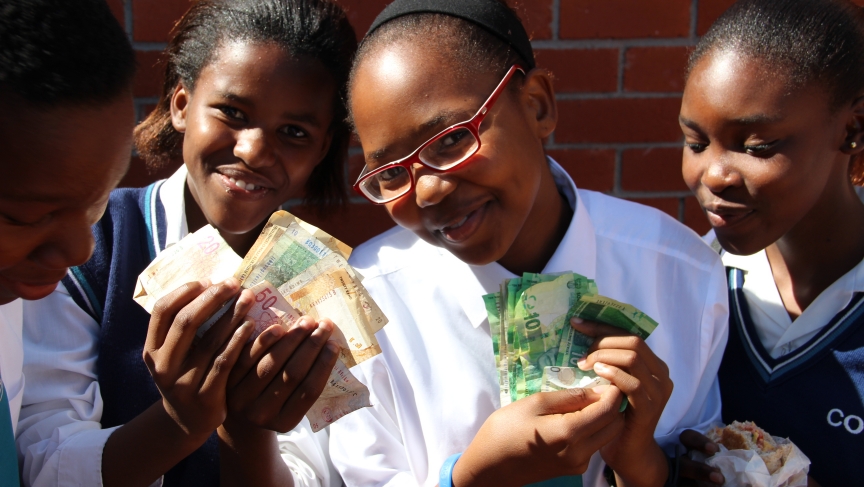 Sisipho (center) and her friends show how much money they've made selling sandwiches.

At 10:25 each morning, students at the Centre of Science and Technology (COSAT) get their first break of the day. They line up at the school’s snack shop to buy potato chips, cookies, and soda.

Sisipho, a tenth-grader with trademark red glasses, wasn’t happy with this choice of snacks.

“That’s very unhealthy, and it causes children to have sicknesses,” she said.

So she and her friends got an idea. They decided to sell healthy sandwiches as an alternative. They began meeting before and after school to make the sandwiches — from chicken salad, cucumber, and brown bread. Then, they set up a table in the school courtyard to sell the sandwiches for 40 cents each. They were a hit.

Sisipho and her friends have been selling up to 400 sandwiches per week. In the process, they’ve made quite a bit of money.

Most of the girls are from extremely poor families, but rather than spend the money on themselves, they decided to spend it on kids who needed it even more: some severely disabled children who live in a nearby home. The girls wanted to have a picnic with the children. So Sisipho and her friends hired drivers and vans, and took the disabled kids to the beach.

Sisipho says she and her friends still had some money left over, so they decided to do something more permanent for the kids. They hired an artist to paint the inside of the children’s home. Previously, the walls had been plain white. Now, they’re covered with red and yellow flowers, clouds, and a teddy bear sleeping on the moon.

The girls say the experience taught them a lot about compassion, and treating people the way they would like to be treated. And, it’s gotten them in the habit of giving. The girls are continuing to sell sandwiches, for a new cause. Profits are now going toward the senior prom. The girls are sophomores, so they won’t be attending.