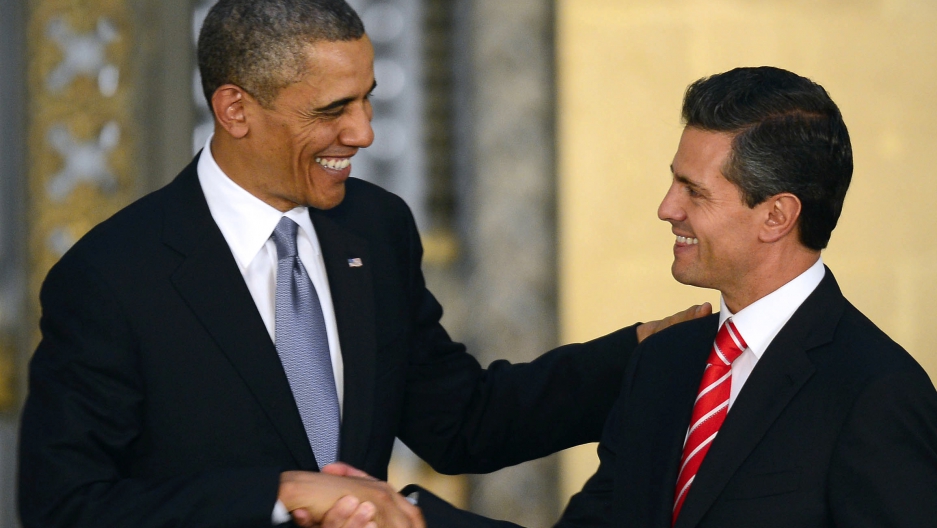 US President Barack Obama and Mexican President Enrique Pena Nieto at a joint press conference at the National Palace in Mexico City on May 2.
Credit: Alfredo Estrella
Share
#reactionDiv_gig_containerParent { display:none; }

On an overnight visit to the Mexican capital, Obama said his administration understands and supports Peña Nieto's aim to shift strategies in the fight on organized crime to focus on reducing violence. That shift has led to a widely reported weakening of the close cooperation with Mexican counterparts enjoyed by US intelligence and law enforcement agencies under Mexico's previous president, Felipe Calderon.

“We look forward to continuing our participation in any way the Mexican government feels appropriate,” Obama said at the press conference in Mexico City's ornate National Palace.

The Peña Nieto administration, which took office five months ago, has been working overtime to change the international conversation about Mexico from that of violence to the country's economic potential.

"We don't want the relationship to focus on one particular issue,” the Mexican leader said.

Mexico is the United States' third-largest trading partner, and the US is Mexico's top export market. Cross-border business totals $500 billion a year.

Is Obama here to help?

But many ordinary citizens, especially those among the country's impoverished and self-employed majority, seemed to have far less interest in the visit, and very low expectations for what it might accomplish.

“Is he coming to help us?” asked Margarita Zaraga, 48, one of dozens of jobless women and men who gather in the leafy plaza of a colonial Mexico City neighborhood, hoping to find work as day laborers.

“Then he should be bringing jobs.”

Noting that many of the day laborers hadn't been able to afford breakfast, another man in the small crowd discussing the visit joked that the US president “at least should be bringing sandwiches and sodas, if he wants to be of use.”

It's not that people here bear Obama any particular animosity. A poll released Thursday by the newspaper Reforma reports the US president enjoys a 54 percent approval rating among Mexicans — about the same they're granting Peña Nieto — that climbs to two-thirds of respondents in the states closest to the Rio Grande.

But presidents come and go. Mexico's views of the United States — while generally favorable in these days of booming trade and cross-border family ties — have been forged through decades of conflict.

And memories tend to run long in these parts.

Any Mexican school child can tick off the wrongs committed by the United States: the loss of half their country's territory in the Mexican American War of 1840s, US marines' capture of the port of Veracruz in 1914, the US Army's invasion of northern Chihuahua state to capture Pancho Villa a few years after that.

The neighborhood, San Angel, where Zaraga and the other day laborers gather every morning holds a house built by a Spanish conquistador, was home to artists Diego Rivera and Rufino Tamayo, and hosts some of Mexico's more important politicians and business leaders.

But on a building to one side of San Angel's plaza, a plaque bears the names of Irishmen who fought for Mexico during the Mexican American war and were executed in this square by conquering US troops.

In the spirit of a friction-less visit, at least publicly, Peña Nieto shied away from injecting his opinion into US congressional debates over gun control and immigration.

Though he pointed out that Mexico has a strong interest in both — millions of Mexican migrants have flowed illegally north over the border, thousands of US-bought guns have poured illegally south — he said the debates were “domestic affair for the United States.”

Obama said that he's optimistic an immigration bill will pass Congress this time, despite failed attempts in the past, and vowed that efforts at gun control would continue.

“Ultimately Mexico has to deal with its problems internally and we do as well,” Obama said.

People tend to be skeptical of Peña Nieto's promises as well. Mexican presidents have been promising jobs and happier days for decades.

And many believe that Peña Nieto and his aides will find calming the drug violence and bringin the gangs to heel daunting at best.

“It's like trying to block the sun with a finger,” said Jorge, 56, a businessman who declined to give his full name, as he climbed into a barber's chair for a trim. “It's very easy to talk about solving all of this, of letting it go.

“But go out into the provinces and talk to people about the gangsters,” he said, “see the control they have, feel the fear. It's impossible.”

Obama gives a speech to Mexican youth at Mexico City's iconic Anthropology Museum on Friday morning, before flying to Costa Rica to attend a summit of Central American and Caribbean leaders.