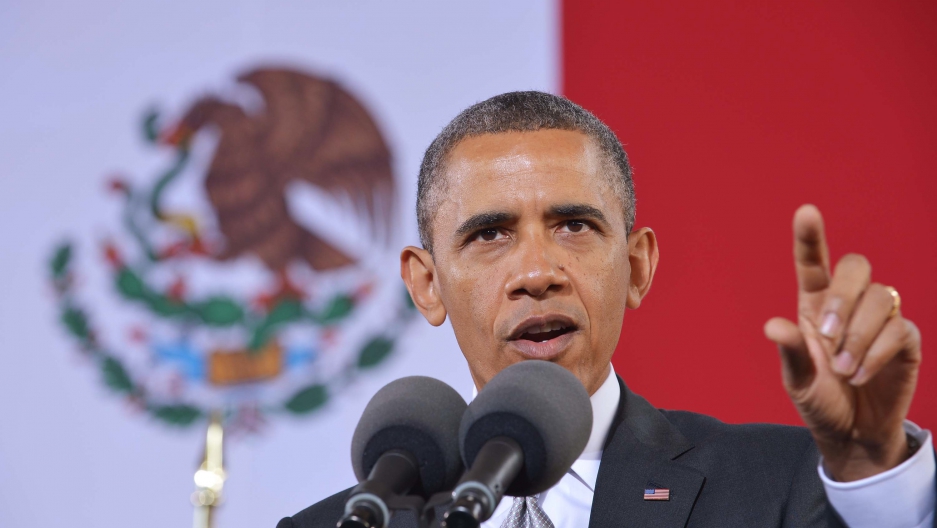 US President Barack Obama speaks on at the National Anthropology Museum on May 3 in Mexico City.
Credit: Mandel Ngan
Share
#reactionDiv_gig_containerParent { display:none; }

“It’s time to recognize new realities, including the impressive progress in today’s Mexico,” Obama told the appreciative crowd, gathered in a courtyard of Mexico City's iconic National Anthropology Museum. “Because of all the dynamic progress that's taking place here in Mexico, Mexico is also taking its rightful place in the world."

With light touches given the 70,000 people killed in little more than six years of US-backed drug war battling, Obama painted a picture of a Mexico that's an industrial power — particularly in the auto and electronics industries — where millions of people have escaped crushing poverty.

“You're the creators and the builders and the climbers and the strivers who can deliver progress and prosperity that will lift up not just the Mexican people for generations to come but the entire world. You are the dream. This is your moment,” Obama told Mexico's youth, many of them from the country's more affluent families.

Obama arrived in the Mexican capital Thursday afternoon for a 21-hour visit mostly dedicated to private meetings with new Mexican President Enrique Peña Nieto, who took office in December, and his senior aides. He flew from here to Costa Rica, where he's attending a summit of Central American leaders discussing the region's own economic challenges and gangland violence.

Obama's motivational message jibed obligingly with Peña Nieto's campaign to transform the internal and global perceptions of his country from poverty and violence to economic promise and potential.

Peña Nieto's effort faces some high hurdles amid ongoing gangland carnage, a slowing Mexican economy and the persistent place of nearly half Mexico's 115 million people among the ranks of the poor.

By some estimates as many as 7 million Mexican youths neither study nor hold full-time work, arguably providing the gangs with ready recruits. Two-thirds of the working population works off the books in the informal economy, studies show. And the criminal wars have taken the heaviest toll on young men.

On Thursday, just as the US president was flying en route to Mexico, jobless men and women gathered in a plaza in an old colonial neighborhood of this sprawling capital.

Some had their doubts about what Obama's visit would achieve.

“Is he coming to help us?” asked Margarita Zaraga, 48, who was there hoping to find work as day laborers. “Then he should be bringing jobs.”

On Friday, the US president spoke to doubters in the region and back home.

"I understand that there are those both here in Mexico and elsewhere in Latin America but also back home in the United States who are skeptical of progress, who maybe doubt the capacity for us to make the most of this moment. Progress and success is never guaranteed," Obama said.

Acknowledging a measure of US guilt for Mexico's violence, Obama said the United States has to do more to reduce the demand for illicit drugs and to stop the flow of guns across the shared border.

He promised to push for US immigration reform and said he'd work on a program to send 100,000 US students to Latin America and give an equal number of Latin Americans the chance to study at US schools.

“Always remember that you have the greatest of partners, the greatest of friends, the nation that is rooting for your success more than anybody else, your neighbor, the United States of America," Obama told the crowd, before jetting off to Central America.

The audience warmly applauded Obama, but not everyone left convinced.

“I know it was a presidential speech and all, but it would have been better to talk about how all those things can happen,” said Julio Meyer, 18, a senior at the pricey American School who this fall will begin studying political science at American University in Washington.

“How is this future going to be achieved?” Meyer asked in flawless English. “Mexico is waiting to see when this will stop being rhetoric.”

Watch Obama's speech in Mexico below in its entirety, posted by C-Span.