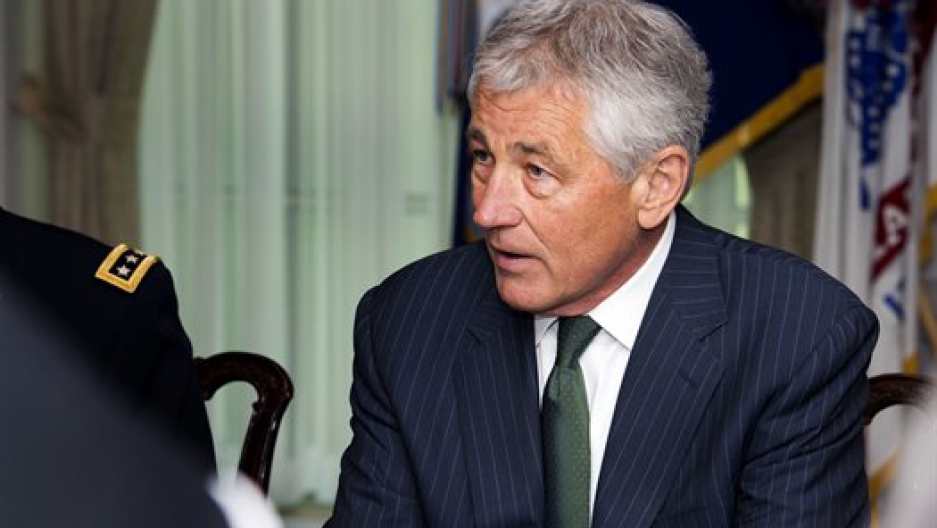 U.S. Defense Secretary Chuck Hagel at the Pentagon, May 2, 2013, said in a press conference that the U.S. was considering arming Syrian rebels. (Photo by U.S. Marine Corps Sgt. Aaron Hostutler.)

Obama Administration officials have been holding a series of high level meetings this week in response to rapid changes on the ground in Syria.

"You look at and rethink all options. It doesn't mean you do or you will" choose them, Hagel said. "These are options that must be considered with partners, with the international community: what is possible, what can help accomplish (our) objectives."

The administration is sifting through mounting evidence that the Syrian regime may have used chemical weapons. At the same time, while Syrian rebels associated with radical Islamist groups remain the most potent force against the regime, U.S intelligence agencies say important parts of the Syrian opposition may be breaking with Islamist affiliated groups, making U.S. cooperation with them possible.

The discussion of increasing U.S. involvement in the two year old Syrian conflict comes as the regime of President Bashar al-Assad insists the momentum in the long conflict has turned back in the government’s favor. Mark Landler, White House correspondent for The New York Times, said the United States has a certain level of confidence in Gen. Salim Idris' Free Syrian Army — one of the largest and most well-known rebel groups.

"He has been saying in recent days that he's breaking, very much, with Islamists with extremist elements," Landler said. "But there's also quite a bit of skepticism, and even pessimism, inside the White House that if you look across the whole front of opposition in Syria — there's just a lot of evidence of  radicalization."

Landler said this shift comes close on the heels of a meeting Secretary of State John Kerry had with the rebels, where he laid out a series of things the U.S. wants to see from them.

But while Idris is saying and doing the right things so far, still many of the most effective fighting forces are linked to extremist groups, Landler said.

"The challenge for Gen. Idris and for the United States, which supports him, is to see if they can buttress his position to give him the kind of credibility on the ground that some of these extremists groups enjoy," Landler added.