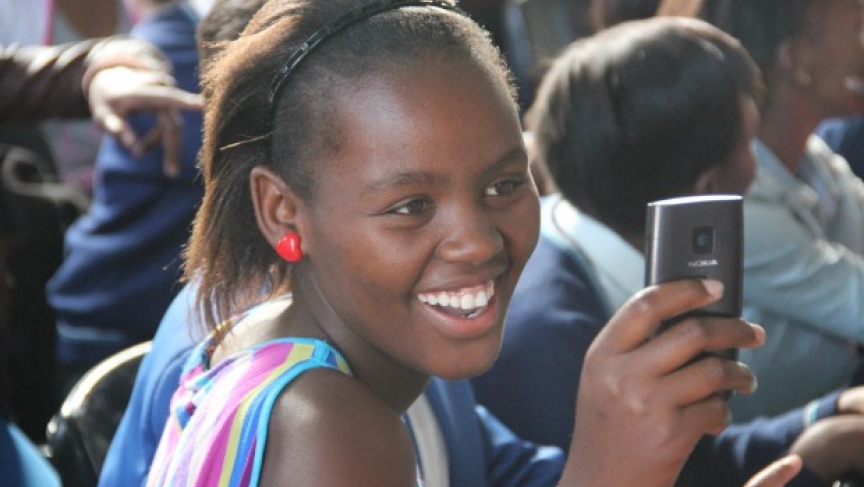 Bridgit, a junior at COSAT, and some of her classmates read books on their cell phones.

Over the last few years, there’s been a lot of buzz about cell phones in the developing world, and how they can be used to tackle major health challenges. Phones are incredibly common, even in rural areas, and they allow health workers to collect information and deliver important services.

Want to find out what teens in rural Africa think about sex? Send a survey to their phone. Want to provide eye care in a village with no doctors? Develop a cell-phone based eye exam.

Everywhere we turn, it seems there’s a new health problem that can be solved with a phone.

The same is true in education. Back in 2010, I reported on two projects that are promoting learning in South Africa through cell phones. One provides school lessons that can be watched or read on a phone; the other provides interactive cell-phone based books. These seemed like great ideas, particularly for students in rural areas, where schools often have no libraries and no books.

But, as with most supposed panaceas, I’ve been skeptical of the impact of these innovations. The technologies exist, but do kids actually use them?

So, I was heartened by a conversation I had the other day with a few COSAT students. I asked Tandie, a twelfth-grader, what she had done over the weekend.

“It’s through MXit,” she said.

MXit is a phone-based instant messaging program – it forms the largest mobile social network in Africa. The network has been adapted for many other uses, including reading books. Users can access stories for just a few cents.

“Isn’t it hard to read a book on a phone?” I asked Tandie.

I asked a few of her friends if they have also used MXit to read a book. Several said they had.

“So what book did you read?” I asked Tandie.

“Melvin the Dry Cleaning Zombie,” she said. I furrowed my brow. She was shocked that I’d never heard of it.

“It’s like, the most popular book in America right now,” Tandie said. She had gotten this impression from an ad on her phone.

“Well I guess I’m not keeping up with the times,” I said.

Later that day, I searched for Melvin the Dry Cleaning Zombie. It ranked at number 555,620 on Amazon’s best-seller list.

I think it’s great that Tandie is reading books on her phone – particularly ones that aren’t available in her library. Maybe all she needs now is an app that can help her separate truth from fiction in advertising.