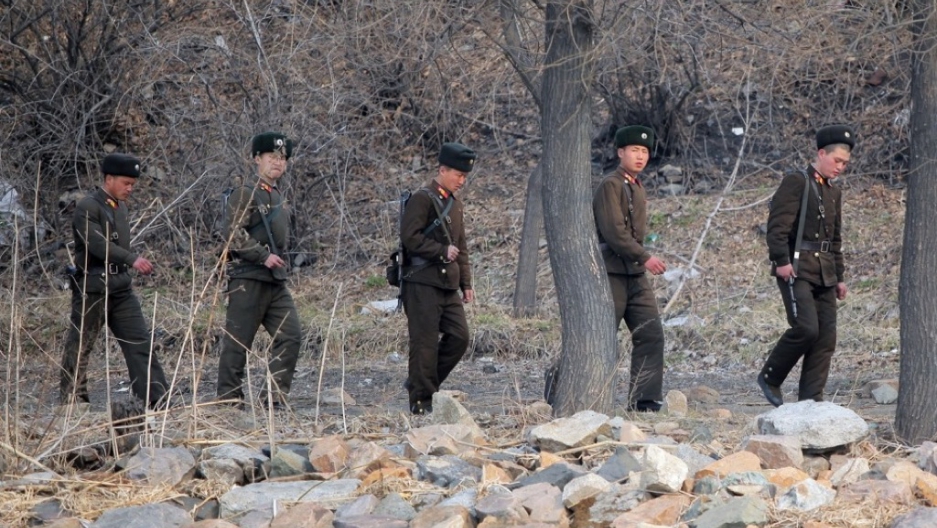 North Korean soldiers patrol along the bank of the Yalu River in the North Korean town of Sinuiju across from the Chinese city of Dandong on April 4, 2013.
Credit: STR
Share

The United States has called on North Korea to release immediately an American citizen sentenced to hard labor for anti-government crimes.

"We have concerns about the lack of transparency in this case."

Bae, also known as Pae Jun Ho, is accused of attempting to "topple" North Korea, according to state-run media. He has supposedly admitted to the charges.

More from GlobalPost: Why was an American jailed in North Korea?

The 44-year-old from Washington state was detained in the northeast city of Rason on Nov. 3 after entering North Korea on a tourist visa.

According to reports, he is a Korean-American who runs a travel company and was in the country to lead a tour group. A devout Christian, he had made several previous trips to North Korea to do humanitarian work, friends told the Associated Press.

Bae may have been arrested for taking photos of emaciated North Korean children in an effort to attract international attention to their plight, South Korea-based activist Doo Hee Yoon told Agence France-Presse.

That Pyongyang chose now to sentence him could be significant. The penalty was announced two weeks after North Korea calmed its war bluster, and US Secretary of State John Kerry tried to pull the country into talks to give up its nuclear program.

Many analysts in Seoul think that, like in the 2009 arrest of Euna Lee and Laura Ling for illegally crossing the border, Kenneth Bae will be used as a bargaining chip for future negotiations.

When Lee and Ling were put on trial and sentenced to 12 years' hard labor, Bill Clinton made a visit and met with Kim Jong Il. North Korean state mouthpieces portrayed the rendezvous as a diplomatic victory with a former American president. So far, many experts are suggesting that a similar situation could develop in the coming weeks.

There has been speculation that Jimmy Carter could seek a trip to North Korea, though Carter's spokeswoman said that the former US president had "no plans" to travel there.

The US, which doesn't have diplomatic relations with North Korea, is working with the Swedish embassy in Pyongyang to monitor Bae's case. Swedish diplomats last saw the American on April 26, a State Department spokesman said Thursday.