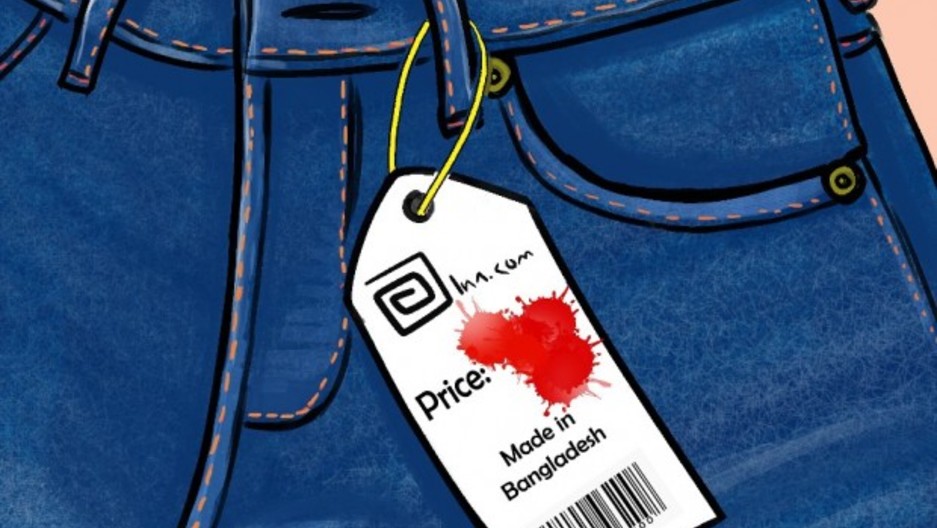 People around the globe have seen the heart-breaking images from the scene of the garment factory collapse in Dhaka, Bangladesh.

But Syed Rashad Imam Tanmoy, a cartoonist for The Dhaka Tribune, says it’s gut-wrenching to see it up close.

He visited the site the day after the collapse.

What struck Tanmoy immediately was that the official first responders (police, fire and ambulances) were set up to handle the victims but it was regular Bangladeshi citizens who were climbing in among the rubble to rescue survivors and bring out the dead.

That image became Tanmoy’s first cartoon about the tragedy.

Two weeks on, Tanmoy is still cartooning about the impact of the garment factory disaster.

His cartoons celebrate the outpouring of help from Bangladeshis rich and poor but they also call out episodes of political opportunism, like when the Bangladeshi Home Minister suggested that opposition party supporters may have shaken the walls and pillars of the factory, causing it to collapse.

Tanmoy says his readers complain that his cartoons are giving Bangladesh a bad reputation.

But Tanmoy — and other Bangladeshi cartoonists — are unmoved by the criticism.

They say calling attention to the causes of the garment factory disaster is the only way to improve working conditions and prevent future accidents.

Here’s a selection of cartoons about the Bangladeshi garment factory collapse — many of them by Bangladeshi cartoonists.

Marco Werman: Garment workers in Bangladesh returned to work today for the first time since that deadly garment factory disaster there last week. The death toll from the tragedy is now well over four hundred. There’s a lot of finger pointing going on in Bangladesh, but also here aimed at all the clothing retailers that have products manufactured in factories like the one that collapsed and there’s hand wringing among consumers everywhere who worry that they too are responsible for buying those cheaply-made clothes. All those issues are showing up in political cartoons, especially those drawn by Bangladeshi cartoonists. The World’s Carol Hills is with me. And, Carol, let’s remind listeners first that all the cartoons you’re going to tell us about now can be seen at theworld.org. You spoke with a cartoonist today in Dhaka in Bangladesh. Who did you speak with?

Carol Hills: I spoke with Syed Rashad Imam Tanmoy. He just goes by Tanmoy in his cartoons. He visited the site the second night with a colleague and the first thing that he was struck with, and it turned out to be his first cartoon about this, was the fact that the official emergency responders, the Bangladeshi fire and police, they were all there, but the people actually going into the collapsed building to pull out survivors and/or dead bodies were regular Bangladeshis, just regular citizens or relatives of those who were in the building. He says it’s since changed, but that really, really bothered him.

Werman: All right. Shame mounts upon shame. So what did Tanmoy have to say about how Bangladeshis have reacted to this tragedy?

Hills: He says it’s brought out the worst and the best. Let’s start with the worst. He said people have tried to gain political capital. The home minister of Bangladesh, he actually said that it may have been members of the opposition party, supporters of the opposition party, who shook the pillars, somehow shook the building and caused this. I mean it’s complete nonsense, but people are trying to get political capital out of it. In terms of the best, he said every Bangladeshi he knows, from rich to poor, have tried to help. His family, his colleagues, all sorts of people on the street, everyone is there. He said he saw a very old, very poor man who just had like a box of cookies and some water brought to the site. It has really, really affected everyone and he said that’s a good thing and he really feels like this could be a moment for Bangladesh where conditions in the factory start to change.

Werman: Of course, drawing about this in cartoons is going to bring out some pretty dark humor. How have Tanmoy’s readers been reacting to his cartoons?

Hills: You know, he’s gotten a lot of flak from his readers and he compared notes with other cartoonists and they’re getting the same thing, and a lot of it is about, “You can’t say this about Bangladesh. You’re giving us a bad name.” And he’s saying, “That’s not the point. The point is to draw attention to this.” He mentioned that another cartoon by a female Bangladeshi cartoonist that got a lot of flak and that one is in the slideshow and it’s a close-up of a pair of blue jeans and then there’s a tag on it that says “Made in Bangladesh”, the word “price”, and next to the word “price” there’s splattered blood. He also said that he’s concerned that all the attention is on the owner of the factory building, that he’s been portrayed as the villain, and he says that’s a misreading of this issue. He said there’s a whole line of people involved in approving land purchases, approving building designs, he said there’s a lot of culpability and it’s too easy to focus on just this owner.

Werman: Some powerful cartoons from Bangladesh and beyond. Carol has put together a slideshow of those cartoons about the garment factory disaster, including those by Tanmoy, the Bangladeshi she spoke with earlier today. You can see that at theworld.org. Carol, thank you.

Copyright ©2012 PRI’s THE WORLD. All rights reserved. No quotes from the materials contained herein may be used in any media without attribution to PRI’s THE WORLD. This transcript may not be reproduced, in whole or in part, without prior written permission. For further information, please email The World’s Permissions Coordinator at theworld@pri.org.