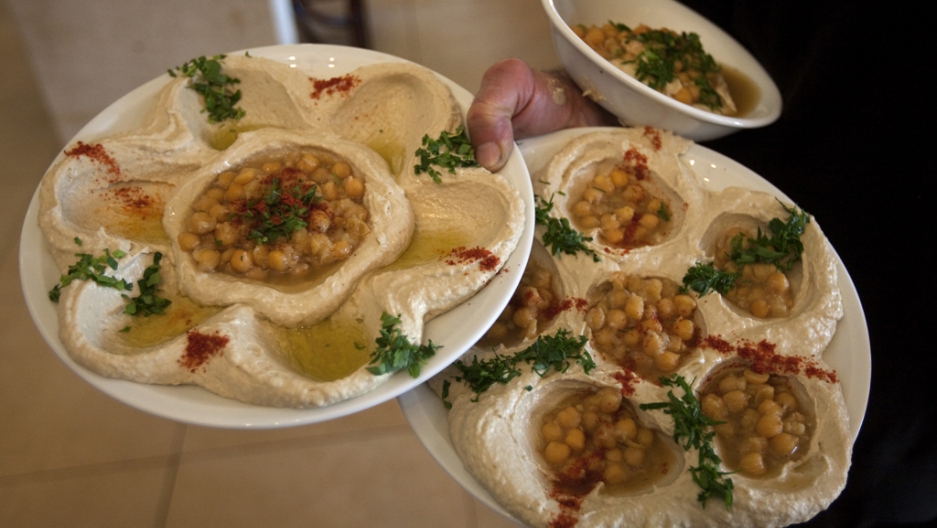 JERUSALEM — It used to be that when Israel and Lebanon were not actually at war, they engaged in well-publicized proxy battles over hummus.

But in a world gone upside-down, it now appears that the Commonwealth of Virginia may actually be winning the war. Which war? The chick-pea war!

"Hummus is conquering America" blasts a baffled Wall Street Journal headline, adding that in this unlikely battleground, both the Pacific Northwest, currently America's leading chickpea-growing region, and tobacco farmers, who are losing their fields to the tiny legume, are the vanquished.

The culprit here is the Sabra Dipping Company, a behemoth that currently holds 60 percent of the US market share in the high-protein, low-fat creamy Mideast staple.

Sabra, a joint venture owned by PepsiCo and the Strauss Group, an Israeli food conglomerate, is not only looking to diversify its American chickpea sourcing. It is also seeking scientific breakthroughs which will better the already hugely popular product.

Yesterday, Sabra inaugurated an R&D hub "devoted to the science, production, engineering, packaging and delivery of the chickpea-based spread," according to the Israeli daily Ha'aretz.

The facility is called the "Center of Excellence," and is located next to Sabra's Richmond plant.

In the United States, hummus it is variously referred to as a dip or a spread, but in the land of its origins, it is considered a principal food group. It is also considered magnificent.

Lest you scoff, consider the case of Hummus Abu Shukri, as iconic a symbol of Jerusalem as any of the nearby holy sites. According to Frommers, it has received positive write-ups in such august publications as the New York Times, Condé Nast Traveler and Playboy magazine.

Abu Shukri's hummus is "so spectacular," Frommer's reports, "that in more tranquil times, people in Jordan used to send out for it in insulated ice chests, and lines of Israelis waited for tables on Saturday afternoons."

The lines of Israelis, Arab and Jew, are still there, and not just on Saturdays. Most of them, if barely prodded by an inquisitive reporter, will proudly volunteer the fact that Abu Shukri was the hummus favored by Jordan's late King Hussein.

"What?" he asked. "Is this a joke?" the question melting into a low, long-lasting chuckle.