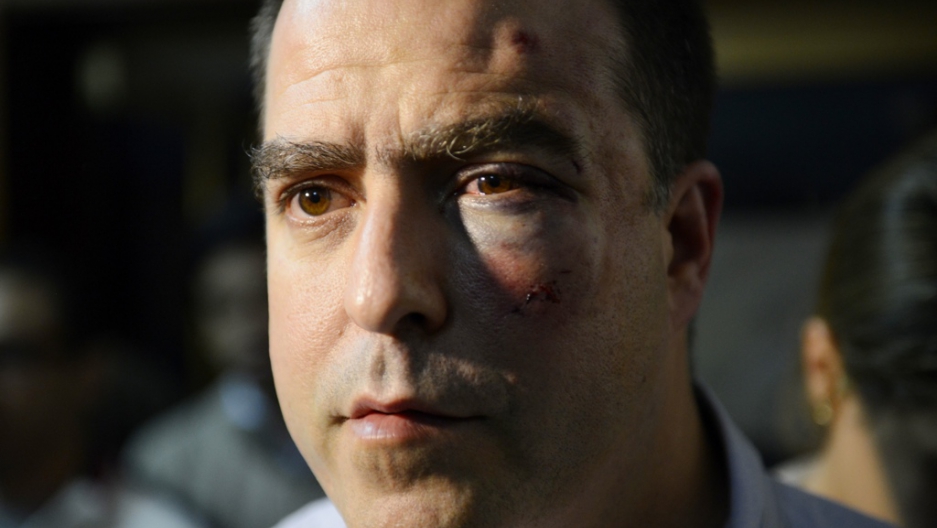 Both pro-government and opposition lawmakers blamed each other for sparking the violence, which left about half a dozen of them with bruised and bloodied faces. Punches were thrown and witnesses say that tables, chairs and laptops were flung around the legislative chamber.

Videos of the event, which was closed to the media, were published online and propagated by opposition lawmakers.

Venezuela’s political opposition has refused to accept the results of the April 14 presidential vote, which election officials say was won by Hugo Chavez’s chosen heir, Nicolas Maduro, by fewer than 225,000 votes. Opposition leader Henrique Capriles Radonski has called for a recount and accused the government of fraud.

Chavez loyalist Diosdado Cabello, the head of parliament, banned lawmakers who refuse to recognize Maduro as president from speaking on the floor. (Most foreign leaders — with the exception of US President Barack Obama — have recognized Maduro's presidency.)

In response, opposition members held up a banner reading, “parliamentary coup,” and called pro-Maduro lawmakers “fascists,” according to witnesses. (The photo below was provided to GlobalPost by the office of opposition lawmaker Maria Corina Machado.)

An opposition party founder, Julio Borges, became the public face of the violence as he appeared on pro-opposition television network Globovision with blood running down the side of his bruised face.

Staring straight into the camera, Borges said: “They can beat us, jail us, kill us but we won’t sell out on our principles. These blows give us more strength ... Mr. Cabello, you are digging the grave of your whole revolutionary process.”

Speaker Cabello responded late last night on state TV accusing the opposition of coming to the assembly with the aim of causing violence.

May Day (May 1) marches are taking place around the world, but in Venezuela they will have a distinct edge that many fear could flare up into more violence.

Both pro-Maduro and opposition supporters will march through Caracas, though their leaders have made calls for them not to clash, after eight were killed in post-electoral street violence last month.

Both Maduro and Capriles seem to be taking stock of the political implications of violence. Soon after the killings — which reportedly claimed victims from both sides — Capriles asked supporters not to march, fully aware that he would be blamed for any deaths that occurred.

“[The violence] is doing me harm,” he told supporters earlier this month.