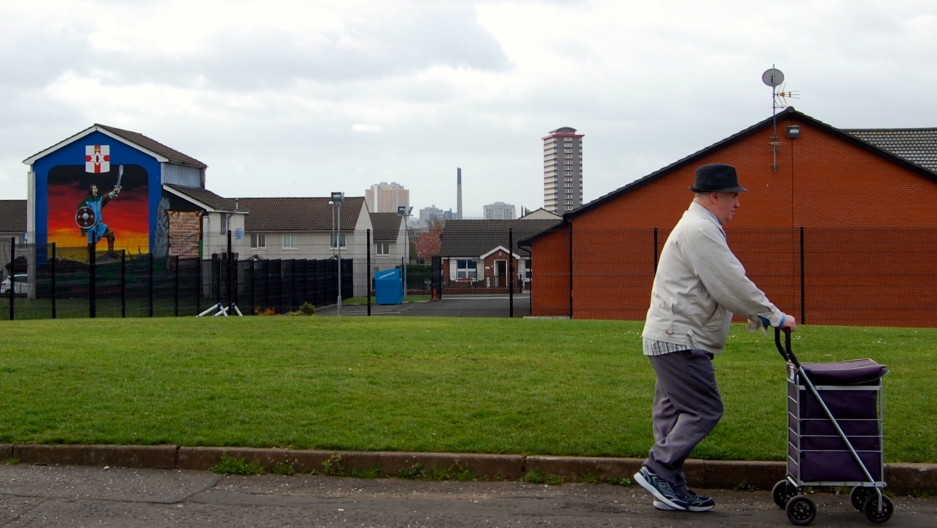 A man walks through the Shankill Estate, a public housing complex in a predominantly Protestant neighborhood. Many in Belfast say their communities have yet to reap the economic benefits of peace.
Credit: Corinne Purtill
Share

Editor's note: This story is part of a three-part series on simmering tensions in Northen Ireland. Read about how the Union Jack and an old prison have sparked new outrage.

BELFAST, UK — “Suitcases,” says taxi driver Pat McArdle from behind the wheel of his cab.

More than the swank new eateries in the city center, more than the shops and nightclubs stripped of old bombproof security gates, it’s the sight of visitors wheeling luggage that reminds him how much Northern Ireland’s capital has changed in a decade and a half.

There were no tourists before peace came to Belfast. Even locals refrained from venturing into the city center after dark. That began to change with the signing of the Good Friday Agreement 15 years ago last month by the governments of Ireland and Britain and Northern Ireland’s political parties.

The treaty marked the end of “the Troubles,” the 30-year conflict between Irish republicans and pro-British unionists that claimed more than 3,700 lives.

People here say life in Belfast has transformed to a degree nearly unimaginable 15 years ago. But that’s not true for everyone: In the working-class neighborhoods that suffered the worst of the murders, bombings and violence, there’s a widespread perception that the real dividends of peace have paid out only for the advantaged few.

“They’re trying to make it a better place to live, but that doesn’t seem to have happened,” says Paul Ferguson, 50, a community activist in a loyalist neighborhood off the Shankill Road, the main drag in the Protestant side of west Belfast.

On this side of town, Irish tricolor flags and Gaelic street signs identify Catholic streets and red, white, and blue-painted curbs and fluttering Union Jacks denote Protestant ones. The main shopping thoroughfares are pocked with chipped concrete, graffiti and kebab shops that never seem to open their metal shutters.

These neighborhoods face the same economic crises threatening many inner cities in post-industrial, austerity-era Europe. The factories and shipyards that once provided Belfast residents with secure employment are gone.

Now the state is the leading employer.

More than 20 percent of the population lives in poverty, and stark income discrepancies remain between Catholic and Protestant communities. There are more so-called “peace walls” — physical barricades separating Protestant and Catholic neighborhoods — than there were in 1998.

The trauma of the recent past, along with lingering sectarian tensions easily manipulated for political gain, mean that for all Northern Ireland’s progress in the last 15 years, much work remains to be done.

“Transition is challenging for people who have been so badly hurt,” said Mark Thompson, the founder of Relatives for Justice, which works on behalf of victims’ families. “There’s a lot of unresolved hurt in our community across the community.”

McArdle, the cab driver, who remembers hurling rocks at police and British soldiers on the streets of his Catholic neighborhood, has his own take.

“If I go to Australia and someone tells me there hasn’t been a shark in that water for 15 years, I still ain’t gonna swim in it,” he said.

The Good Friday Agreement disarmed the Provisional Irish Republican Army and other paramilitary groups whose violence claimed thousands of lives. It reformed the region’s police force and stipulated that the six counties partitioned from the rest of Ireland in 1921 would remain part of the United Kingdom, unless a majority of the people in Northern Ireland and the Republic of Ireland voted otherwise.

Today, no group claims a majority in Northern Ireland. In the last census, in 2011, 48 percent of the population identified itself as Protestant and 45 percent as Catholic.

Central Belfast has taken advantage of peace to remake itself into an attractive, tourist-friendly European capital. The omnipresent checkpoints, armed soldiers and spot-searches of the 1970s and 1980s are gone. New restaurants, shops and nightclubs have popped up in well-preserved Edwardian buildings, and people feel safe enough to patronize them.

Last year marked the opening of a glittering $150 million museum complex dedicated to the Titanic and the Belfast shipyards that built the doomed vessel (plus many more ships that stayed afloat, locals point out).

After London and Aberdeen, the seat of Britain’s oil industry, Belfast now boasts the greatest per capita share of multimillionaires in the UK.

And when its turn came to chair the G8 summit this year, the British government chose to host the June gathering of world leaders in the Northern Ireland resort town of Fermanagh. That would have been virtually unthinkable a decade ago, when the British Army still deployed troops to its corner of the Irish isle.

Not all of the promised reforms have come to pass, however. A bill of rights has yet to materialize. And changes that appear fair to some outrage others.

While Catholics say police reform has been a success, for example, many loyalists believe they were sold out by changes to what used to be a virtually all-Protestant organization. Graffiti condemning the service covers walls in Protestant neighborhoods.

“Were the economy not to have dropped, we’d be in a much better place,” said Michael Culbert, a former IRA member who now runs the group Coiste Na nIarchimi, which looks after former IRA prisoners. “People see the economic downturn and unemployment as somehow linked to the peace process.”

In December, protests erupted over a decision to reduce the number of days the Union Jack flies over Belfast City Hall.

The violence took many people by surprise, an unsettling reminder of unresolved tensions and how little it takes to mobilize young people into violent frenzy.

“If you don’t have a job and you come from a broken family and there’s a lot of intimidation in your community, that’s not a conducive environment for healing,” said Alan McBride, coordinator of the Wave Trauma Centre in Belfast, who lost his wife and father-in-law in an IRA bombing in 1993.

How — and if — Northern Ireland’s painful recent history should be addressed is also an ongoing question.

Belfast is dotted with memorial gardens and murals dedicated to those killed in the conflict. There have been several inquests into individual deaths and investigations into the degree to which the state played a role in some of the violence.

But much remains unsaid. With many of those who played key roles in the paramilitaries now occupying top spots in government, there seems to be no version of the truth that would satisfy everyone.

“It’s important not necessarily that the facts are told, but the stories are told, to make sure it never happens again,” said Danny Morrison, the former director of publicity for Sinn Fein, the Irish republican party associated with the IRA. He is famous for formulating the party’s “Armalite and ballot box” strategy of taking part in politics while maintaining armed struggle. But, he said, “I can’t see people now admitting to things which for good reason were kept secret in the past.”

The other side agrees.

“Who’s gonna believe anybody?” asked Jackie McDonald, a leading figure in the loyalist Ulster Defence Association, as fellow UDA member Colin Halliday nodded in agreement. Speaking of a former IRA member who is now Northern Ireland’s Deputy First Minister, he said, “If Martin McGuinness swore on a stack of Bibles, who would believe him? If people like Colin and myself were to tell the truth, who would believe us?”

Still, the drive for peace continues. Inspired by the AIDS quilt, the group Relatives for Justice invited families of those murdered in the conflict to create squares in memory of their lost loved ones. Green-bordered sections of the blanket hung last week in a mall off the Falls Road in a working-class Catholic neighborhood of west Belfast.

“I knew him,” said a shopper who pointed out squares representing dead friends and neighbors. She pointed to another. “I knew his mum.” And another: “He was just out having a birthday party for his children” when he was killed.

“Nothing’s changed,” said the 58-year-old grandmother, who declined to give her name. The neighborhood is still poor. Employers who ask applicants what schools they attended don’t call back if Catholic schools are named. Drugs and other social ills suppressed during the Troubles have surged.

The gates of the “peace walls” still lock at night, she pointed out: “That’s how far we’ve got, that the gates still have to close.”

An elderly woman in blue-frame glasses quietly scanned the quilt. It contains a square for her brother, killed in the conflict years ago, although his section wasn’t displayed today. Asked how it felt to see these names, she ran her fingers down her cheeks, tracing tears.

“I want to talk about it, because I want to tell somebody,” she said before shaking her head. “But then I have to walk away.”