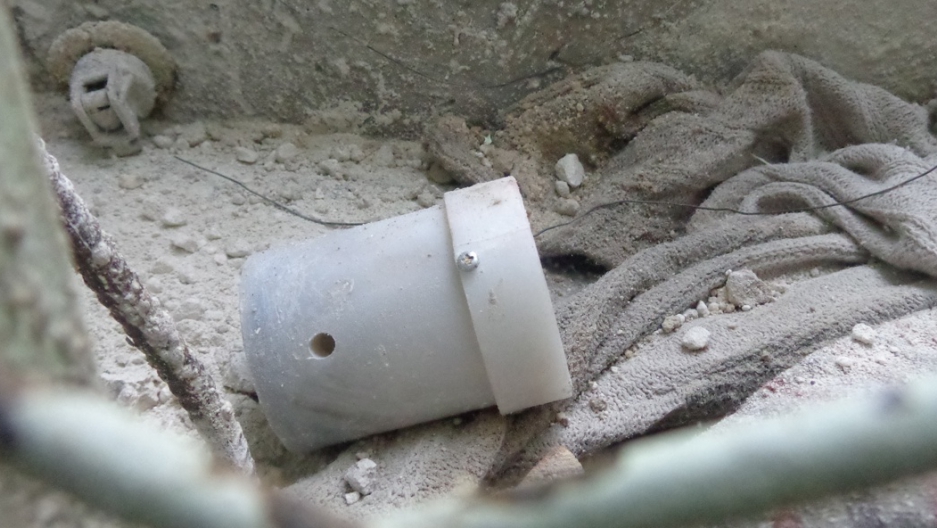 The main body of device found after an April 13 attack in the Sheikh Maqsoud neighborhood of Aleppo, Syria. Locals said it was evidence of a chemical attack. But a closer analysis reveals something different.
Credit: Rojhat Azad
Share

ALEPPO, Syria — Yasser Younes went to bed around midnight on April 13. When he woke up two days later, he was in a hospital, and his wife and two young children were dead.

Younes, who lives in the Kurdish-controlled neighborhood of Sheikh Maqsoud, said he doesn't remember much from that night. He recalled waking up to a loud noise at 3 a.m. Opening the door, he said he saw smoke. And that was it.

At Avreen Hospital in Afrin, about 40 miles away, the doctors who received the emergency call said they had little doubt about what was going on. Dr. Kawa Hassan prepared his staff to receive 22 patients suffering from conditions he believed were caused by a chemical weapons attack.

“I received the call at 3:30 a.m.,” said Hassan, who has worked as the director of Avreen Hospital for the past eight months. “I had no idea what chemical it might be so we prepared masks and protective clothing. I was scared, not for myself, but for all of Syria. I didn’t think it would come to this.”

A closer analysis, however, raises doubts and highlights the challenge of confirming whether the Syrian government — or anyone else — is using chemical weapons. The reality could have major implications for Syria and beyond, prompting foreign powers to either intervene directly or continue with the status quo.

Looking at video and photos obtained by GlobalPost at the scene, experts say the spent canister found in Younes’ house and the symptoms displayed by the victims are inconsistent with a chemical weapon such as sarin gas, which is known to be in Syria’s arsenal. Sarin is typically delivered using artillery shells or spray tanks, not in the grenade-like device found in this Aleppo attack and in other similar attacks reported in recent days.

While analysts have not been able to identify the canister, they said tear gas, some kind of generated smoke, as well as any number of chemicals found in military munitions and devices, could also have been responsible. Chemicals used for riot control are not prohibited by the 1993 Chemical Weapons Convention.

In recent years, in other countries in the Middle East where security forces used tear gas on protesters, witnesses reported seeing victims foam at the mouth, convulse and twitch — the same symptoms seen in the Syrian victims.

Moreover, experts say an attack by sarin gas would cause virtually anyone who had come into contact with the toxin to immediately feel its effects. Exposure to even a very small amount of sarin could be lethal. While there were casualities in the Aleppo attack, most of the victims survived, which would not likely be the outcome of a sarin attack in a confined environment.

“This is a scary thing, there are many people on the ground who are in terror who might understandably make assumptions that are not necessarily accurate,” said Susannah Sirkin, director of international policy at Physicians for Human Rights, a nonprofit that has worked extensively on issues related to chemical weapons. “I think in the actual environment where these weapons might be used there’s fear, as well as a lack of expertise about how to diagnose or identify what’s happening, and people are struggling with that.”

Physicians for Human Rights, which in the late 1980s helped determine that Iraqi President Saddam Hussein used chemical weapons on Kurds in the country’s north, has developed a series of fact sheets detailing the symptoms associated with the chemical weapons believed to be held by the Syrian government, as well as the best practices for both treating victims and documenting cases. Sirkin said that aside from the immediate humanitarian concern, it is essential to properly collect the evidence.

"We believe it is very important to accurately document and/or prove their use," she said, referring to chemical weapons. Sirkin acknowledged that even if proper investigations are done, getting samples out of the country and analyzed is difficult. Indeed, Dr. Hassan told GlobalPost that he has so far been unable to get the canister collected at the scene of the April 13 attack tested by an independent source.

What faction of the Syrian conflict would be motivated to conduct an attack like the one on April 13 is unclear. Syrians at the scene were quick to point fingers at the government. Numerous locals in Sheikh Maqsoud said they heard a helicopter fly overhead just before the attack, and only the government has access to aircraft. None of the witnesses GlobalPost interviewed, however, said they saw the projectile come from the helicopter.

The Sheikh Maqsoud neighborhood is itself a microcosm of how complicated the Syrian conflict has become. A Kurdish militia controls the area and has set up defensive lines, but has otherwise refrained from taking sides, criticizing both the government’s violent response to the civilian uprising and the increasing presence of extremists among the rebel ranks.

Earlier this month, however, the Kurdish militia — known as the Popular Protection Unit, or YPG — gave permission to Free Syrian Army forces to enter their territory to attack government positions. The brief alliance was quickly shattered last week after the rebels accused the Kurds of double-crossing them and clashes erupted.

Dr. Hassan said he thought the government was attempting to scare the Kurds in Sheikh Maqsoud — using a small attack with some kind of chemical — to prevent them from working again with the rebels.

Others accuse the Free Syrian Army of trying to rope foreign powers into the conflict by feigning a chemical attack.

The Syrian government has little to gain from speculation that chemical weapons are being used in Syria. US President Barack Obama has said on several occasions that the use of chemical weapons would be a “red line” and a “game changer,” and could compel the United States to intervene more directly.

The governments of Israel, the United States, France and Britain have all recently claimed to have evidence that chemical weapons were used in Syria. US officials pointed to two attacks in March, but didn’t release any more details.

More from GlobalPost: What would intervention in Syria look like?

Despite the growing calls from global intelligence communities and US lawmakers, the United States has so far held off on any full-scale intervention. Obama said in a press conference Tuesday that his administration wanted more evidence before making any decisions.

For the United States, any intervention is complicated by the presence of religious extremists, both foreign and domestic, among the ranks of the opposition.

The Obama administration is concerned about what kind of leadership might take the place of Syrian President Bashar al-Assad, and that any material military support could end up in the hands of extremists.

Meanwhile, the conflict has now dragged on for more than two years, claiming the lives of more than 70,000 people. In such a climate, Syrians are quick to assume the worst. On April 13, they did just that.

“When we arrived on the scene I saw the bomb canister. It was not a heavy explosive,” said Toul Haldun Zagroz, a Kurdish police officer in Sheikh Maqsoud. He said he was part of the second team to arrive at the scene, adding that many of the police and rescuers on the first team ended up in the hospital with similar symptoms as the victims.

“There was a white powder covering the stairs but there was no smell or smoke. It did not even occur to me that it might be a chemical, but when we went inside we saw the children dead and the Kurdish police who had arrived before us were on the ground foaming something white from their mouth. Their eyes were so red.”

Zagroz himself would later suffer similar symptoms. About 30 minutes after entering Younes' home, he was taken to the hospital to be treated for dizziness, severe headache, blurred vision and stomach pain.

Dr. Hassan said he doesn't know for sure what chemical is being used, but he believes the symptoms were consistent with sarin gas. Experts dispute this, pointing out that if it were sarin, even people who came in contact with victims would be vulnerable to severe illness or even death.

Dr. Hassan said the 22 patients brought to Avreen Hospital after the attack were stripped and scrubbed, and their clothing and blankets used during transportation were burned.

A medical report released by the hospital said the patients were unconscious or semi-conscious, trembling and foaming from the mouth and nose. One died after arrival but the others recovered within five days. Several doctors were also affected, including Dr. Hassan.

“My effects were mild, but one doctor had to be admitted to be ICU,” he said.