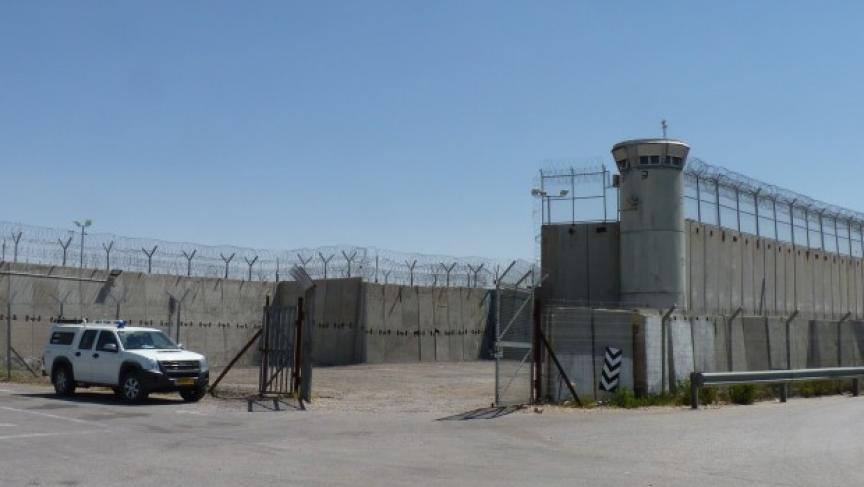 Israel's main detention facility, Ofer Prison, is outside of the Palestinian city of Ramallah. (Photo by Matthew Bell.)

His health had been deteriorating as he went on and off hunger strike for some eight months. There were warnings that his death could spark widespread unrest.

The Issawi story now looks like a crisis averted. He has stopped his fast and will be released after serving another eight months in prison. Then, Israel will reportedly allow Issawi to return to his home in Jerusalem. But the broader issue of Palestinian prisoners is not likely to fade away.

Palestinian political divisions run deep. But the prisoners issue — and the almost reverential status in Palestinian society given to prisoners serving time in Israeli jails — transcends those divisions.

The prisoners are almost universally treated as heroes by Palestinians, regardless of why they might be in jail. The Palestinian Authority even has an entire Ministry of Detainees and Ex-Detainees, led by Issa Qaraqe.

Speaking at a recent news conference in Ramallah, Qaraqe called two prisoners who died in Israeli jails this year martyrs. Qaraqe said that Arafat Jaradat and Maysara Abu Hamdiya died because of “torture and neglect.”

Israel says an investigation will be carried out.

On a recent morning, several dozen Palestinians waited in the semi-covered entrance to Israel’s main detention facility, Ofer Prison, near the West Bank city of Ramallah. They were visitors to the prison, there to see relatives and friends either serving time in jail or about to appear in military court.

A middle-aged widow sitting and waiting for her name to be called over the loudspeaker gave her name as Iqbal. She said she was at Ofer just to see her 18-year-old son. He was detained four months ago, charged with throwing stones at Israelis. Stone throwing can be a serious offense. A young Palestinian man was just sentenced to two life terms for throwing a rock at a moving car and causing a crash that killed an Israeli father and his one-year-old son.

Iqbal says this is the second time she has gone through this. Her son was arrested two years ago at the age of 16 and he got a suspended sentence for rock throwing. Now he could be facing real jail time. Iqbal said she told her son not to throw stones.

“But he’s a boy,” she said. And she can’t really control him.

There are about 5,000 Palestinians in Israeli prisons. And that number has been going down. Six years ago, it was twice that many. Some 160, or about 3 percent, of current Palestinian detainees are held under administrative detention, the controversial practice of detaining suspects based on classified evidence.

During a rare tour of Ofer Prison for international journalists, administrative detainee Mahammed Ghazal, a 57-year-old engineering professor who’s been in prison for 17 month, said he still did not know why he was being held.

Ghazal’s wife Salaam, at the family’s home in the West Bank city of Nablus, described her husband as, “a person who seeks for the rights of the Palestinians.”

"He believes that we are a people who really have the rights and they need to struggle for them,” he said.

Ghazal said her husband is being held in Israel because of his beliefs. She said he has a strong Islamist ideology and, like most Palestinians, she said he also believes his people have a right to self-defense.

“We believe in it, but we did not practice it,” Ghazal said. “My husband — he is really, he’s very peaceful man. He never believe in any kind of violence.”

In a statement, an Israeli security official said Mohammed Ghazal is a senior official with the Islamic militant group Hamas. And that he is “involved in current activities that endanger public security.”

“The reality is that administrative detention is a necessary evil. It’s legal under international law, but I still wish we didn’t have to use it,” said Mark Regev, an Israeli government spokesman. “But when you’ve got these violent, extreme terrorist groups, sometimes you can’t put all the evidence in open court and you’re forced to use a tool like administrative detention.”

Palestinian Authority President Mahmoud Abbas is calling on Israel to release Palestinian prisoners to show its commitment to peace talks. Abbas has raised the issue with U.S. Secretary of State John Kerry. Regev was non-specific, but didn't dismiss the idea outright.

“We are ready in the framework of a peace process that is moving forward for mutual, reciprocal, confidence-building measures, as I say, taken by both sides,” Regev said. “I can’t go into specifics at this stage,” Regev said.

Regev also repeated a long-standing Israeli sore point. He suggested Palestinian officials need to stop holding up the prisoners, including those convicted of killing civilians, as heroes.