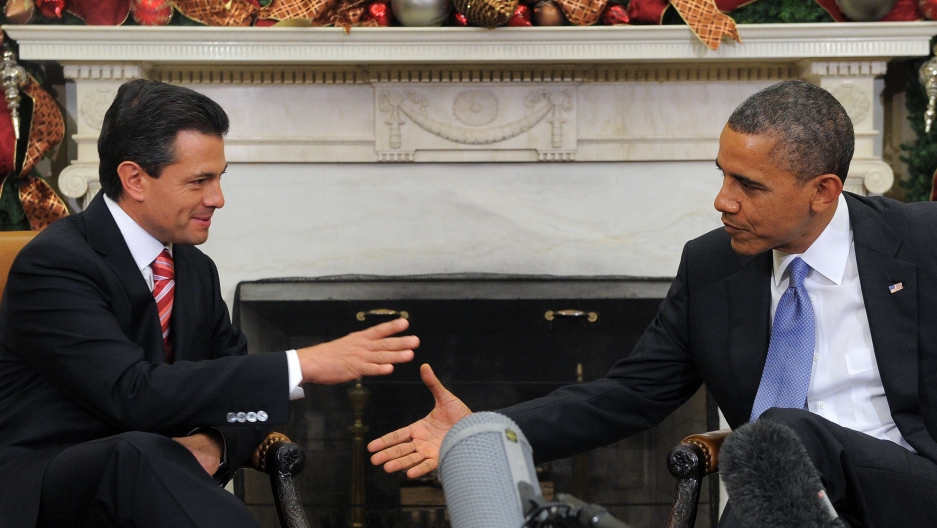 US President Barack Obama shakes hands with Mexico's then-president-elect, Enrique Peña Nieto, during a bilateral meeting in the Oval Office at the White House in Washington on Nov. 27, 2012.
Credit: Jewel Samad
Share

MEXICO CITY, Mexico — Amid the clamor framing President Barack Obama's overnight stop in Mexico's capital Thursday, smarter folk will be listening to the sounds of silence.

Because in such whistle-stop summits national leaders usually strive to accentuate the positive.

But more than the happy chatter — about trade, economic reforms and enduring friendships — what Obama and Mexican President Enrique Peña Nieto don't say, at least publicly, may be more telling about their countries' close but often conflicted relationship.

Analysts say US officials privately have been chewing nails over what might be Peña's dismantling of their close involvement in Mexico's six-year campaign against its crime lords.

Washington has earmarked $1.9 billion in equipment and training for Mexican security forces as part of that effort.

The drug war, which in Mexico has claimed some 70,000 lives and left another 25,000 missing, so far has failed to curtail either drugs heading to US consumers or gangsters preying on Mexican communities.

Peña's government has a lot riding on the immigration reform debate brewing in the US Congress — the most viable effort in a dozen years. It's vitally important to the estimated 6 million Mexicans living illegally north of the border and to their families at home.

But past Mexican presidents have been burned trying to actively lobby on US immigration policy in the past.

Contentious immigration and drug war talk could get short shrift, in public, by the presidents and their aides.

“We've spent so much time on security issues between the United States and Mexico that sometimes I think we forget this is a massive trading partner responsible for huge amounts of commerce and huge numbers of jobs on both sides of the border," Obama said in turning to Mexico at the very end of a wide-ranging press conference Tuesday.

Mexico's economy weathered the 2008 global crisis better than many and is growing at nearly double the rate of the United States'. The two countries sell one another some $500 billion worth of products and services every year. Since taking office five months ago, Peña has pushed an array of economy-related reforms, many of benefit to US interests.

“We want to see how we can deepen that, how we can improve that and maintain that economic dialogue over a long period of time,” Obama said. “That doesn't mean that we're not going to be talking about security."

Obama also will focus mostly on economic issues, especially energy cooperation and development, at a meeting with Central American presidents in Costa Rica on Friday and Saturday.

But Honduras, El Salvador and Guatemala also are struggling with severe criminal violence of their own, much of it linked to the Mexican gangs smuggling narcotics to the United States.

“The vision here is that we want to make sure that our hemisphere is more effectively integrated to improve the economy and security of all people,” Obama said at the press conference in Washington. “That's good for the United States.”

Peña complains that both gangland violence and the shared strategy to confront it defined the relationship with Washington during the term of his predecessor, former President Felipe Calderon, from an opposing party that governed Mexico for 12 years. Peña comes from the Institutional Revolutionary Party, or PRI, that ruled Mexico for about seven decades.

Mexican officials have moved to scale back the close collaboration and intelligence sharing that developed under Calderon, analysts say. At the same time, they've worked aggressively to push the violence from both headlines and the bilateral agenda in an effort to improve Mexico's international reputation.

Opinions of thy neighbor

The country could certainly use an image makeover.

A poll released this week by the Chicago Council on Foreign Affairs and the Woodrow Wilson Center reports that Americans’ favorable image of Mexico is at the lowest point in two decades. While acknowledging Mexico is important to US interests, few polled knew it is one of the country's major trading partners.

In contrast, a recent survey by the Pew Research Global Attitudes Project reports that two-thirds of Mexicans have a favorable opinion of the United States, 35 percent of them would consider moving north of the border and about half expect Obama to do right by the rest of the world.

Obama's popularity in Mexico has improved since his first visit here four years ago, when his meetings with Calderon coincided with the deadly H1N1 flu outbreak that forced a weeklong shutdown of the Mexican capital. He met with Peña in Washington last fall, shortly before the Mexican leader took office.

With an eye on damage control, the presidents conversation this week “will focus on the economic dimensions of the relationship right now," said Duncan Wood, director of the Mexico Institute at the Woodrow Wilson Center, a Washington, DC, research center. "I think that the two presidents would like to say a great deal about that.”

Yet the criminal carnage is historic, the worst violence here since the Mexican Revolution of a century ago. It continues all but unabated, often on or near the US border. How can the issue not dominate the presidents' conversation?

Nine months after winning the presidency, Peña has yet to define the strategy he'll employ against the gangs; how it will differ from Calderon's; what it will really mean for cooperation with the United States.

“Peña Nieto campaigned on promises of a re-calibrated strategy on security and the Mexican public has been patient in granting his administration time to develop its approach,” Tony Garza, the US ambassador to Mexico during the Bush administration, said in a statement.

“But there are risks in the pace his team seems to have adopted, including mounting skepticism — at home and to some extent in the US — that the issue has not been given the priority it deserves.”

Peña's team has moved to consolidate the anti-crime effort under his powerful interior ministry — rather than having the various US and Mexican security and law enforcement agencies cooperate separately as occurred under Calderon. That may cripple the close working relationships that have been forged by lower-level agents from both countries, some analysts fear.

Over the past six years, US agencies, including the CIA, had direct access to Mexican counterparts and US planners favored working directly with the Mexican navy special forces in targeting major kingpins. Rivalries multiplied within the Mexican security forces, often hampering operations. That's being changed.

"Far from having a large number of agencies without coordination that are knocking on every door, the Mexican government has a single door called the Secretary of the Interior, " Sergio Alcocer, deputy foreign secretary for North America, told The Associated Press.

“There's a worry,” Shannon O'Neil, author of the just published "Two Nations Indivisible," a study of US-Mexico relations, says of the impact on joint anti-gang efforts. “The only way it really works is when you trust your counterpart. And now your counterpart is a bureaucracy.”

Such concerns almost certainly will claim a lot of the two leaders' face time, out of the public eye.

"We've made great strides in the coordination and cooperation between our two governments over the last several years,” Obama said in the press conference. “But my suspicion is, is that things can be improved.

"I'm not going to yet judge how this will alter the relationship between the United States and Mexico,” he said, “until I've heard directly from them to see what exactly are they trying to accomplish.”