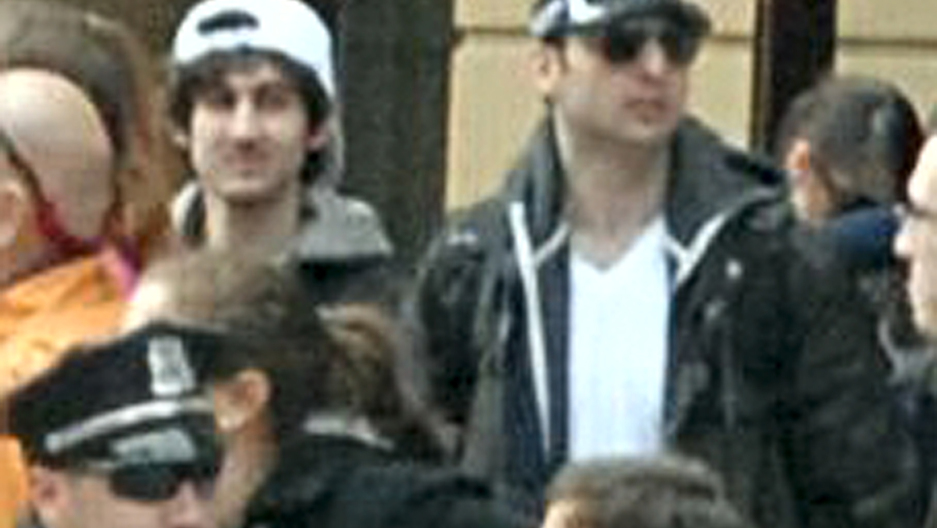 Dzhokhar, left, and Tamerlan Tsarnaev are seen at the Boston Marathon, moments before a bomb blast there killed three, maimed dozens and injured hundreds. (Photo courtesy of the Federal Bureau of Investigation.)

But when a reporter at The New York Review of Books tracked down the mystery man, whose real name, he says, is Mikhail Allakhverdov, he said that wasn't true at all.

In a blog post for the review, Christian Caryl writes:

Having been referred by a family in Boston that was close to the Tsarnaevs, I found Allakhverdov at his home in Rhode Island, in a lower middle class neighborhood, where he lives in modest, tidy apartment with his elderly parents. He confirmed he was a convert to Islam and that he had known Tamerlan Tsarnaev, but he flatly denied any part in the bombings. “I wasn’t his teacher. If I had been his teacher, I would have made sure he never did anything like this,” Allakhverdov said.

According to Caryl, Allakhverdov says he has been cooperating with the FBI.

The FBI declined to comment on the case, but Caryl writes that Allakhverdov’s statements “seemed to bear out recent reports that the FBI have not found any connection between ‘Misha’ and the bomb plot.”

"He was very, very anxious and nervous," Caryl said. "He'd sort of been expecting some journalist would trap him down, but having me there on the threshold of his apartment was clearly quite a shock for him."

Allakhverdov invited Caryl in, though, where he discussed how he knew Tamerlan Tsarnaev. But he was hesitant to discuss how he did know Tsarnaev.

The stress of the whole matter had put a great deal of stress on Allakhverdov's father, which Caryl said made it difficult for him to find out more than the most cursory of details without objections from family members.

"We never quite got to the position where I could find out the good stuff. There are a lot of questions that remain unanswered.