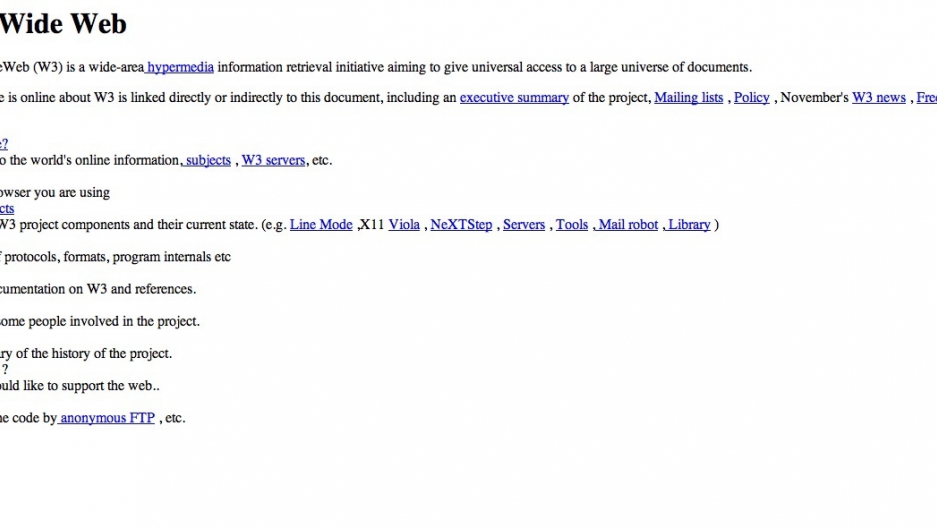 The European Organization for Nuclear Research (CERN) has republished the world’s first web page to celebrate the 20th anniversary of free public access to the World Wide Web.

The page is online here.

A CERN employee, Tim Berners-Lee, created the first website in 1989 as part of an effort to facilitate information-sharing between physicists at institutions around the world.

On April 30, 1993, CERN made the World Wide Web available to the public on a royalty-free basis.

"CERN relinquishes all intellectual property rights to this code, both source and binary form and permission is granted for anyone to use, duplicate, modify and redistribute it,” CERN stated in the document that placed World Wide Web technology into the public domain.

To mark the anniversary of this declaration, CERN has launched a project to preserve the world’s first website.

In a statement posted at the world’s first web address, http://info.cern.ch, the restoration team said: “We would like to restore the first URL – put back the files that were there at their earliest possible iterations. Then we will look at the first web servers at CERN and see what assets from them we can preserve and share. We will also sift through documentation and try to restore machine names and IP addresses to their original state.”

"I want my children to be able to understand the significance of this point in time,” Dan Noyes, the web manager for CERN's communication group, told BBC News. “The web is already so ubiquitous – so, well, normal – that one risks failing to see how fundamentally it has changed. We are in a unique moment where we can still switch on the first web server and experience it. We want to document and preserve that.”

Noyes told BBC News that one goal of the project is to remind people that the web was intended to be open and free for all in the hope that this would lead the world to become a fairer and more equal place.

"This universal access of information and flexibility of delivery is something that we are struggling to re-create and deal with now,” he said. “Present-day browsers offer gorgeous experiences but when we go back and look at the early browsers I think we have lost some of the features that Tim Berners-Lee had in mind."

More from GlobalPost: Google chief to isolated Myanmar: the 'net will set you free