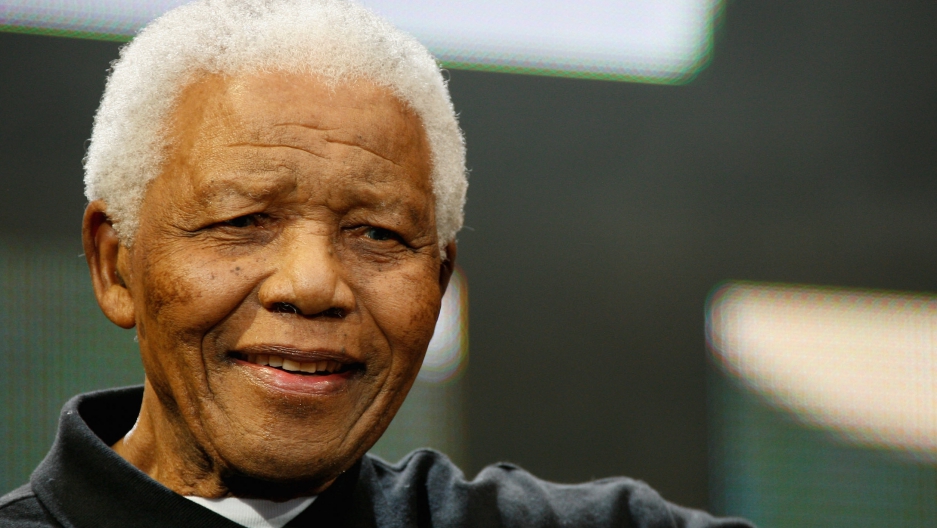 JOHANNESBURG, South Africa — Nelson Mandela sits stiffly in an armchair, staring blankly ahead and seemingly unaware of his surroundings, while leaders of the ruling party laugh and pose around him for the cameras.

“Smile!” someone says repeatedly, but Mandela doesn’t, instead closing his eyes after a flash goes off in his face. He doesn’t interact with any of the cheery visitors, including President Jacob Zuma, who nevertheless clasps the former president’s hand and gives a “thumbs up” sign.

This video, the first public images of Mandela in nine months after two lengthy hospital stays, was meant to reassure a worried public. Instead, it has sparked concern among South Africans, not only that Mandela is ailing but also that their beloved national hero is being exploited by family members and colleagues toward the end of his life.

Facing a backlash from many South Africans, the ruling African National Congress — Mandela’s party, in power since he became the country’s first black president in 1994 – has been forced to respond to the accusations that it is using Mandela in an undignified way and for political gain.

The ANC appeared surprised by the negative response to the video, and on Tuesday released a statement noting “the determined efforts by some sections of our society to degrade the visit of the National Office Bearers to Comrade Nelson Mandela.”

The visit by Zuma, along with ANC deputy president Cyril Ramaphosa and national chairperson Baleka Mbete, “was in line with the accepted norms of Ubuntu that we value our elderly,” the statement said.

“Such should never be used for political opportunism or to mask what we believe is the fear of South Africans to accept that President Mandela is mortal and aged,” the statement continued. “There is no reason to be alarmed by the visuals of an elderly person who clearly is receiving the necessary care and attention.”

More from GlobalPost: South Africa: Desmond Tutu in the hospital

Much of the public reaction wasn’t to do with fears of an aging Mandela, but rather what appear to be regular intrusions on the anti-apartheid struggle icon. He is in ill health as he approaches his 95th birthday in July.

Mandela’s family members have in the past year launched new money-making ventures that trade on his famous name, ratcheting up a battle for control over his name and legacy.

Two of Mandela's daughters last month launched a court action over control of companies that Mandela had put under the direction of high-profile South Africans, including human rights lawyer George Bizos.

More from GlobalPost: Keeping up with the Mandelas

Meanwhile, elections will be held in South Africa in less than a year, with Zuma standing as ANC leader.

While the party has won a strong majority in every election since 1994, it faces growing challenges from the opposition Democratic Alliance, as well as from businesswoman-turned-politician, Mamphela Ramphele, a veteran of the anti-apartheid struggle, and her upstart Agang party.

When the video aired during Monday’s evening news in South Africa, after being promoted by the state broadcaster as exclusive footage of Mandela “looking relaxed and well,” a nation recoiled from the images that seemed worlds away from the description.

“We had some conversation with him, shook hands, smiled — as you can see, he’s really up and about,” Zuma told a reporter with the South African Broadcasting Corporation outside Mandela’s house in the Houghton neighborhood of Johannesburg.

Mandela, known in South Africa by his Xhosa clan name “Madiba,” was released from hospital just three weeks ago after 10 days of treatment for pneumonia. He was hospitalized for 18 days in December, for treatment of a lung infection and surgery to remove his gall bladder.

Pictures of Mandela over the past few years have similarly been taken with him sitting in an easy chair with a blanket covering his lap, although smiling and appearing engaged, often with a stack of newspapers at hand.

“After everything the man has done for us this is how we treat him. Like an animal at the zoo. Shame on us,” tweeted Brent Lindeque from Johannesburg.

“Madiba looked more like a prop in that photo op with the ANC bigwigs. Made me feel uneasy,” wrote Iman Rappetti.

Makaziwe Mandela, the statesman's eldest daughter, also lashed out at Zuma and the ANC for allowing cameras to record their visit.

“There’s nothing wrong with the president and the movement going to see him but I don’t know how the thing got out of hand - I don’t think it was in good taste, it was undignified," she told The Daily Telegraph.

The camera flashes seen in the video were a particular source of anger. Mandela’s eyes are said to be sensitive after years spent working in a blindingly bright limestone quarry during his imprisonment on Robben Island.

Photojournalist Adrian Baillie-Stewart, who has photographed Mandela in the past, said it is known that Mandela is sensitive to flashes, and it was “shocking” to see a camera flash going off in front of his light-sensitive and aging eyes.

“During the time that I photographed Madiba, I was instructed strictly not to use my flash when photographing him,” he commented on a South African news website.

McIntosh Polela, a police spokesman and author, said the images left him “dismayed.”

“If he were a member of my own family, I would plead for privacy,” he tweeted.