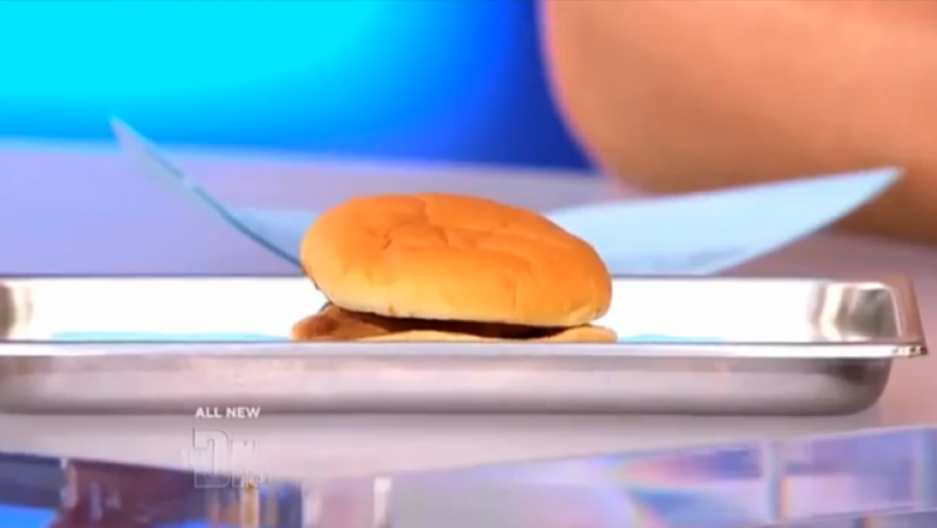 A McDonald's burger survived 14 years in a man's coat pocket and looks pretty much the same as it always did.
Credit: Youtube
Share

A man found an old McDonald's burger in his pocket... from 14 years ago!

Utah native David Whipple claims that his McDonald's burger has survived intact for 14 years and looks about the same as it did when he bought it.

Whipple was using the burger in 1999 to show friends how enzymes preserve food.

After his demonstration, he put the burger in his jacket pocket.

His jacket ended up in a closet and the burger wasn't discovered for a year or two. The couple then decided to keep the burger

The burger was pretty much exactly how it was when purchased.

There were no signs of mold or decay.

Good news is that the pickle on the burger had disintegrated naturally leaving a nice imprint on the patty.

Whipple and his burger were recently featured on the television show The Doctors who were bemused by the McDonald's meat.

McDonald's had their own explanation for the elderly burger:

In the example of a McDonald’s hamburger, the patty loses water in the form of steam during the cooking process. The bun, of course, is made out of bread. Toasting it reduces the amount of moisture. This means that after preparation, the hamburger is fairly dry. When left out open in the room, there is further water loss as the humidity within most buildings is around 40%. So in the absence of moisture or high humidity, the hamburger simply dries out, rather than rot.

Worse still, Whipple apparently had a buyer on eBay who was willing to pay $2000 for the crusty patty.

Choosing fame over money, Whipple relented in the end and decided to hold on to the burger.