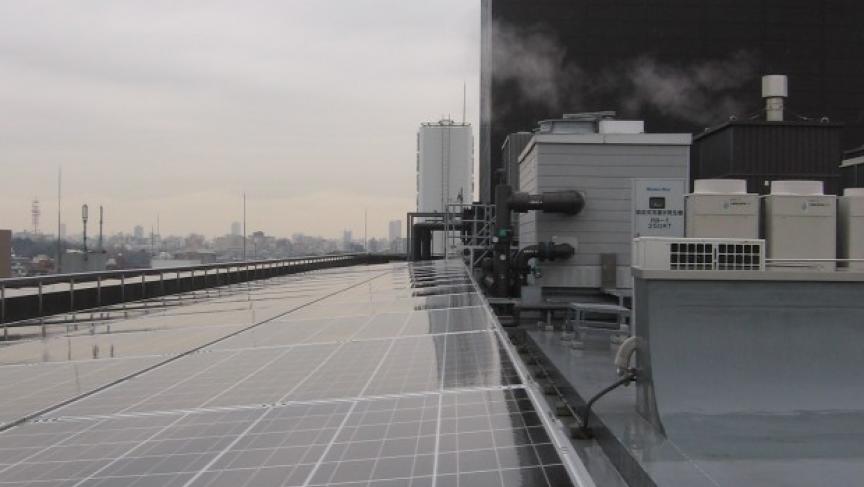 After the nuclear disaster in Japan, Johnan Shinkin credit union installed solar panels on the roof of its Tokyo headquarters so it could stop using power generated by nuclear plants. (Photo by Catherine Winter.)

In the lobby of the Johnan Shinkin credit union in Tokyo, tellers work under energy-saving LED lights.

In the elevator, there’s a poster urging workers to come to the office dressed warmly in winter so the heat can be set low.

An upstairs conference room has three fluorescent ceiling lights, and one is turned off.

That's where Tsuyoshi Yoshiwara, the CEO of the bank, is trying to make a point.

“After the accident at Fukushima,” Yoshiwara said, “people said, ‘there’s an electrical shortage, and so we have to have nuclear plants.’ But that’s propaganda. My company shared the responsibility for electrical demand, so I felt energy conservation would be a strong means of stopping the nuclear plants.”

So the bank cut its electricity use by 30 percent, the same percentage as Japan used to get from nuclear power before the Fukushima meltdown.

Yoshiwara wants his customers to conserve, too. Customers who reduce their electricity use can get a better interest rate on their deposits. And they can get zero-interest loans to invest in power saving devices and renewable energy.

The bank itself has installed solar panels on its roof, which officials say power all the lighting on the first floor — even in winter. And it tries to buy the rest of its electricity from companies that don’t use nuclear power.

After the Fukushima meltdown, the bank cut off its contract with TEPCO, the company that owns the broken nuclear plant. Yoshiwara also joined a lawsuit trying to force the government to decommission another nuclear plant.

Yoshiwara has gotten a lot of press for these moves, both good and bad. But he says his activism hasn’t hurt the bank’s bottom line. Just the opposite, he says.

“Customers who were not just interested in personal gains or losses but actually felt a social responsibility — more and more of them transferred their business to Johnan Shinkin,” he said.

Johnan Shinkin is one of the biggest credit unions in the country, with more than a million customers and 3.5 trillion yen in deposits.

But Yoshiwara says it’s a “grave mistake” for companies to think only of profit.

“We need to find a way to contribute to society, even if it means putting the entire company on the line,” he said.

“He had that kind of romanticism. Putting it all on the line in pursuit of ideals," he said. "That resonated with me.”

When Yoshiwara became chairman of the bank, he set a rule that the chairman’s salary can’t be higher than that of a branch manager. He says money doesn’t make people happy. It just makes them lonely.

And he says businesses should contribute to public good. He likes to quote economist Adam Smith, warning that companies shouldn’t be allowed to run free in pursuit of money.

When asked how a guy who runs a bank can say such a thing, he fishes out his iPhone and hunts up another quote, this time from Raymond Chandler, the writer who invented the tough guy detective Philip Marlowe, played by Humphrey Bogart in The Big Sleep.

In the passage Yoshiwara likes, a woman asks Marlowe how a hard man like him can be so gentle. Marlowe replies, “If I wasn’t hard, I wouldn’t be alive. If I couldn’t ever be gentle, I wouldn’t deserve to be alive.”

Yoshiwara says that’s how a business should be — tough enough to survive, but compassionate.

He thinks a bank like his has moral responsibilities. So he’s trying to encourage people to save their money at the same time as he’s trying to fight nuclear energy.

So anyone who walks into the credit union and shows that they’ve lowered their power bill can walk out with a free piggy bank.