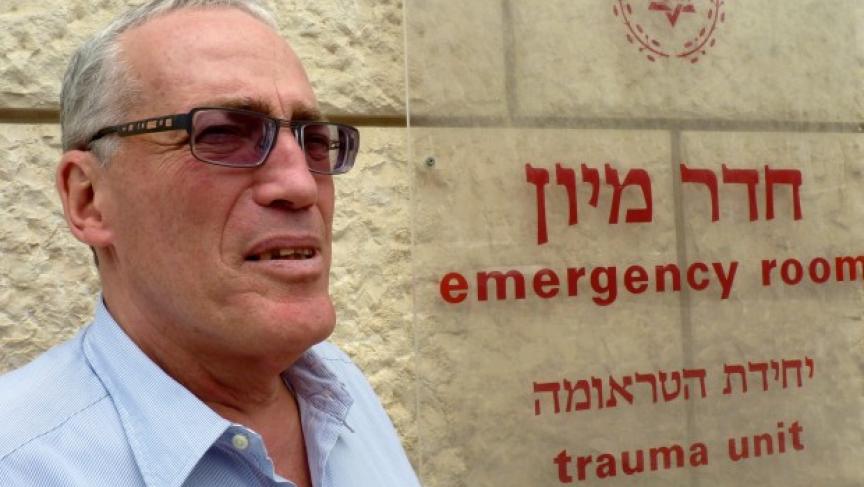 Dr. Avi Rivkind of Hadassah Medical Center in Jerusalem helped rewrite the book on treatment for victims of bombings. (Photo by Matthew Bell.)

When doctors and medical staff at Boston hospitals found themselves facing the horrific aftermath of the bombings on marathon day, many of them found that were rather well-prepared.

That’s thanks in part to some lessons shared by emergency medical personnel in Israel. ‘Terror medicine’ is something the Israelis have learned a lot about over the years.

Minutes after the bombs went off in downtown Boston, an announcement came over the loudspeakers at Massachusetts General Hospital. It told hospital staff to get ready for large numbers of casualties.

The emergency room was full of patients already. They had to be moved elsewhere to make space for incoming patients. Staff had planned for a mass casualty situations like this one.

But marathon day was the real thing.

“The most severe patients,” Alasdair Conn, chief of emergency medicine at Mass General, told reporters gathered outside the hospital on that afternoon, “they were suffering from traumatic amputations, if you like, their legs were blown off.”

At the time, there were unconfirmed reports of other explosions in Boston and even a possible chemical substance at one of the bomb sites. Nonetheless, Conn calmly explained that things were going according to plan at the hospital.

“We hope that there would be no further injuries, however, we are prepared if further explosions occur,” he said.

“We obviously have a limited experience of explosions in an urban area,” Conn said. “The Israelis unfortunately have this (kind of experience) and I’m very pleased that we went through that orientation and additional training.

Israeli physician Avi Rivkind is no stranger to terrorist bombings. Rivkind is the head of surgery at Hadassah Medical Center in Jerusalem, which has treated more than half of all Israeli victims of terror attacks.

On a tour of Hadassah’s emergency room, Rivkind opened a wide swinging door and pointed out the hallway that runs from the treatment area out to the parking lot where ambulances arrive. “A straight line from outside [to the] inside,” he said.

The lay-out is designed for mass casualty events, like a bus bombing or explosion inside a busy restaurant. Bulky electronic equipment, for example, hangs from the ceiling instead of the floor. That frees up space around the patient’s bed for doctors to work.

From a medical standpoint, Rivkind said treating trauma successfully is about unlearning what is taught in medical school.

“Because as a medical student, you have ‘what is your name, Mr. John? Since when you are sick?’ All these (procedures) take time,” Rivkind said.

When dealing with a large number of trauma victims in a situation like the Boston bombing, “you have to flip the disk,” Rivkind explained.

“It’s another type of medicine. That’s something that people should absorb,” he said.

Rivkind said casualties after a bomb blast often include two different types of injuries — penetrating and blunt. That means shrapnel wounds or even severed limbs can be combined with internal injuries that are extremely difficult to detect.

Rivkind said he has seen instances of blast victims arriving at the hospital, talking with staff, and then in a matter of minutes, “dropping dead.”

At the same time, Rivkind said he tells doctors to “never give up.”

“According to the text book, you should announce them dead,” he said of certain victims of severe blast trauma. But sometimes, these victims do survive, Rivkind said.

Rivkind helped come up with a training system for emergency triage known as, “look, touch, feel.” It’s all about thinking outside the box — and quickly — to diagnose and treat multiple victims of blast trauma.

Rivkind said some of the most important lessons learned in Israel are more practical than medical. At his hospital, for example, everyone expects the cell network to go down after a terror attack. So no one even bothers to try calling into work. They simply come to the hospital. Everyone from nursing assistants to senior physicians shows up and pitches in.

But for all his experience dealing with terror medicine, Rivkind is not quite sure of the best way to prepare emergency medical personnel for post-traumatic stress.

“It totally depends on the human that are dealing with it. Medically, you can ... give guidelines,” he said. “Psychologically, I don’t think so.”

Rivkind said one thing that does seem pretty clear though, is that terrorism is probably here to stay — from Boston to Baghdad, from Pakistan to London — and that means medical professionals everywhere need to be prepared.