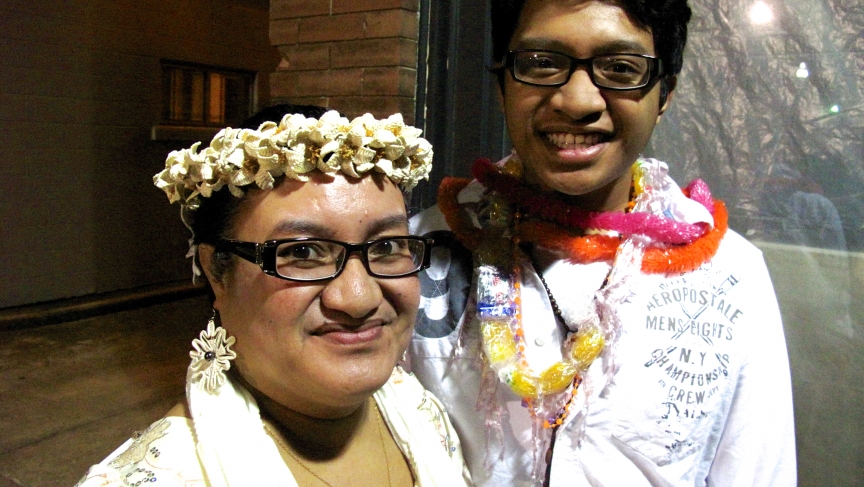 Hang around southwest Missouri long enough and you're bound to meet someone named Rehobson. The family name is common in Micronesia, and in parts of this state.

"I get a lot of that, 'Missouri?'" Micronesian migrant Lou Rehobson said. "We like it here."

Rehobson has lived the rural town of Goodman, Missouri, for the past 18 years. She is originally from the island of Pingelap, which is so small you can walk across it in an afternoon.

In 1995 Rehobson wanted to move up, get a better education and better provide for her family.

Rehobson said despite the white sand, blue ocean and palm trees, the country's weak economy means migrants lead better lives in the United States. Like many Micronesians here, in Rehobson's family one person came for school or work and then another followed, and another.

Rehobson's aunt and brother had already migrated to Missouri when she considered making the move. The family was attracted by the state's cheap cost of living, good education opportunities and ample jobs in factories.

Now tens of thousands of Micronesians call the US home. A good part of the migration is thanks to the Compact of Free Association, a treaty signed between the US, Micronesia and other Pacific Island states in 1986. It gave the US access to the area's vast strategic ocean territory. In exchange, Pacific Islanders were allowed to live and work in the US without a visa. One form called an I-94 is the most immigration paperwork Micronesians have to fill out.

Hawaii and Guam have long been popular spots to settle since the treaty. In the last five years, though, more migrants from Micronesia have headed to the mainland, according to a survey on migration patterns by researchers Francis Hezel and Michael Levin. Some 1,200 people migrate from the Federated States of Micronesia every year, researchers found. Communities of 4,000 to 5,000 Micronesia migrants are centered around Portland, Oregon, and Kansas City, Missouri, where the community lives scattered throughout the foothills of the Ozarks.

Recently, members of the First Micronesian Church of Christ assembled at dusk to celebrate Easter, filling the streets of Neosho, Missouri with hymns in the languages of their home country. Women wore long white dresses and headbands adorned with foam flowers and fake gems.

After pastors delivered sermons from the church steps, congregants lined up by a fire pit and threw in small sticks symbolizing sins, a yearly tradition. Events like this draw hundreds of people, many related to each other or from the same islands back home.

Worshiping in the crowd was Ekarihne Handy, a church elder. She once dreamed of returning to Micronesia. But now, with four kids, the family is rooted here, she said.

The Ozark Micronesian community has pulled through hard times. In 2007, a Micronesian man opened fire inside the church. He killed three people, including Lou Rehobson's brother and uncle. It was national news. Rehobson still has the sympathy cards that poured in from across the country. She keeps them in a binder three or four inches thick.

"I think (the shooting) brought everybody closer," Rehobson said.

The close community is a key ingredient to making Missouri home.

Rehobson remembers when she arrived in the US with her husband 18 years ago. Her family picked her up at the airport and brought her to a cookout, complete with barbequed chicken, steak, hotdogs and the signature Micronesia dish of pihlohlo made from grated tapioca, coconut milk, sugar, and ripe banana. "Wow, this is home," Rehobson remembers thinking to herself that day.

With what Missouri can offer these migrants—a cheap cost of living, entry-level jobs, and a close community—the question isn't why are Micronesians in landlocked Missouri. Rather, why would they ever leave?