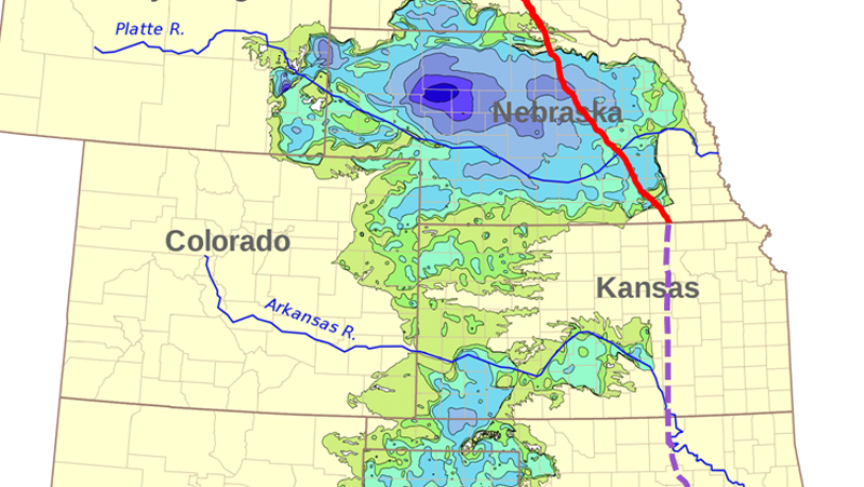 The proposed Keystone XL extensions (red) to the existing Keystone pipeline (purple) was denied. The Obama administration cited concerns about its impact on Nebraska's Sand Hills. It would run near the Ogallala aquifer, pictured.

Some say the proposed Keystone XL pipeline to bring tar sands crude from Canada would unleash climate disaster — others claim it would provide jobs and energy security.

The U.S. State Department has released a draft Environmental Impact Statement that favors the project. But now the Environmental Protection Agency is calling the analysis "insufficient," saying it downplays the pipeline's likely hazards.

UCLA law professor Ann Carlson says the EPA is challenging the State Department on a number of key points.

"One is the key objection and really, really important. And that is, in the draft Environmental Impact Statement, the State Department concluded that the greenhouse gas emissions impact of building the pipeline would not be significant," Carlson said. "The conclusion of the State Department is that if we don't build the pipeline, the oil’s going to get used anyway, and it will be either shipped by train or shipped through another pipeline, perhaps that goes to British Colombia and then is shipped to China. And so their conclusion is, no matter what we do, those emissions are going to be emitted."

The EPA questions that — citing research that suggests the higher costs of shipping by train, for example, could make the oil cost prohibitive to extract.

But the EPA has other objections as well. For one, they're worried about the risks of a spill, citing the particularly environmentally toxic nature of this kind of oil. Finally, the EPA raises concerns that the statement pays insufficient attention to an alternate route through Nebraska, that might avoid some of the most sensitive land in the pipeline's path.

It's far from certain, but this could have a major impact on the effort to get the Keystone XL pipeline off the ground.

"The leader of environmental issues in the Obama administration is now saying that the conclusion of the draft Environmental Impact Statement from the State Department is inadequate in the most important respect, and that is their conclusion that the pipeline would not have a significant effect on greenhouse gas emissions," Carlson said.

There's a practical impact, too. The State Department will need to revise its impact statement — or face a lawsuit that will be backed by comments from the EPA.

Still, Carlson doubts the EPA's objections will dramatically alter the timeline for approving or rejecting the Keystone XL pipeline.

"I suspect - although I don't know for certain - that the State Department already has some of this information at its fingertips," she said. "I think the much more important question is actually not on time; it’s on substance. What is the State Department going to do in response to these criticisms."

Ultimately, she says, the matter is less one of process and more one of politics. President Barack Obama spoke during the State of the Union about wanting to reduce greenhouse gas emissions; this, she says, is his chance to show he's serious.