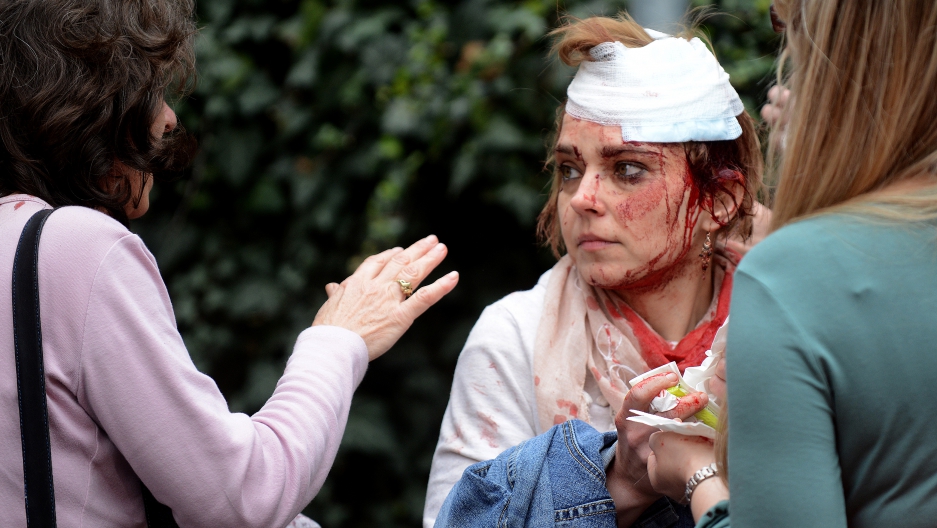 Injured people stand on the street near the site of a powerful gas blast in Prague's historic center on April 29, 2013. The blast injured up to 20 people, four seriously, rescuers said, adding that it was possible some people were buried in the rubble.
Credit: MICHAL CIZEK
Share

A powerful blast in central Prague has injured at least 40 people, with more buried in the rubble, authorities have told media outlets.

Reports are now saying at least 55 have been wounded in the explosion.

The blast, which occurred at around 9:56 a.m. local time in the Czech capital, was caused by a leaking gas pipe, a police officer working the scene told the Wall Street Journal.

Czech media quoted eyewitnesses who said they smelled gas in the street before the blast.

Prague's mayor, Bohuslav Svoboda, was quoted as saying from the scene that there were fears that "three or so" people might still be inside the structure.

"According to preliminary information, we believe that up to four people suffered from severe injuries in the wake of the blast and most other injuries, totaling around 40, are light ones largely caused by cuts from shattered glass," said Zdenek Schwarz, head of Prague Emergency Medical Services.

According to the Associated Press, the building is on a side street near the National Theater, the Prague FAMU film school and the popular Cafe Slavia on the east bank of the Vltava river.

Its views of Prague Castle, on the hill across the river, draws many tourists.

The blast was reportedly heard as far as away as the US Embassy on the other side of the river in Mala Strana, or the Lesser Quarter, beneath Prague Castle.

Buildings within a hundred yards had their windows shattered, including the glass front of the New Scene building of the National Theater, the AP added.

Bloomberg cited Schwarz as saying on local television that rescue workers had not been able to enter the building to search for survivors for fear of further gas leaks.

On Sunday in the French city of Reims, a section of a five-story residential building collapsed after a possible gas explosion, killing three people and injuring 14.

Here's a look at the aftermath via the AP: