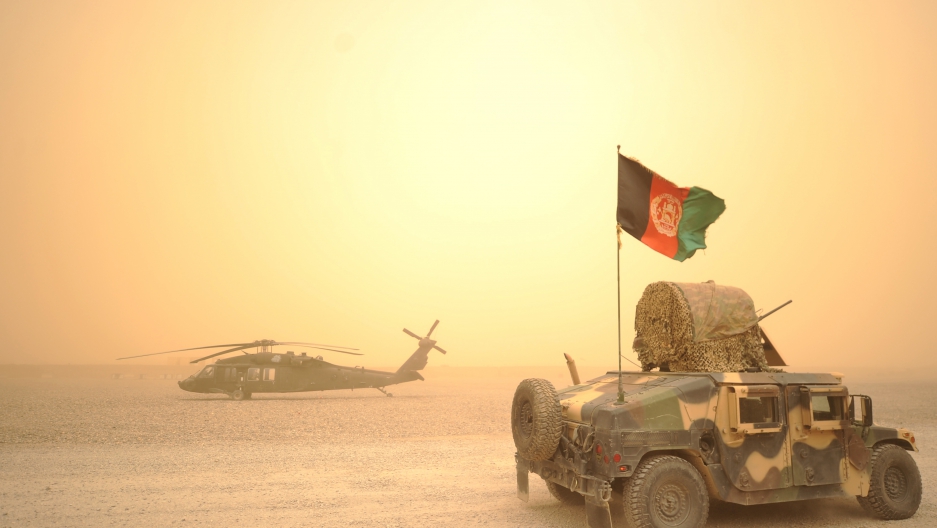 An Afghan National Army Humvee jeep drives past a U.S. army Black Hawk helicopter from Alpha Company 7-101 AVN during a sandstorm at FOB Wilson in Kandahar province in southern Afghanistan on March 27, 2011. Around 140,000 foreign troops are deployed in Afghanistan within the U.N.-mandated, NATO-led, International Security Assistance Force (ISAF) and the US-led coalition Operation Enduring Freedom, which overthrew the Taliban in late 2001.
Credit: Peter Parks
Share

Initial reports of the accident suggested it was not a result of military activity. The ISAF plane went down in Shah Joy district, and has been surrounded by international forces.

The brief statement about the crash from Mohammad Jan Rasoulyar, deputy governor of the southern province of Zabul, did not specify the nationalities of the victims in accordance with coalition policy.

Most international soldiers in southern Afghanistan are from the United States.

The Taliban have not claimed responsibility for the attack, though earlier Saturday the organization announced the start of their annual "spring offensive," vowing a nationwide series of attacks as NATO troops withdraw earlier.

This year's "fighting season" is seen as crucial to Afghanistan's future as its much-criticized security forces pit themselves against the Islamist extremists who have fought against the Kabul government since 2001.

“The Afghan National Army is ready to neutralize the offensive,” Afghanistan's Defense Ministry responded in a statement, the Associated Press reported.

These casualties bring the number of ISAF member deaths in 2013 up to 18, according to the force's casualty reports.

NATO forces are slated to pull out of Afghanistan next year.