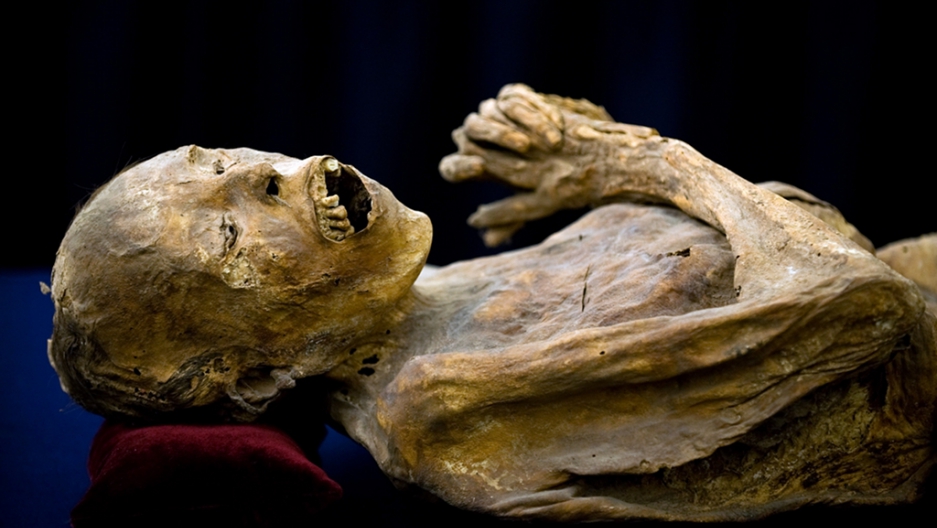 One of Mexico's famous mummies, remnants of victims of a 19th century cholera outbreak, on display in Guanajuato.
Credit: Luis Acosta
Share

MEXICO CITY — Mexico's migrating mummies have made it home at last.

After a hapless and perhaps unprofitable four-year sojourn in the United States, the desiccated corpses of 36 humans have returned to Guanajuato, the central highlands city where their hearts last beat.

Eternal rest? Not a chance for these wraith-less remains. They're going on public display and will rejoin more than three score others in the municipal Mummy Museum, drawing many thousands of tourists and pouring millions of pesos into the public coffers.

Something there is that loves a breathless being. That's no truer anywhere than in Mexico, where the Day of the Dead is a hallowed holiday, Holy Death a sanctified specter, fancy-dressed skeletons a favored folk art.

“We are seduced by death,” the late Mexican poet Octavio Paz wrote five decades ago in “The Labyrinth of Solitude,” an essential portrait of his people. “Death revenges us against life, strips it of all its vanities and pretensions and converts it into what it really is: a few neat bones and a dreadful grimace.”

Guanajuato's mummies are not the well-wrapped royalty of Egyptian repute, either. These bodies belonged to common folk and, in death, were cured naturally by the local soil's unique properties, lending them the value of rarity perhaps denied them in life.

The oldest were buried a century and a half ago amid a cholera epidemic, the newest not a generation past.

As in much of Mexico, many graves in Guanajuato are contracted temporarily, their contents then unceremoniously turned out to make way for the freshly departed.

The mummies here are now roadside attractions simply because loved ones were unwilling or unable to pay for the perpetual repose of the deceased.

The first mummies were put on display in the middle of the 19th century by cemetery workers, who were tipped a few pesos for the service. The museum that holds them now serves as a primary draw to Guanajuato — a charming if somewhat eerie colonial mining center that’s capital of the state of the same name.

The 36 mummies' odyssey began when Guanajuato's then-mayor leased them out to a Mexican businessman who promised to pay some $240,000 a year for the right to take them touring the United States. The show opened in Detroit, played Dallas and Greensboro, North Carolina, and then apparently hit hard times.

At any rate, the remains' rent was never paid, city officials say. They claimed the mummies had been kidnapped and filed lawsuits to recover the bodies, which finally returned early this week.

Crowds turned out for the homecoming this week, people snapping pictures and craning necks as the mummies were carried reverently into a building where they'll be displayed free of charge for the next month.

"We feel proud and tranquil having all our mummies complete," Mayor Luis Fernando Gutierrez told reporters at the ceremony marking the moment, a banner behind him announcing, "Welcome, Mummy Travelers. "