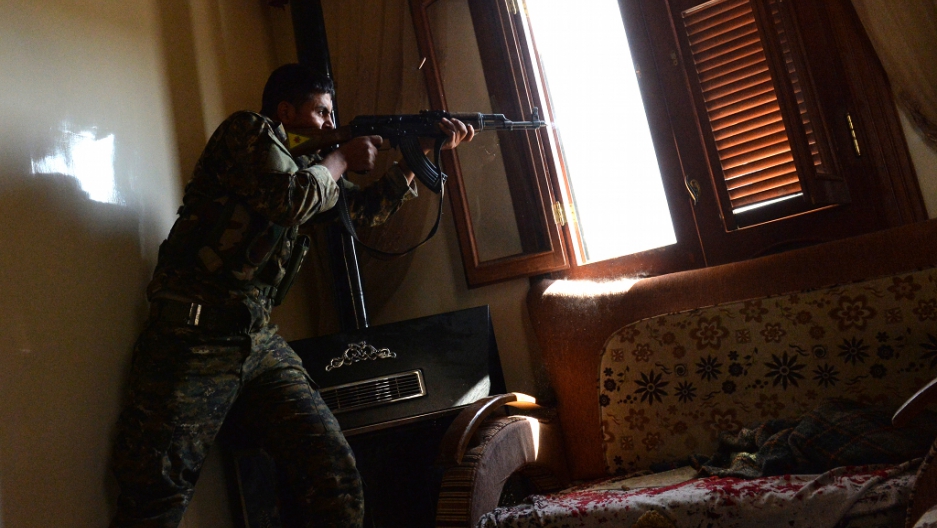 A Kurdish fighter from the Popular Protection Unit (YPG) fires towards Syrian government forces inside a building in the majority-Kurdish Sheikh Maqsud district of the northern Syrian city of Aleppo, on April 21, 2013.
Credit: Miguel Medina
Share

Several people were killed in the initial fighting, including an 8-year-old boy. Heavy gunfire and mortar attacks continued into the night.

Ethnic Kurds account for 11 percent of the Syrian population, about the same percentage as the Alawite minority that dominates the government of President Bashar al-Assad. Under Assad, the Kurds have been largely oppressed and, until April 2011, were denied status as Syrian citizens. Their cultural celebrations, literature and traditions were all banned, and the Kurdish language forbidden in schools.

Despite such repression, Kurdish leaders have long refrained from taking a side in a Syrian civil war. Instead, taking advantage of the power vacuum left as the rebels and government fight it out, the Kurds moved to take control of large parts of the Syrian Kurdish region. A distracted government offered little resistance.

More from GlobalPost: Full coverage from Inside Syria

In Syria, the Kurds have periodically clashed with both Free Syrian Army and regime troops, mostly to defend areas they control. Some say a united front between the rebels and the Kurds could turn the tide of the revolution against Assad. Others accuse Kurdish parties of making secret side deals with the regime.

This kind of suspicion is what sparked Friday’s clashes in Aleppo. Several weeks ago, the main Kurdish militia in Syria — known as the Popular Protection Unit, or YPG — granted the Free Syrian Army permission to enter the Kurdish-controlled neighborhoods of Ashrefeya and Sheikh Maqsoud to attack government positions.

But this week rebels accused Kurdish forces of working behind the scenes with the government. They blamed them for trying to execute two Kurds working with the Free Syrian Army, and for attacking a rebel convoy.

“The YPG have been on the government side from the beginning,” said Khalid Alhayani, a Free Syrian Army brigade commander. “When we entered [the area], we asked YPG if we could use their territory to hit government check points. They would agree but then report to the government our plans.”

He claimed the Kurds have launched secret campaigns to arrested rebels and hand them over to the government. He said he suspects they have plans to trap the rebels between their forces and the regime.

A Kurdish commander in Aleppo, however, said the Kurds were attempting to remain neutral, siding with neither the rebels nor the government forces and only holding defensive positions in areas they control.

“We cannot side with the dictatorship of the regime or the extremist views of the opposition groups,” the Kurdish commander said. “Instead we hold a third line — a democratic line. We do not side with either of them.”

One of the Kurdish men working with the Free Syrian Army, who managed to survive an assassination attempt, said he was attacked after telling the rebels about two government officials living nearby.

“We were sitting outside in front of the door and this guy from the YPG came and asked us why are we working for the FSA,” said Sheikhho Mannan, 19, his head still bandaged. “He asked us to give him information about FSA plans and spy on them, but we said no. They came inside and asked if we had any weapons. We had a handgun so we gave it to him. He took the gun and started shooting us. They shot me in the head and I pretended to be dead.”

Mannan said he managed to escape out a window before running to a Free Syrian Army checkpoint.

Khalid Alhayani, a Free Syrian Army commander, said several Kurdish civilians were quickly arrested in connection with the attack. The next morning Kurdish militiamen opened fire on a rebel vehicle. And then, on Friday, the widespread clashes erupted.