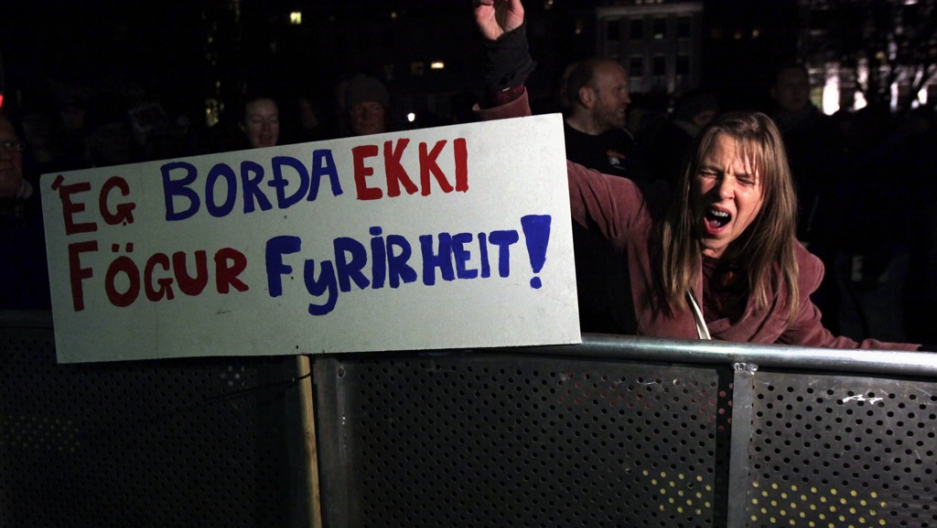 People demonstrate outside the Icelandic parliament, Althingi, when parliament reconvened for the fall session on Oct. 3, 2011. An Icelandic court said it would hear a case against former prime minister Geir Haarde over his role in the 2008 collapse of the banking sector which brought the Nordic country to its knees.
Credit: HALLDOR KOLBEINS
Share

BRUSSELS, Belgium — For a country as dependent on fishing as Iceland, the image is harsh but apt. “Memories like goldfish," says political analyst Silla Sigurgeirsdottir as she tries to explain why some Icelanders might on Saturday vote for the parties blamed for the 2008 banking collapse.

Hordur Torfason, a popular Icelandic folk singer, is more forthright: “I don't believe that people are so stupid as to vote for these parties.”

The polls, however, paint a different picture. Parliamentary elections this weekend are forecast to deliver a stinging rejection of the center-left coalition led by Johanna Sigurdardottir, in another sign that Europe's voters are tiring of the financial hardships governments demand of them as they try to get the economies back on track.

Icelanders are instead expected to flock back to two center-right parties — the Progressive Party and the Independence Party — whose policies of financial deregulation were blamed for the collapse of the three largest banks, a default on $85 billion of debt, and the nation's worst recession in decades.

“People are struggling, and this group of people — mainly middle class — think that this government has not done enough for them,” says Sigurgeirsdottir, a political science lecturer at the University of Iceland.

For four years, economists and activists have praised Iceland as the poster child for how to haul yourself back from the brink of bankruptcy and onto the path to economic recovery. The International Monetary Fund, which lent Iceland $2.1 billion, nodded approvingly as Reykjavik acted swiftly, allowing the banks to fail, devaluing its currency and imposing strict capital controls.

Social activists applauded the thousands of protesters who — disgusted at the economic mismanagement that led to the banks’ collapse — successfully took to the streets and ousted the government. Bankers went to jail, the former premier was put on trial, and Iceland soon reported growth in a continent mired in recession and unemployment.

Compared with the euro zone, where economies are expected to contract by 0.3 percent this year, Iceland's economy is predicted to grow 1.9 percent.

Unemployment among its 320,000 population hovers at just under 5 percent, while in nations such as Greece and Spain, one in four people is jobless.

“In 2009, it looked as if we were bankrupt and we pictured ourselves standing in the line for the next years waiting for a bowl of soup,” said Torfason, who led the protests in 2008 and 2009. “Looking at the situation today, it's much much better than we expected.”

But behind the positive figures and glowing reviews, ordinary Icelanders are struggling. Many unemployed young people simply left the country to find work overseas. Inflation caused by the devaluation of the currency saddled households with ballooning debt, and — like in Italy earlier this year — mainstream opposition parties and the smaller protest parties have leapt in to capitalize on this growing discontent.

That the particular opposition party now campaigning as the champion of ordinary families is the party whose policies helped the nation accumulate its crippling debt is an irony not lost on Sigurgeirsdottir.

“People tend to forget [that] it was the Progressive Party who offered in the 2003 campaign to raise the mortgage level up to 90 percent of the market price, and the households now struggling are struggling because of that policy,” she says. “And now they [the Progressive Party] say they are going to lift your burden.”

The Progressive Party leader, Sigmundur David Gunnlaugsson, has said he will force foreign creditors to take a haircut on some of their frozen investments and use the money to fund a cut in people's mortgages. Understandably, this policy strikes a chord with voters, even if economists warn that it could backfire and scare off further foreign investment.

Analysts say the capital controls measures will be a key issue for any new government. Businesses complain that the stringent restrictions are preventing investment, but lifting them could spark a sudden outflow of capital, causing the krona to devalue further.

The Independence Party has vowed to lift the controls and lower taxes. Its leader, Bjarni Benediktsson, told the Financial Times the controls “are like a banner over Iceland saying that the people don’t believe in their currency.”

Sigurdardottir, Iceland’s first female leader and the first openly gay prime minister in Europe, is popular and widely respected, but she announced last year that she would not run for re-election.

Her Social Democratic party is widely seen to have misread the public mood and campaigned on joining the European Union.

The emergence of smaller protest parties, like the ones that transformed Italy's political landscape earlier this year, has also split the vote on the left, where many people are disappointed that the government did not push through constitutional reform.

Polls suggest support for the Social Democrats may drop to as low as 14 percent. The Progressive Party is projected to get up to 30 percent of the vote, and the Independence Party a little less. That raises the likelihood of exactly the same Progressive-Independence coalition that ruled Iceland in the boom years from 1995 to 2007, which eventually led to the catastrophic bust.

That is almost unthinkable to the activists like Torfason. “Sometimes humans have to walk into the wall and break our nose before we understand what we are doing,” he says. “I'm just hoping it will not happen, but if it does happen, I think I will have to move away.”