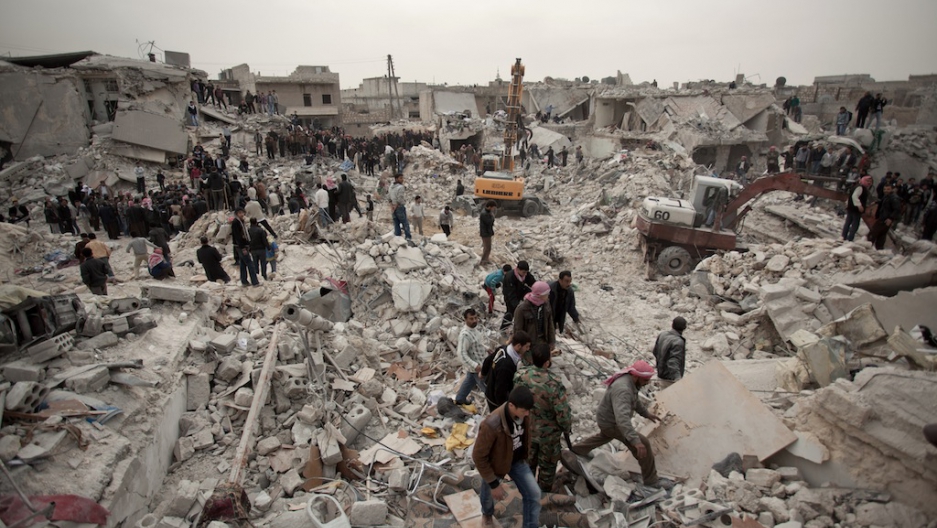 Syrians search for survivors and bodies amid the rubble of buildings in the Tariq al-Bab district of the northern city of Aleppo on Feb. 23, 2013.
Credit: Pablo Tosco
Share

As evidence of possible chemical weapons use in Syria mounts, so do the calls for a full-scale military intervention in the more than two-year-long conflict that has cost more than 1000,000 lives.

President Barack Obama had said chemical attacks by regime forces on Syrian civilians would constitute a “red line” for his administration in its willingness to intervene against the government of Syrian President Bashar al-Assad.

The US military is already assisting Syrian rebels through neighboring countries, including sending “non-lethal” assistance (like food, medicine and body armor) but also training opposition fighters in places like Jordan. Defense Secretary Chuck Hagel said earlier this year that the US contingent in Jordan could be a vanguard for a much more substantial troop deployment.

So what would a direct intervention by the United States or US-led international troops in Syria actually look like? The Pentagon has released few details of its ongoing contingency planning, including troop numbers and possible units. But here are a few scenarios:

SAFE ZONE: A border area inside Syrian territory where civilians could ostensibly seek refuge, the opposition could more easily organize, and humanitarian corridors would be established to facilitate the provision of aid. It would shy away from the goal of “regime change” while protecting a part of the civilian population. Safe zones, however, need to be both established and maintained by force, including either ground troops or air power and significant resources. Patriot missile batteries on the Turkish border could engage Syrian aircraft as far as 60 miles inside Syrian territory. But any ground deployment could put US or other international troops into direct, armed confrontation with government forces. And buffer zones would mean carving out some of Syria’s sovereign territory, with the potential to fracture the state.

AIR CAMPAIGN: The widespread bombing of both the Syrian government’s air defense and missile capabilities, crippling its ability to carry-out air strikes as well as shoot-down US or international aircraft. This could pave the way for a country-wide no-fly zone that would shield civilians from air bombardments, but that would also put civilians in the areas of air defense installations at risk. The regime’s air combat capabilities have in fact been damaged as rebels seize airfields and destroy missiles and helicopter gunships. However, military analysts say such an operation would be unlikely to end the conflict, and would still leave Assad with deadly ground capabilities, including artillery and paramilitary groups known for human rights violations and, in some cases, massacres.

CHEMICAL WEAPONS: A purely military operation that would see the deployment of a sizeable contingent of US troops or special forces to track, secure, and possibly remove Syria’s chemical weapons stocks in the event of regime collapse. Some analysts say the task could require up to 10,000 troops. And Army General Martin E. Dempsey, chairman of the Joint Chiefs of Staff, says he is not sure US military forces would be capable of securing all of the weapons depots. Syria is said to have one of the largest stockpiles of chemical weapons in the world.

NAVAL BLOCKADE: The maritime monitoring and seizure of weaponry and munitions arriving at Syrian ports and for Syrian government forces. Without a United Nations mandate or international consensus, such a move would be legally dubious. In addition, it would include US or international attempts to halt or search Russian ships. Russia is one of the leading suppliers of weaponry to the Assad regime.

All the options carry serious risks. US military officials have conceded that any of the above choices are unlikely to end the bloodshed. In fact, some run the risk of exacerbating the conflict, ushering in a period of chaos, lawlessness, and perhaps even more sectarian violence that could see thousands more killed.

More from GlobalPost: How Syria's conflict stretches beyond its borders

If the United States engages in the Syrian conflict — whether by establishing safe zones, bombing air defense installations, or securing chemical weapons — it is likely it will become further embroiled not only in the Syrian crisis but also in a long-term, regional proxy war.

Will the United States then be responsible for reorganizing and rebuilding Syria’s political institutions and infrastructure? With the military disaster in Iraq still fresh in the minds of Washington policymakers, that seems unlikely.

“I think there is rightfully some hesitation injecting the US directly into something as complex and as intractable as the Syrian conflict,” Michael Hanna, a fellow at the New York-based Century Foundation, told GlobalPost last fall.

But it could be unavoidable.