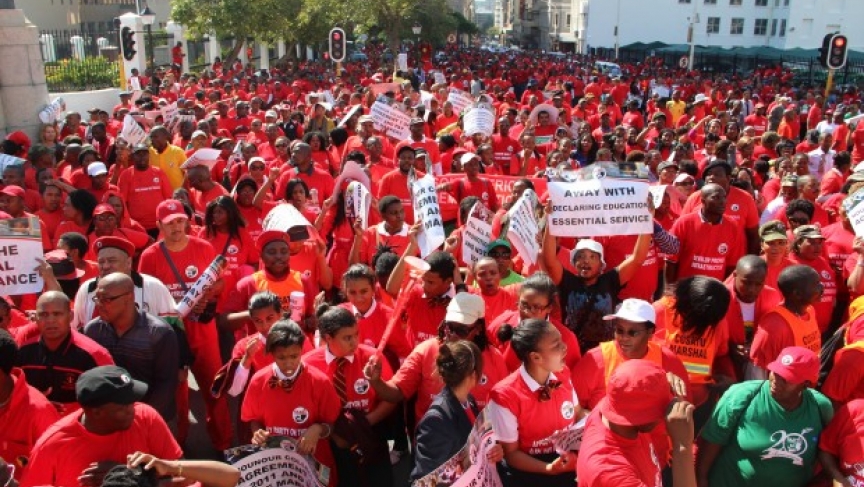 Yesterday, dozens of schools near Cape Town closed early, as the country’s largest teachers union went on a one-day strike. According to the union, more than 2,000 teachers sacrificed a day’s pay to participate in a protest march, and to call for the resignation of the Minister of Education.

The union’s list of demands is long, but, essentially, it’s calling for improved school infrastructure, higher pay, and equality in education. Disparities between rich and poor schools are extreme, and many schools lack bathrooms, libraries, desks, and, in some cases, walls and roofs. Shortcomings have persisted for years, despite the fact that South Africa spends a sizable portion of its budget on education.

At COSAT, this planned, one-day strike created a dilemma. Should the school close? Should it stay open, but shorten the day? Should it do nothing?

“We’ve had reports that the teachers union might march on COSAT,” Phadiela Cooper, the principal, said at a staff meeting.

This caused concern among the staff.

In 2010, a mob of angry teachers marched to COSAT when the school refused to shut down during a national teachers strike. They broke down a metal gate, barged into classrooms, and demanded that COSAT classes be dismissed. They snatched exam papers from students’ hands, and tore them into pieces. Some even threatened to vandalize COSAT teachers’ cars if they didn’t end classes or join their strike.

“It was strange, because some of those teachers were our friends and colleagues,” one COSAT teacher told me.

The teachers debated how to handle the current situation.

“Personally, I’m not scared of the unions. I’m not willing to live in fear of them,” one teacher said. She voted to teach according to the usual schedule.

“Given what’s happened in the past, I think it’s best that we just play it safe,” another teacher said.

Eventually, the staff decided to keep the school open, but to end at 3 p.m. – rather than the usual closing time of 4:15 p.m. This meant teachers would comply with a union demand that teachers – unionized or not – work no more than seven hours a day.

Mrs. Cooper, the principal of COSAT, said she felt torn over what to do. She’s a union member, and supports their demands and the current strike.

So, yesterday, classes and after-school activities were shortened. Fortunately, things went off without a hitch. And no angry mobs showed up to break down the gate.