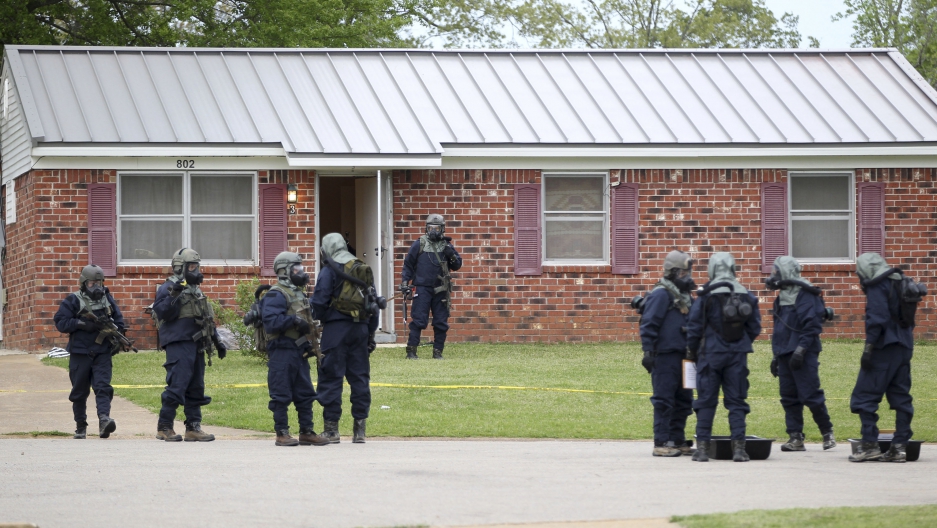 Federal officials stand outside the house of Paul Kevin Curtis while searching for evidence in Corinth, Miss., on April 18, 2013. Curtis is no longer a person of interest in the case. (Photo by Lauren Wood/Daily Journal via Reuters.)

Police have a new “person of interest” in their investigation of a series of ricin-laced letters sent to President Barack Obama, Mississippi's U.S. Senator Roger Wicker and a county judge in Mississippi.

Authorities earlier this week abruptly dropped charges against Paul Kevin Curtis, who had been described as the primary suspect in the case.

Federal authorities offered no explanation as to why they released Curtis, a 45-year-old celebrity impersonator.

The FBI is now questioning and searching the home of James Everett Dutschke, a long-time rival of Curtis's, who Curtis says may have framed him.

Dutschke said he's met Curtis twice, and had a string of email correspondence as well.

"I was very upset with him for posting a fake MENSA certificate. He is not a MENSA member, the certificate that he posted is a lie," Dutschke said.

Lenny Bernstein, an editor on The Washington Post’s national desk, said the FBI is reviewing a great deal of evidence seized from Dutschke's home recently.

"Dutschke stood out front of his home yesterday, for many hours, saying 'I know nothing about these ricin letters. They're not going to find anything in my home. And my name has been brought into this solely by Mr. Curtis's attorney ... in order to create reasonable doubt and to get the charges dropped against her fellow,'" Bernstein said.

For their part, though, authorities have said Curtis is no longer a person of interest in this case at all.

Both men have a history of run ins with law enforcement — Curtis for cyber-harassment and Dutschke for child molestation and indecent exposure. Their disagreement apparently runs back several years.

"These fellow have been engaged in a very strange feud, that involves such things as emails back and forth, calling each other names, at one point Dutschke was threatening to sue Curtis over what he called a false declaration on Curtis' Facebook page," Bernstein said. "There's a very strange and bizzarre feud going on and the FBI is caught in the middle."

Finding those responsible for sending deadly substances through the mail is no easy task. And while the feud between Dutschke and Curtis makes him a likely suspect — given the letter contained catch-phrases Curtis had posted all over the Internet, it could be a third person as yet unknown to authorities.

"If you remember back to 2001-2002, (the FBI) went after Steven Hatfill, a scientist here outside of Washington, for five or six years before it became clear, when they developed a new suspect, that Hatfill had nothing to do with the anthrax mailings that actually killed some people back in 2001," Bernstein said.