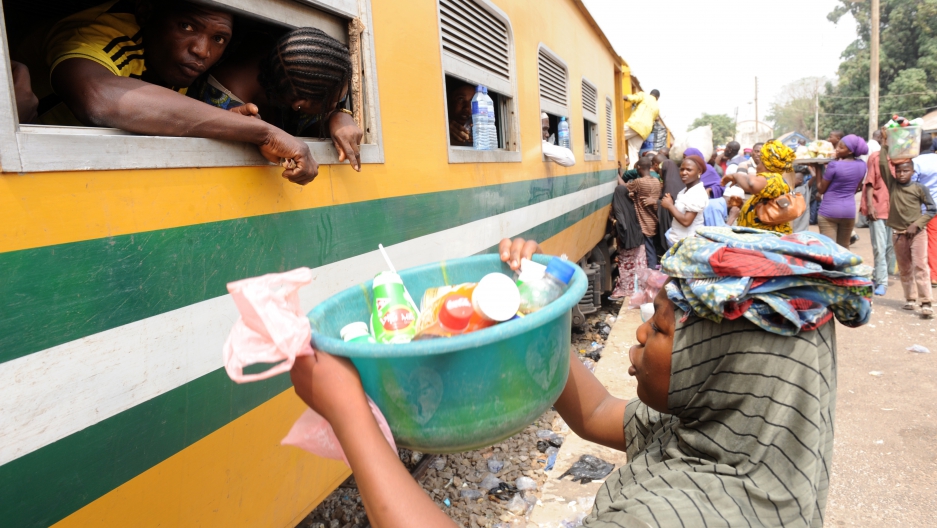 LAGOS-KANO RAILWAY, Nigeria — Despite the 90-degree tropical heat and the ample cabin space inside as the train departs, young men cling to the train’s open doorways as it exits the southern city of Lagos, rumbling through ramshackle suburban villages.

They are riding the newly revived Lagos-Kano railway, a 700-mile track opened at the end of last year that aims to breathe new life into a national economy long stymied by corruption and violent insurgency.

Some also hope the railway, which links the bitterly divided north and south by connecting the country’s two regional hubs, will act as a new symbol of unity.

“It will bring togetherness to the people of Nigeria, both from the north and from the south,” says 35-year-old passenger Ernst Asemota.

Perhaps even more importantly — for many Nigerians — the new train line could provide some immediate relief to a deeply troubled economy.

While most of Nigeria’s national budget is from oil revenue, the country is still forced to import the majority of its fuel. The cost of transporting that fuel from Nigeria’s ports is a major drain on the economy.

Local business leaders say other local industries — like cement, textiles and food production — are also stagnated by the lack of affordable, safe transportation.

Ill-kept roads connecting the two regions have long prevented goods from arriving on time, or at all. Supplies arriving in Nigeria’s southern ports often never make it to the north. And the food grown in the north often ends up rotting in the fields because the cost of the fuel to drive it to markets is often more than their value.

As the official line goes, however, the new train connecting Lagos and Kano is the solution to many of these problems.

Terence P. McCulley, the US ambassador to Nigeria, said the strategy has worked in other parts of the world, where cross-country railways have connected regional economies, making the national economies stronger as a whole.

“Those kind of links, as we’ve seen in our own country with the continental railroad in the 19th century, really succeeded in knitting the economies of our continent/nation together,” he said. “So I think it’s a great thing.”

Nigerian officials say the most exciting economic consequence of the railway is its potential to help some of the revenue from Nigeria’s vast resources impact regular people. The train is already carrying goods like cement, steel and vehicles that help local businesses. The trains also carry cash crops from the north, like wheat, which officials hope can alleviate some of the crushing poverty in the north.

The Lagos-Kano railway is also expected to carry more than a quarter of a million people a year, allowing them to save money on transportation for personal reasons and move more easily for work.

“It’s very safe, convenient. It carries more goods and passengers than any other mode, at least within Nigeria,” David Ndanusa Ndakotsu, a spokesman for the Nigerian Railway Corporation, told GlobalPost.

The only hiccup — and it’s a big one — might be the country’s rampant insecurity.

The two cities the train connects could not be more different. Lagos, the former capital, is in the heart of Nigeria’s mostly Christian south. Kano is deep in the mostly Muslim north. The two regions have long competed for political power and sectarian violence has killed about 14,000 people since 1999. The rise of the Boko Haram militant group has only made things worse.

During the train journey, the dangers loom. As the train chugged toward Kano on a recent April night, some of the train’s security guards, plain-clothed policemen carrying AK-47s, stepped off the train in Kaduna, about 125 miles from Kano, or six hours by train. The chief station master, who had also been aboard since Lagos, also hopped off, suggesting to foreigners that for the rest of the journey they “remain in hibernation,” meaning avoid wandering the platforms or cabins.

Fourteen foreign nationals have been kidnapped in northern Nigeria this year alone. Travelers from Great Britain, Italy and Greece have all been killed. A French family of seven kidnapped by militants was released last week.

Boko Haram, which has been waging an insurgency against the government since 2009, says it fights for a harsh interpretation of Islamic law and the release of its own imprisoned members. A splinter group, known as Ansaru, has taken a more global stance, demanding foreign armies vacate Mali.

“Every station you need to look [out]. You need to check [luggage],” said Benjamin Aletofa, a train security officer with the “Man O’ War” Association, a national volunteer corps that assists the police and military with civil security. “I don’t sleep.”

For passengers, while dangers are ever present, the train beats other options. On her first trip on the Lagos-Kano railway in 14 years, Aisha Muhammad Shuaib said she would never again take a night bus.

The trains appear to be old models, refurbished for modern use, and Shuaib said the main difference between today’s cars and those she rode 14 years ago is the working air conditioners, fans and lights, which are only available in first class.

The China Civil Engineering Construction Company — which is also now building a light-rail in Lagos state and another line connecting Abuja, the capital, to the northern city of Kaduna — built nearly half of the tracks on the Lagos-Kano line. Like in many parts of Africa, Chinese investors are leading the way in development in Nigeria, made apparent by the train’s bathroom signs, written in both English and Chinese. The Chinese employed thousands of Nigerians in the process.

In addition to its convenience, Nigerians are also flocking to the train because the Nigerian government heavily subsidizes its tickets. The journey is supposed to take 31 hours, as opposed to about 16 by car. But the cheapest seat only costs about $12. A bus the same distance costs about $30. It’s a decent deal for Nigerians, 90 percent of whom make less than $2 a day.

In the cheap seats, of course, the ride is anything but easy. On a recent journey, the train fell short of its promised average speed of between 28-31 mph, instead reaching Kano six and a half hours late.

By then, in the economy cabins, there was little room to rest and even the toilets were stacked with suitcases. The night before, only 12 hours into the journey, coach-class passengers tried to block new people from coming on board. The seats were full, and the floor space was gone.

The next morning, some passengers stood in the aisles while others crouched on the backrests of seats. Anyone who could manage stood outdoors between the cars, just for a breath of fresh air.

“The train is very congested,” said college student Hassan Abulaziz, wiping the sweat off his neck with his shirt. “Any stations we stop at, they are still taking passengers. There is no AC — nothing.”

The railway itself is old and strained. The bulk of Nigeria’s train network — built in the early 20th Century by British colonials, is still not operating and at many of the trip’s 18 stops from Lagos to Kano, decaying train cars rust away on the old tracks.

Ndakotsu, the train official, said things will get better in time. He said the government plans to resurrect the entire colonial train structure and reduce the Lagos-Kano trip to 24 hours.

“Ultimately the idea of the modernization stage is to extend the railways to all state capitals,” Ndakotsu said. “Then, all the major sea ports and airports will be connected by rail.”