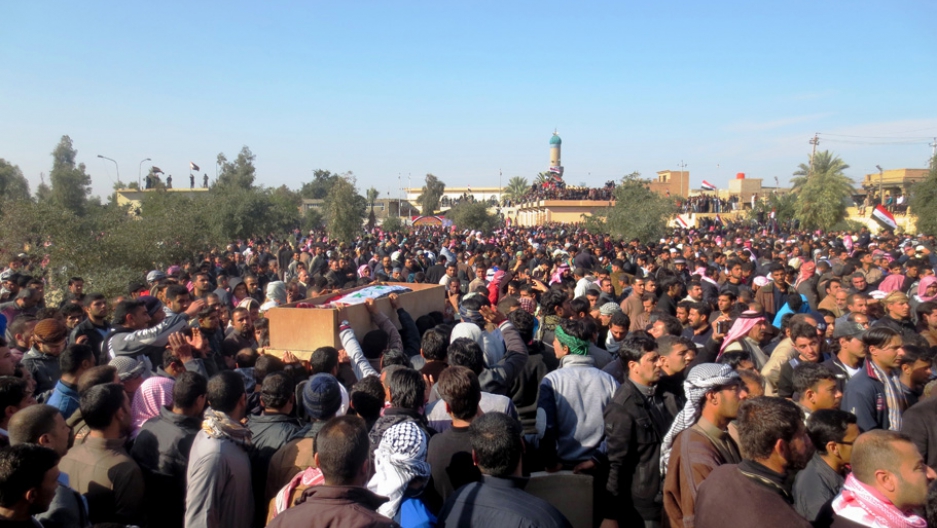 Iraqis gather during the funeral of one of six people killed by Iraqi troops the day before during a protest in the town of Fallujah, west of the Iraqi capital Baghdad on January 26, 2013. The deaths in the predominantly Sunni town were the first since protests began last month, and came as tens of thousands rallied in Sunni areas of the country, railing against alleged targeting of their minority by the Shiite-led authorities. AFP PHOTO/AZHAR SHALLAL (Photo credit should read AZHAR SHALLAL/AFP/Getty Images)
Credit: AZHAR SHALLAL
Share

Iraq's Prime Minister Nuri Kamal al-Maliki on Thursday warned against growing sectarian violence and urged for calm in the face of rising protests against his leadership, reported The New York Times.

His remarks come as Iraqi police said Thursday that over 40 people have died in clashes in the northern city of Mosul, reported the Associated Press, the latest flare-up in sectarian violence.

Reports of clashes between Sunni militants and the country's Shiite-led government in various cities have left many people dead in Iraq over the past several days, upheaval that is clearly being felt in Baghdad.

A deadly government raid on a Sunni encampment in Hawija on Tuesday prompted resignation of two Sunni parliamentarians, said The New York Times.

Maliki addressed the Hawija incident as well as Wednesday's violence in the northern city of Sulaiman Bek in Thursday's speech, saying:

“What happened in Hawija, and what is happening today in Sulaiman Bek and other places, is a point in which we should stop and think because it might lead to sectarian strife. Everyone would lose. Whether he is in the north, the south, east or west of Iraq, if the fire of sectarianism starts, everyone’s fingers will be burned by it.”

His comments were directed in particular at Iraq's majority Sunnis, who have been holding large demonstrations against his administration over alleged discrimination.

In Mosul, a local police official told AP on Thursday 31 insurgents and 10 officers had been killed there since the day before. Reuters, citing military sources, said 15 officers were killed and identified the 31 dead insurgents as "Sunni Islamist militants," adding that Iraq's recent sectarian violence is at its worst level since US forces withdrew in December 2011.

More from GlobalPost: At least 15 killed in Iraqi town of Sulaiman Bek

Clashes between government forces and militants in Sulaiman Bek on Wednesday killed scores, with the government resorting to armed helicopters in a bid to stamp out the violence.