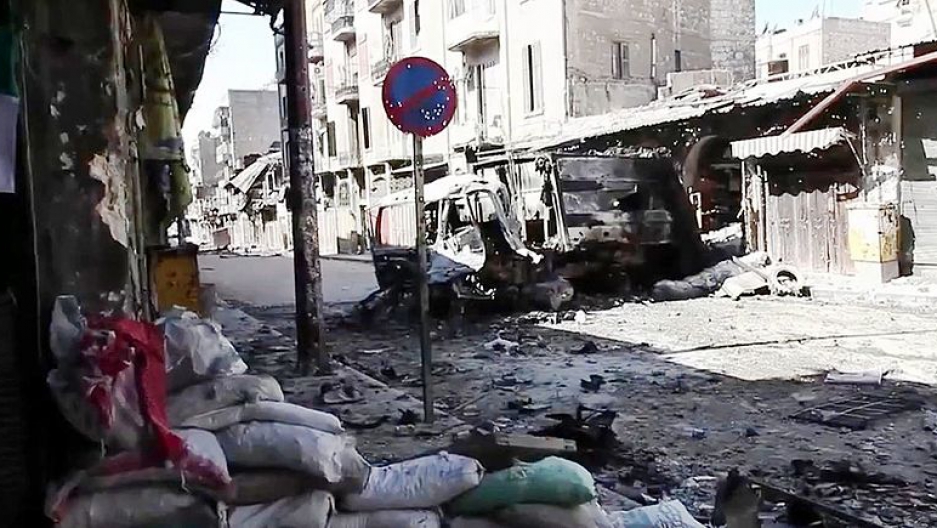 Bombed out vehicles litter the street of Aleppo, Syria, in October, 2012. (Photo by Scott Bobb/Voice of America News.)

There are now three nations who say they have evidence of the use of chemical weapons by the Assad regime in Syria.

According to President Barack Obama, the use of chemical weapons is his "red line" when it comes to the conflict in Syria. On Thursday, U.S. Defense Secretary Chuck Hagel told reporters during a Middle East trip that, within the past 24 hours, U.S. intelligence officials had concluded Syria had used chemical weapons — specifically sarin gas.

Gary Samore, President Obama's former coordinator for weapons of mass destruction, counter-terrorism and arms control, cautioned that the stakes are very high for the Obama administration because of Obama's public red line warning.

"But if you look at the kind of options that are available to the United States to respond to chemical weapons use — especially, very small-scale use, battlefield use — they're not very attractive," he said.

Samore, who is currently the executive director at Harvard University's Belfer Center, said the administration was wise to be taking its time to chart the correct path and examine the evidence.

But physical evidence, especially samples from victims, will eventually force the issue.

"But at this point, based on what's publicly available, it's hard to say the evidence is conclusive," Samore said.

Recent U.S. history, of going to war in Iraq to recover weapons of mass destruction where there were none, certainly complicates matters — though Obama administration officials insist their response isn't influenced by that history at all.

So far, chemical weapons use has been fairly limited, according to the nations who say they have evidence proving its use. But Samore says wide-scale use could be coming, as the civil war continues and the Assad government continues to be marginalized.

"Then, I think, there will be tremendous pressure on the United States and other countries to take action," he said. "These are very difficult military operations because the Syrian chemical weapons program is so extensive. And it's hard to think of a military scenario that would be effective without requiring a very large military intervention."