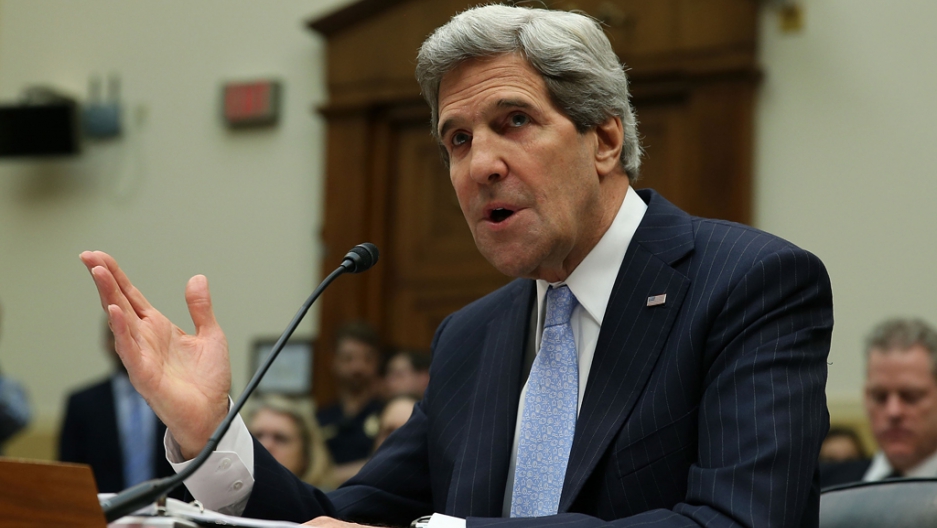 Stale, cool air pushed through 2172, the Foreign Affairs Committee room in the Rayburn building of the House of Representatives. Suited congressional leaders trickled into the cavernous room from separate doors on either side of the elevated dais, Republicans on the left and Democrats on the right, and ambled to their assigned, ranked seats. Dozens of attendees sat hushed in the back, waiting for the latest hearing to begin.

Titled “Securing US Interests Abroad: The FY 2014 Foreign Affairs Budget,” the April 17 hearing was one of the first to be held on President Obama’s budget for the next fiscal year. The hearing also marked the first time Secretary of State John Kerry testified before Congress in his new position.

Budget cuts are front of mind these days. The buzzwords surrounding fiscal austerity may be technical – sequestration, continuing resolution, furloughs – but concern about doing more with less is simple. Belt tightening touches everyone from the lawmakers who partake in these meetings, to the air trafficking controllers forced into furlough, to the teachers who lead our nation’s threatened Head Start programs. These thin days, even President Obama is taking a five percent pay cut.

But some who could be deeply affected by budget cuts are thousands of miles away from Rayburn 2172 – including the nearly seven million children around the world who die each year, largely of preventable causes, according to UNICEF.

So I was on Capitol Hill last week to get answers. How will the 2014 budget plan impact US global health work abroad? What impact could that have on children?

Somewhere in between, in whatever budget number prevails, it’s unlikely that all global health programs will fare equally. Even within the Obama administration’s proposed budget, for example, some programs would see funding increases while others would see cuts.

“Foreign assistance is not charity or a favor we do for other nations,” Kerry said in a written budget summary statement released earlier this month. “It is a strategic imperative for America.”

Back in Rayburn 2172, Committee Chairman Ed Royce (R-Calif.) pounded the gavel to commence the hearing. And he also signaled his view that any such “imperative” may not be enough to justify spending.

In this budget climate, “wasteful spending is intolerable, but even good programs must be subject to prioritization,” Royce said. “We can’t do everything.”

And so began Secretary Kerry’s inaugural hearing, what became a volley of statements and questions between House representatives and Secretary Kerry, focused on a range of topics from recent developments in Iran and North Korea, to the transition in Afghanistan, to last year’s attack on the US consulate in Benghazi.

But largely absent from the conversation was the topic of global health funding.

In his opening remarks, Committee Ranking Member Eliot Engel (D-N.Y.) made brief mention of US work on HIV/AIDS through the President's Emergency Plan for AIDS Relief (PEPFAR), but that was one of the few specific references to a global health issue.

State Department and USAID foreign policy expenditures comprise just one percent of the overall federal budget, although most Americans believe that number is more like 25 percent, according to a widely cited 2010 World Public Opinion poll.

The US global health budget is a fraction of that pie, and, according to advocacy groups, has traditionally enjoyed strong bipartisan support. And yet, under the cuts proposed by the House budget, the international affairs budget would be cut more than 10 percent from fiscal year 2012, according to the US Global Leadership Coalition. Global health allocations could become casualties of that cut.

The morning of the House hearing, hours passed and congressmen (indeed, more than 80 percent are men, according to the US Congress Handbook) flitted in and out of the room. Some were beckoned by aides, others by a seeming desire to be anywhere but in their seats.

In the echoing hallways, some congressmen were willing to talk — briefly — about global health.

“We’ve got a $16.8 trillion national debt and something’s got to give,” said Congressman Steve Chabot (R-Ohio), who voted for the 2014 Ryan budget. “I’m certainly aware that there is a place for aid to other countries. I think it’s in the US best interests, but… in these tough economic times as we are, it’s got to be on the table like everything else does for reductions.”

Asked for specifics, Chabot declined, like most of the dozen-or-so other lawmakers I caught in the hallway. As Adam Kinzinger, a Republican from Illinois and one of the youngest members of Congress put it, “I’d be going down a dangerous path to get into specific programs that we should and shouldn’t cut. I just think it’s something that we have to look at in general and understand the importance of foreign aid in the whole process.”

Other lawmakers had other matters on their mind. “I very much support what global health organizations have been trying to do,” said Matt Salmon (R-Ariz.). “But my scrutiny right now is probably … more looking at some of the foreign aid, military aid, that kind of thing.”

According to global health advocates I spoke with, some Republicans support global health programs quietly, behind closed doors, but can’t publically support them because their constituents do not.

In fact, only a handful of Republicans signed funding request letters addressed to the House appropriations committees over the last week that covered several global health budget lines, including PEPFAR and the Global Fund, tuberculosis, maternal and child health and nutrition, and international family planning and reproductive health.

Most of the lawmakers I spoke with said that they had not yet looked closely at Obama’s budget as it relates to global health, and that they planned to refine their views in the coming weeks as hearings unfold. “I really can’t tell you just how I’m going to prioritize everything yet,” said Charlie Dent (R-Pa.).

For organizations like InterAction, an umbrella aid advocacy organization, pushing for global health funding is an ongoing battle.

“We’re always playing defense, we’re always trying to push back, always trying to make our case,” said Jeremy Kadden, senior legislative manager. “It’s really important to understand that you’re not going to balance the budget based on cutting our accounts, but you will do a lot of damage to a lot of people around the world and really set our progress back.”

On a brief break from the proceedings, Committee Ranking Member Engel agreed with Commitee Chairman Royce that good programs will need to be prioritized and that not everything can be included in the 2014 budget. “I wish we could add more money,” Engel said. “Foreign assistance is inadequately funded, but we do the best with what we have.”