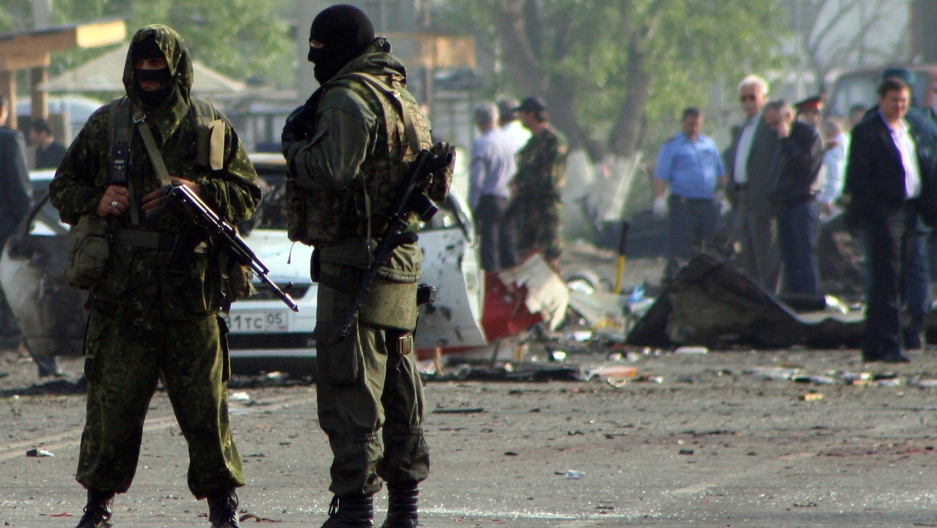 Special forces officers at the site of a militant bomb blast in the Dagestan's capital Makhachkala. The low-level violence shows no sign of abating.
Credit: AFP
Share

The North Caucasus insurgency, whose possible links with last week’s Boston Marathon bombing suspects are still being investigated, is the product of a 19-year sequence of miscalculations by the Russian leadership in its increasingly desperate efforts to retain control of the North Caucasus.

What is now a pan-regional movement that operates not only in southern Russia, but also neighboring Azerbaijan, began in late 1994, when then-President Boris Yeltsin sent troops into Chechnya to “restore constitutional order.” Three years earlier, Chechnya had declared itself a sovereign state independent of the USSR in compliance with existing Soviet legislation — as had Ukraine, Kazakhstan and the other constituent republics of the disintegrating Soviet Union.

The difference, however, was that Chechnya was a province inside Russia, the largest of those 15 former Soviet republics. As relations between the its leadership and the Kremlin soured, many Russians believed Chechnya’s split would trigger the secession of other republics in the newly independent country.

The invasion of Chechnya triggered a mass popular resistance movement under the leadership of former Russian army Colonel Aslan Maskhadov that succeeded in retaking Grozny, the Chechen capital, within two years. Maskhadov was elected president the following year in a ballot the international community judged free and fair, and in May 1997, he signed an inter-state treaty with Yeltsin under which Moscow pledged never again to resort to military force against Chechnya.

But hopes of a stable peace were undermined by Russia’s failure to provide promised funds for reconstruction of towns and villages devastated during the fighting. And the secular nationalist Maskhadov was steadily sidelined and undermined by resistance fighters headed by renegade field commander Shamil Basyev, who was intent on transforming not just Chechnya but the entire North Caucasus into an independent Islamic state.

In 1999, Basayev’s men invaded neighboring Dagestan, providing then-Prime Minister Vladimir Putin with the pretext to launch a second war to avenge its 1996 defeat. After months of fighting, the Chechen resistance retreated from Grozny into the southern mountains to engage in a low-level war of attrition against the Russian military that continues today.

Moscow’s fearful obsession with the Saudi-style Islamic fundamentalism Basayev personified soon led to blanket reprisals in Ingushetia and Kabardino-Balkaria against young men known to be practicing Muslims. Flocking to fight under Basayev’s banner, they and their relatives carried out in large-scale revenge attacks on local police in 2004 and 2005.

In 2007, veteran Chechen commander Doku Umarov, the second of Maskhadov’s successors as Chechen president, abandoned the cause of Chechen independence and proclaimed himself the amir (military leader) of a Caucasus Emirate encompassing most of the region — the independent Islamic state that Basayev had dreamed of. Not all Chechen commanders approved the move: Umarov tried unsuccessfully to have one of the most respected dissenters assassinated.

But the ideal of expelling the Russian colonists and their local henchmen from the North Caucasus and establishing an Islamic state based on Sharia law, where practicing Muslims would no longer be at the mercy of a corrupt police force appealed to thousands of young men (and some women) across the region. The insurgency’s offshoots in the various republics set up a string of websites offering reports on military activities, practical advice to those considering joining and homilies authored by men who combined the roles of military commanders and home-grown theologians of jihad.

One of those men is the Dagestani Abu-Dudjan, whose video addresses featured on Tamerlan Tsarnaev’s You-Tube playlist. Another is the ethnic Buryat convert to Islam Aleksander Tikhomirov (aka Said Buryatsky). Many of the young Dagestani fighters who responded to the government’s offer of fair treatment if they laid down their arms subsequently admitted that it was under the influence of Buryatsky’s writings that they initially “headed to the forest” to join the insurgency.

For all their shared commitment to the concept of an independent Islamic state — and their formal subordination to Umarov’s leadership — the insurgency’s various wings act autonomously and tactics vary across the region. By far the most professional and deadly are the Chechens, who in recent years have launched high-profile attacks on the residence of Chechen leader Ramzan Kadyrov and the parliament building in Grozny. By contrast, in neighboring Ingushetia and in Kabardino-Balkaria, the fighters perpetrate primarily small-scale attacks, opening fire on police and security personnel under cover of darkness.

The current main focus of insurgency activity is Dagestan, the largest of the seven North Caucasus republics with a population of just under 3 million. Militants there launch attacks on an almost daily basis, targeting rank-and-file police officers, pro-regime clerics, and government ministers. Last year alone, 405 people were killed in shootouts or bomb attacks in Dagestan, including 110 police and security personnel and 231 insurgents.

That violence, against a background of poverty, widespread unemployment, disenfranchisement and endemic corruption, has resulted in a polarization between state-sponsored moderate Sufi Islam and the Saudi-style conservative Salafism espoused by the insurgency. An attempt one year ago by moderate Salafis to promote dialogue with the Sufis collapsed after the insurgency sent a woman suicide bomber last August to blow up Dagestan’s most venerated Sufi sheikh.

More from GlobalPost: In Dagestan, US blamed for Boston bombing

Despite their high casualty rate (Abu-Dudjan was one of two dozen mid-level commanders killed last year), there’s no indication the insurgency in Dagestan or elsewhere is on the retreat. Nevertheless, at the height of the wave of protests against Russian President Vladimir Putin in early 2012, Umarov announced a moratorium on terrorist attacks targeting Russian civilians such as suicide bombings in the Moscow metro in March 2010 and the capital’s Domodedovo airport in January 2011. With burgeoning foliage now providing cover to move undetected in the mountains, there is nothing to prevent a new wave of attacks this summer — unless, as some Russian politicians fear, Umarov decides to conserve manpower and materiel with the objective of launching a mega-attack on the Winter Olympic Games in Sochi next February.

Liz Fuller worked for 30 years as Caucasus analyst with Radio Free Europe/Radio Liberty in Munich and Prague. She is currently an editor for the Civilitas Foundation in Yerevan.