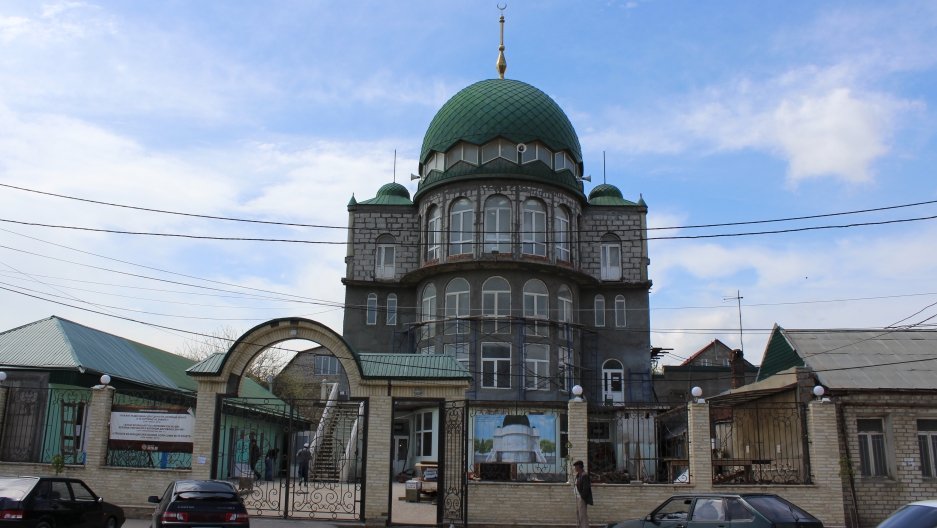 MAKHACHKALA, Russia — US investigators who questioned the parents of the Boston Marathon bombing suspects Tamerlan and Dzhokhar Tsarnaev here in the North Caucasus region of Dagestan are helping fill out what’s emerging as a picture of two brothers who acted alone, straddling two cultures and seeking purpose in increasingly radical Islamic beliefs fueled by extremist websites.

However that’s not what they’re likely to hear from people here.

"Islam equates the killing of a single innocent person to the murder of all humanity,” the brothers’ aunt Patimat Suleimanova said in an interview. “Tamerlan and Dzhokhar couldn’t have taken part in the Boston terrorist attack in Boston.”

The brothers' parents Anzor and Zubeidat Tsarnaev, hunkered down with relatives and supporters in an apartment surrounded by a scrum of reporters from the United States to China, say they believe their sons were framed by American security forces.

The parents recently returned here from the United States after separating, partly because Zubeidat’s increasingly strict observance of Islam — reinforced by Tamerlan’s own growing religiosity — caused tension in the family.

The brothers remained in Massachusetts, where the family had been living since spending a year here a decade ago. However, one of the key questions in the investigation is what Tamerlan Tsarnaev, 26, did when he visited Russia for six months last year.

He spent much of the time in Dagestan, which is wracked by a violent conflict between Islamist insurgents and heavy handed security forces.

However, both officials and militants have said Tamerlan — who is believed to have spent much of his time sleeping and visiting relatives last year — had no contact with insurgents.

The head of Dagestan’s Security Council, Magomed Baachilov said there was no evidence Tamerlan associated with militants.

The Caucasus’ main rebel group, the Mujahideen of the Caucasus Emirate said they had nothing to do with the bombing. “We are not fighting with the United States of America,” the group said on its website. “We are at war with Russia.”

Tamerlan drifted toward radical Islam when his life in the United States began to face obstacles: he gave up aspirations to join the Olympic boxing team and dropped out of junior college.

He studied the Koran over the internet and posted YouTube videos denouncing the moderate Sufi strain of Islam traditionally practiced in the Caucasus as heretical.

However, leaders of the mosque Tamerlan is said to have frequented during his stay here — founded by a prominent family that had sided with Chechen rebels in the late 1990 — say they don’t remember him.

US federal prosecutors have charged year-old Dzhokhar — who remains in the hospital with serious injuries — with using a weapon of mass destruction and malicious destruction of property resulting in death, and faces the death penalty on each count.

Tamerlan, who died in a shootout with police on Thursday, was born in the Russian region of Kalmykia, where the Tsarnaev family came seeking employment from the Central Asian region of Kyrgyzstan, where Anzor had held prestigious government jobs.

Soviet leader Josef Stalin ordered the expulsion of all Chechens to Central Asia during World War II for what he claimed was their collaboration with the Nazis.

From Kalmykia, the family moved to Chechnya in 1999 after requests from Anzor Tsarnaev’s family clan, or teip. Following the launch of Moscow’s second war in Chechnya less than six months later, they fled to Dagestan — home of Zubeidat Tsarnaeva, who is an ethnic Avar — before becoming refugees in the United States.

More from GlobalPost: Confused Chechnya with the Czech Republic? Read this

Emirmagomed Davydov, principal of the school the Tsarnaev brothers attended during their stay here, said they both studied well. “They earned mostly As and Bs,” he said, adding that the brothers’ two younger sisters did better. “Tamerlan received good grades in the humanities,” he said. “Natural sciences weren’t so easy for him.”

Davydov agrees with a theory here that the Tsarnaev brothers may be scapegoats for the Boston bombing. “Let the Americans figure out themselves what happened,” he says. “The Tsarnaevs lived there, became socialized there. When they were in Makhachkala, they lived quietly and peacefully—it was an intelligent, normal family.”