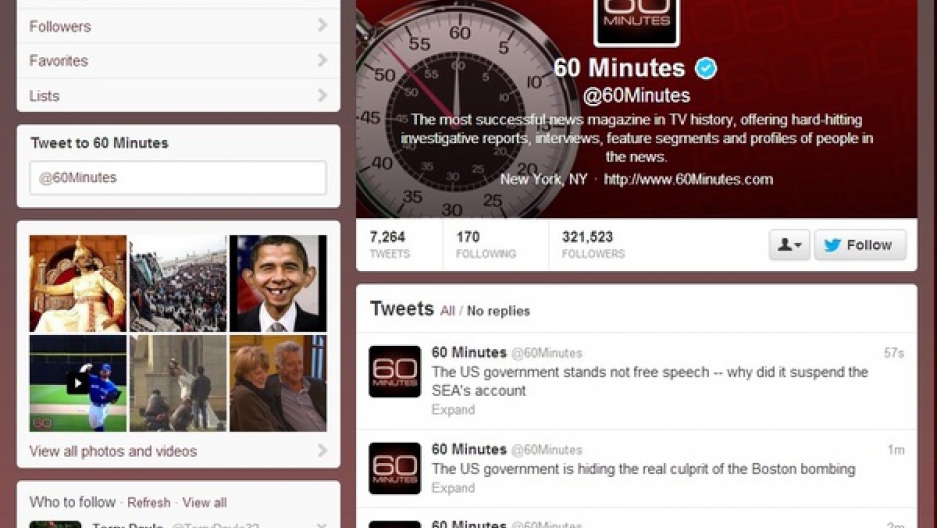 The hack on Sunday was the second attack launched by the Syrian Electronic Army against CBS News social media accounts.

The Syrian Electronic Army has targeted a number of Western news agencies and organizations, including NPR, the BBC and Human Rights Watch, to spread their message of support for Syrian President Bashar al-Assad. They also criticize Western media organizations for having an anti-Assad bias.

“Exclusive: Terror is striking the #USA and #Obama is Shamelessly in Bed with Al-Qaeda,” read another hacked tweet, arguing the SEA’s position that Syria’s anti-government armed groups are terrorists attempting to bring down the Assad government.

According to technology news outlet Slash Gear, several of the tweets also included links to a malware infested site — possibly part of the SEA’s campaign to gain even further access to social media accounts belonging to Western news agencies.

The SEA claimed responsibility for the hack on their official website, posting screenshots of the compromised accounts.

“The Syrian Electronic Army hacked today several Twitter accounts of CBS-American Network and published through it the truth,” read a statement on the SEA’s website.

In addition to their attacks against Western media, the SEA also collects personal information of human rights activists and rebel fighters within Syria. The hackers then pass the information along to the Assad government.

Syrian opposition figures claim that this information is then used to locate and kill prominent activists within Syria.

In March, NPR reported that anti-government hackers based in Turkey hack social media accounts belonging to these activists and remove and identifying information in hope of protecting them from attack.

"We replaced the flag of the revolution with pornography," rebel hacker Ahmed Heider told NPR. "Like pictures, you know, to keep the investigator busy."