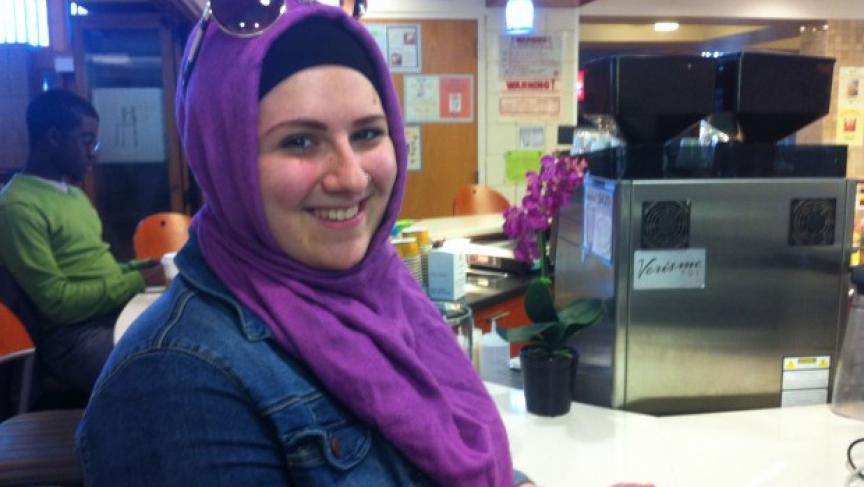 Share
Alexandra Minter, a sophomore at Tufts University was working on a video for her Arabic class last Monday when her classmate checked Facebook and saw there was an attack on the Boston Marathon. "And then once people started making accusations as to who it was, we were sitting there and I was telling the girl next me I really hope it wasn't a Muslim," says Minter. Minter's is not a typical story. She grew up in rural Wisconsin. Her mother converted to Islam after marrying her stepfather who was from Morocco. While Minter accepted her mother's conversion, the teasing began at her school. "I got called Arabian girl," she says. About a year ago Minter decided to convert too. When she first put on a hijab, things changed. Minter's only been a practicing Muslim for a little more than a year but already she's experienced prejudice in Boston. "I've had people ask me weird questions on buses before or just get uncomfortable and get up from seats on the train," Minter says. "I wear a headscarf so for a lot of people that creates fear, but I'm worried that it's going to happen more now." The second looks on the bus Minter gets, and her hope that the Boston bombers weren't Muslim — none of these feelings surprises her classmate Chowdhury Shamsh who is the head of Tufts' Muslim Student Association. "It's not going to stop unfortunately. That's something that she's going to have to live with," says Shamsh. Shamsh grew up in New York City. He was only 10-years-old when the Twin Towers were attacked. It was a turning point, not just in his life in the US but as an American Muslim. "We were a model minority and nobody thought twice about having a Muslim sit next to them on the train," says Shamsh. All that changed post 9/11 says Shamsh. His mother warned him against becoming a Muslim leader on campus, practicing his faith so openly. "She says why can't you just practice and just keep it in your room and don't be too open about it," he says. That pressure to stay under the radar makes him feel like a part of a group that's supposed to feel culpable somehow. "I don't know how much is in my head because of the media, and the portrayal, it may be internalized it may not be real but I do feel different because of the color of my skin or my religion," he says. When news broke about the bombings, the media went into overdrive hypothesizing about who could have done this including many reports about race and religion of the possible suspects. "The way that even our justice system and media talk about incidences based on the identity, race and religion of the perpetrator is also something that feeds into why our community fears backlash," says Linda Sarsour, head of the National Network for Arab American Communities in New York. Minutes after the bombings, her 14-year-old son texted her asking, "Mom, who did it?" "It's hard to tell kids that it will be better because every time I say something really terrible happens and it gets kids back to the mindset but I didn't do that," says Sarsour. "It's traumatizing as a adult to not be able to tell young people that everything is going to be okay." But Shereen Shafi, an undergraduate studying International Affairs at Johns Hopkins University in Baltimore sees a silver lining. "I had to respond to peoples' attacks and that led me to look more into the faith itself and also the history surrounding it," Tshafi says. Shafi's parents, both doctors, came to the US from Pakistan 20 years ago. She was born here and has only been to Pakistan once, when she was six. Growing up, her family observed the Muslim faith. She went to Sunday school, celebrated Eid, but being Muslim wasn't a huge part of her identity, she says, until her faith got more and more scrutinized. "I think that's the case with more and more believers having it made a big deal strengthened my connection to the faith and faith community," she says. Shafi feels angry at the brothers who attacked people, at the racial profiling of Muslims, at the fear she's felt these past few days when heading outside alone but it's more complicated than pure anger." "People get angry at Osama Bin Laden for making Muslims look bad and I think that's generally how I felt when I was younger," Shafi says. "At this point, because these kids were just your average teenagers … the older brother had some issues. I feel more sad that someone would be driven to do this. I do feel angry at the way they make Muslims look. I guess I'm upset that people are extrapolating from them to the broader community." There's sadness but each student was also quick to point to a hopeful future. Shamsh, the Muslim student leader at Tufts, put it like this: "America's not perfect but the beautiful thing about America is that there's room for improvement," says Shamsh.