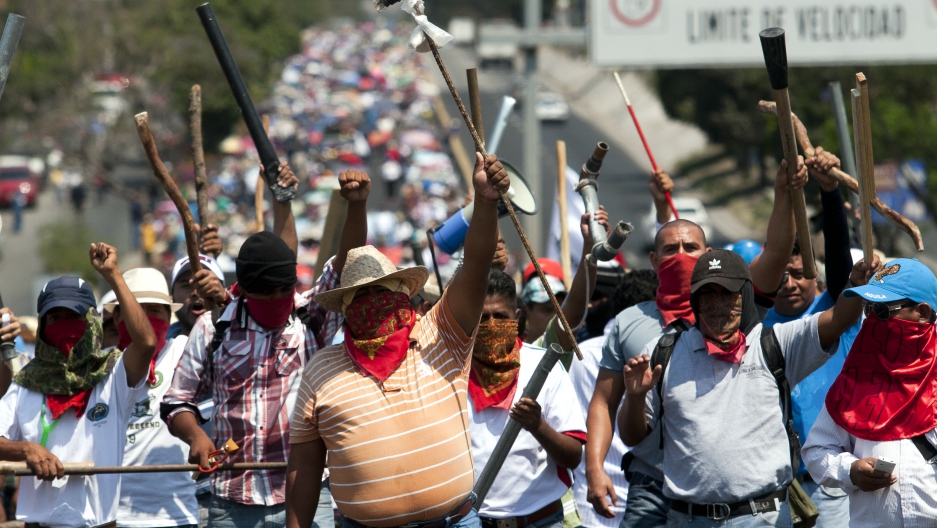 Striking teachers in the impoverished southern state of Guerrero have launched fierce resistance to Peña's national education reforms, with protests that threaten to spread across southern Mexico, and possibly further.

Meanwhile, the “Pact for Mexico,” a multiparty alliance that's anchored the government's strategy, is showing deep fissures. The opposition National Action Party, or PAN, whose dozen-year hold on Mexico's presidency ended when Peña took office Dec. 1, has pulled out.

“People are worried, alarms are beginning to sound,” analyst Federico Estevez said of Peña and his supporters.

The Pact for Mexico, forged last fall among Mexico's major political parties, until now has guaranteed congressional approval for Peña's labor, education and telecommunications reforms. It will prove crucial to the promised revamping of Mexico's state-owned energy industry to be taken up by Congress in the fall.

The pact's unraveling could scuttle the reform processes, key elements of which already remain stuck in congressional committees. Less-than-successful reforms in turn could sour domestic and foreign investors on the prospects for the so-called “Mexico Moment” of economic progress being promoted by Peña — often called by his initials, EPN — and his supporters, analysts say.

“If the Pact for Mexico is over, then the likelihood of a strong rally on Mexican asset prices will be limited, in our view," Benito Berber, a New York-based analyst for Nomura Securities, wrote Tuesday in a note to clients. “However, if EPN maneuvers out of this situation, the Pact for Mexico would be strengthened. For now we think only one thing is certain, some cracks in the Pact have appeared.”

National Action leaders have been angered by recently uncovered plans by federal and state officials of Peña's Institutional Revolutionary Party, or PRI, to use social welfare funds to influence July's local elections in the southern bellwether state of Veracruz. The PAN demanded the impeachment of Peña's social development secretary and Veracruz's governor as well as guarantees government officials will keep hands off in the July votes in about half of Mexico's 32 states.

Peña vowed in a speech Tuesday that his government "will not tolerate using social programs for electoral purposes." But last week he offered support for the embattled Cabinet secretary, telling her to hang tough in the face of politically motivated criticism.

National Action leader Gustavo Madero in turn has “crossed the Rubicon” and will prove unable to back down without significant Peña concessions, said analyst Alejandro Hope of the Mexican Institute for Competitiveness, an economic think tank in Mexico City.

“The pact is breaking at the seams,” Hope said. “Even in the absence of Veracruz, the election season was going to be very tough.”

The statutes that will give life to the education reforms — as well as those aimed at labor laws and the telecom industry — already remain hostage to ideological differences and the rapidly shifting political environment in congress. Energy and fiscal reforms have been postponed for later this year.

“This government has had some success in passing broad-stroke reforms but not in implementing the nitty-gritty policy details,” Hope said.

The national reforms seek to weaken the hold that teachers unions have had on education policy at the state and federal level. Key sticking points include requiring teachers to pass professional exams and ending their lifelong guarantees on employment.

Among other issues, the Guerrero protesters insist on the continued unconditional hiring of all graduates of the state's teachers colleges without those hires having to pass qualification exams. They are also insisting that public education not be privatized, something neither Peña nor his aides have proposed.

Peña administration officials say that any local laws that conflict with the national reforms will be unconstitutional and would be appealed in the Supreme Court. They have threatened to fire teachers who remain on strike.

"The reform will prevail," Education Secretary Emilio Chuayffet told an interviewer Monday on Milenio TV, one of Mexico's main news networks. "Because the law will be fulfilled. There is no going back."

A dissident union in Michoacan on Tuesday announced an open-ended general strike in the schools it controls, expressing support for the Guerrero protests and pressing its own agenda on state officials. And other local unions in southern Chiapas and Oaxaca states have announced strikes as well.

In addition, Guerrero's striking teachers have gained the support of local “self-defense” militias that formed this year in the mountainous state's poor rural communities. Alleging out-of-control crime, those militias have challenged state and federal security forces’ control in a number of municipalities. Similar armed groups have been formed in Michoacan and elsewhere, accused by officials of ties to criminal gangs.

“They are wary about how much this could extend,” Estevez, the analyst, said of Peña aides' reaction to the protests. “Should it spread they have a major problem before them. Maybe there's a real problem with spillover.”

Still, Estevez said, Peña's political operatives “don't make big mistakes when they are pressed. So why expect to see it now?”