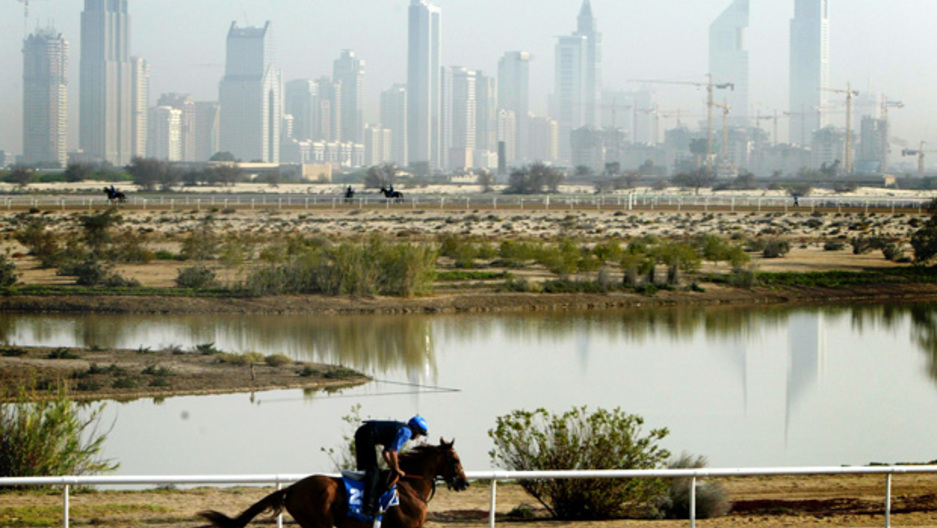 The skyline of Dubai is seen in the background as horses gallop at the Godolphin race track in Dubai. (Photo: REUTERS/Caren Firouz)

Share
Sheikh Mohammed bin Rashid Al Maktoum is the ruler of Dubai and the Prime Minister of the United Arab Emirates. He is also one of the most powerful figures in global horse racing. But a doping scandal involving horses at Godolphin, his stable for thoroughbreds, has rocked the sport. Earlier this month, 45 horses from the stable were tested for illegal doping and, the racing world has now learned, 11 of those horses tested positive for anabolic steroids. Cornelius Lysaght, the BBC's racing correspondent, says that "Godolphin is not one of the major stables of the world. It is the major stable of the world." Godolphin is based in Newmarket, a town in Britain that's the historic home of flat racing around the world. The stable is the crown jewel in a global breeding and training empire owned by the ruling family of Dubai, the Maktoums. It's overseen by Dubai's monarch, Sheikh Mohammed bin Rashid Al Maktoum. Godolphin was founded in the mid 1990s and is known for training and breeding some of the best horses in the world, running them in Britain, Europe, and the United States. (Sheikh Mohammed has a breeding center in Kentucky too.) "They've raised the bar," says Lysaught, "in that they had all these good horses, winning lots of good prizes, and setting new standards. [It] makes the news all the more surprising." A horse named Certify is the biggest name among the 11 from the Godolphin stable that've tested positive for steroids. Certify is currently unbeaten, having won almost a quarter of a million dollars in prize money so far. The horse was the favorite for a major race next month. But now Certify won't be allowed to run, and any punters who've placed pre-race bets will lose their money. The trainer at the center of the doping scandal is Mahmood Al Zarooni. According to the rules of racing, he's ultimately responsible for what's happened. While accepting blame, he's claimed that he thought the prohibition on steroids didn't apply to training periods, as opposed to actual racing. That's raised some eyebrows. "It's crystal clear what the rules are: they're just not allowed," says Cornelius Lysaght. Al Zarooni will face a disciplinary hearing in the next few days. Whatever the outcome, adds BBC racing correspondent Lysaght, the affair is hugely embarrassing for Sheikh Mohammed himself. "Godolphin is him; Godolphin is his baby; Godolphin was his invention," he says. "It's been very much one of the talking points of Godolphin that the Sheikh is known as a hands-on boss: he is known as 'The Boss'." There is no suggestion that Sheikh Mohammed himself was directly involved with the doping of these 11 horses but, adds Lysaght, "this would appear to have been taking place under his nose." Most of Godolphin's horses spend the British winter in Dubai, training in the sun where Sheikh Mohammed can see them personally. A video put out by Dubai's media office shows the Sheikh examining his horses, checking the strapping on their legs, and feeling their heartbeats. Indeed, Dubai has used thoroughbred horse racing to burnish its reputation for luxury sports and leisure. Now, in the racing world at least, that reputation needs some cleaning up.