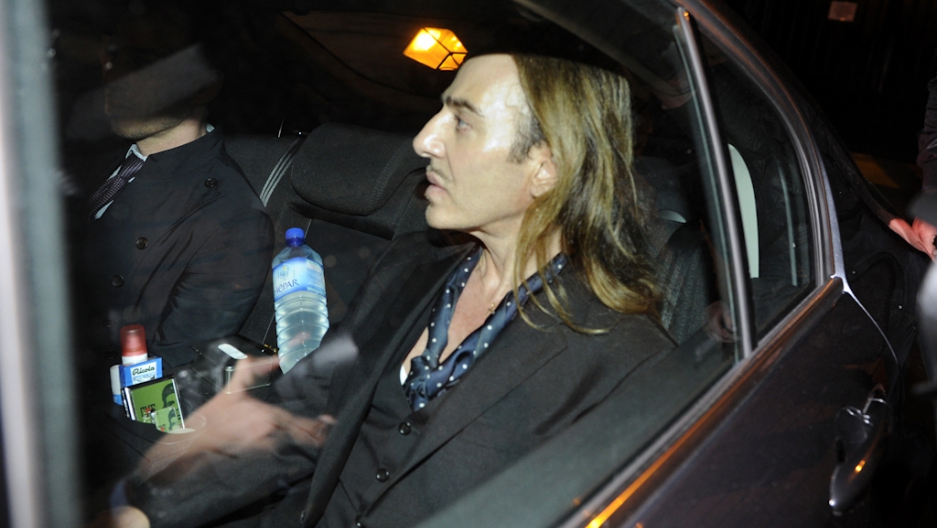 Fashion designer John Galliano leaves in a car after he stood trial for anti-Semitic insults in a Paris' court on June 22, 2011. Galliano was found guilty of hate speech September 8, 2011 in a Paris court and has been given suspended fines totalling $8,400.
Credit: BERTRAND GUAY
Share

Just as France passed a historic bill to legalize same-sex marriage, hate speech is trending on Twitter. While many people are celebrating gay rights with the popular hashtag  #mariagepourtous, meaning "Marriage for All," opponents of gay marriage have been tweeting under the hashtag #IlFautTuerLesHomosexuels, or "Homosexuals must be killed." And Twitter is allowing it.

Doesn't a hashtag threatening death against people violate one of Twitter's policies, to say nothing of French law? We emailed Twitter's press people asking this and haven't heard back yet.

The microblogging site is normally extremely hesitant to monitor content, however. The company did not censor any user account in its history until last October,  when it blocked a neo-Nazi group from joining.

Shortly after that, Twitter got caught up in another hate speech scandal in France. The hashtags #unbonjuif and #agoodjew  were proliferating on Twitter, but the company finally removed them after being threatened with a lawsuit.

"Twitter does not mediate content," the company had  said in a statement at the time. "If we are alerted to content that may be in violation of our terms of service, we will investigate each report and respond according to the policies and procedures outlined in our support pages."

The "Homosexuals must be killed" hashtag may also run up against France's strict anti-hate speech laws.

Under the First Amendment, hate speech in the US must be likely to cause violence or harm in order to be deemed "criminal." But in France and other European Union countries, speech can be prohibited if it is only abusive.  The Jewish Weekly notes  that there are also many laws that attempt to regulate Holocaust denial in Europe.

In one famous example, French designer John Galliano  was arrested in 2011 for a Mel Gibson-esque anti-Semitic tirade he went on in a bar. A French court eventually decided  to fine him.