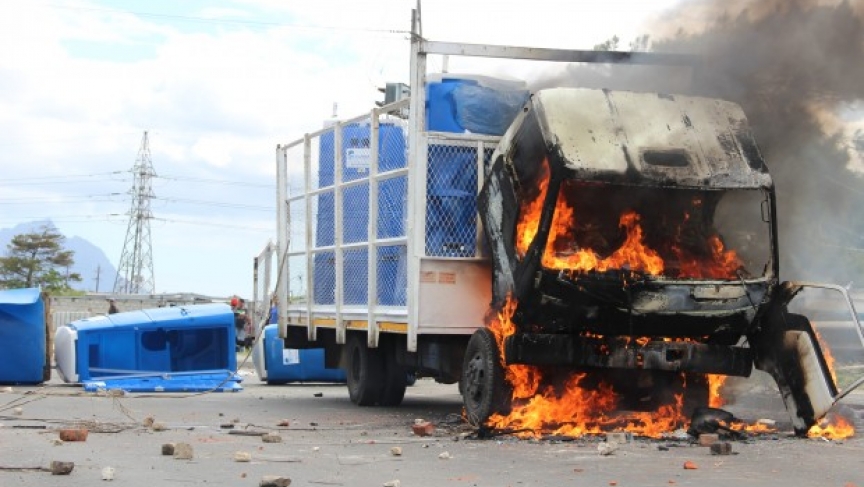 A burning truck blocks the road near Khayelitsha township.

Yesterday, it took me a long time to get to COSAT. That’s because what you see in the photo above was blocking my way.

It all started when I was on the N-2, the main highway that runs from Cape Town to Khayelitsha. Traffic was blocked by police, who were rerouting cars to a side road. I asked a police officer what was going on.

“They’re burning tires on the N-2 highway,” he said. “Protests.”

We were sent to Landsdowne Road, which runs parallel to the N-2. The idea was to get us around the burning tires, and back onto the highway. But, a few hundred yards ahead, in the middle of Landsdowne Road, a plume of black smoke suddenly appeared. Police cars rushed past us and blocked the road.

Our detour was given a detour.

I parked my car and got out to see what was going on. Passing some pedestrians and police cars, I saw the source of the smoke: a truck that had been transporting mobile toilets. Several toilets were strewn across the road, and the truck was on fire. I was told that an angry mob of about 70 people was responsible.

These kinds of protests – burning things, blocking major roads – are common in South Africa. Usually, they’re about a lack of basic services: water, toilets, and housing. In this case, the targeting of a portable toilet truck suggested frustration with sanitation facilities.

These kinds of protests are so common that, during a recent classroom debate at COSAT, students argued about their morality.

Ms. Bikwana, an English teacher, had put forward this motion: If the government won’t listen to us, we have the right to express ourselves by any means at our disposal.

Almost instantly, the conversation turned to protests where roads and property are damaged.

“Is it a right to vandalize the street? It’s not a right,” said Sive, an 11th-grader.

He argued that young South Africans should break with an age-old tradition of destructive protests. “Just because your grandparents vandalized the roads because they wanted to be heard, doesn’t mean you have to,” he said.

His classmate, Nosipho, agreed. She said that destructive protests just hurt the protesters – and the people in their communities. “Because the money that is used [to repair] things that have been vandalized would be helpful, for building houses,” she said.

“[Protesters] are vandalizing the things that are useful to them,” she added.

But other students said the opposite.

Nkonyisa, an 11th-grader, said that in South Africa, destructive or violent protests are the only actions that elicit a response from the government. “If we were not protesting for our rights, we would still be living in shacks and we would not be having a school like this one,” she said.

Her classmate, Bridgit, agreed. She said violent or destructive protests are sometimes necessary. “If it weren’t for [protests], we would still be living in apartheid,” she said.

And a student named Bayanda asked how long people who lost their homes to a recent fire must wait before staging a violent protest.

“Their houses were burned down. Do you expect them to wait for three, four, five years?” he asked.

As things wrapped up, I asked Ms. Bikwana which side had won the debate.

“I can’t say one side really won,” she said.

She said neither side made especially persuasive arguments. But, she said, both sides seemed to understand the dilemma – and that’s what counts.