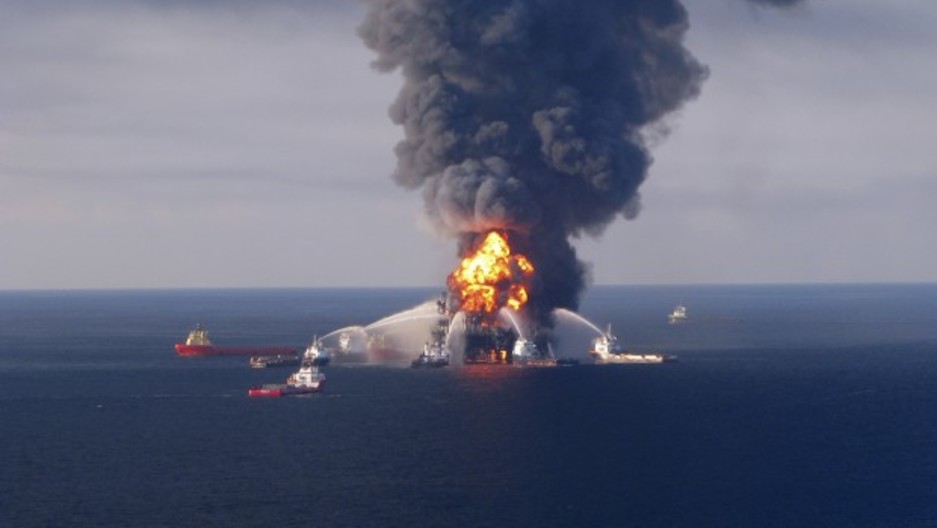 Fire boat response crews battle the blazing remnants of the off shore oil rig Deepwater Horizon, off Louisiana, in this handout photograph taken on April 21, 2010 and obtained on April 22. The oil drilling rig that had burned for 36 hours in the Gulf of Mexico sank Thursday as hopes dimmed for 11 missing workers and the risk of a major oil spill loomed, officials said. Picture taken April 21, 2010. REUTERS/U.S. Coast Guard/Handout (UNITED STATES - Tags: DISASTER ENERGY) FOR EDITORIAL USE ONLY. NOT FOR SALE FOR MARKETING OR ADVERTISING CAMPAIGNS - RTR2D58H

Share
Three years after the start of the Gulf oil disaster, many cleanup workers in the region are experiencing a range of health impacts. Now a report in Newsweek magazine alleges that BP hid from workers information about the toxic effects of the dispersant it used to break up the oil. Host Marco Werman speaks with journalist Mark Hertsgaard.