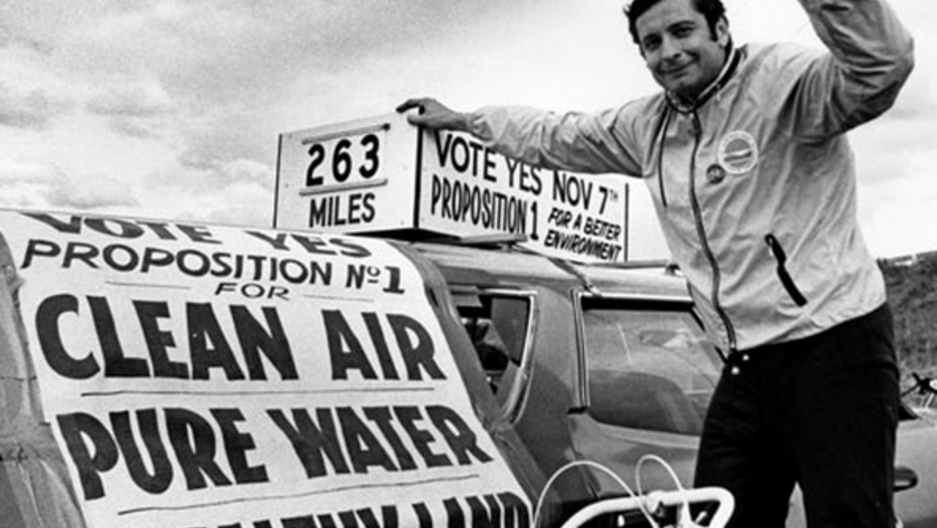 Denis Hayes was one of the early organizers of Earth Day. (Photo courtesy of the New York Department of Environmental Conservation.)

It began in the style of the Vietnam War protests back in 1970 as a “teach-in” about America’s - and the world’s - badly polluted air and water.

And on the CBS Evening News of April 22, Walter Cronkite explained its significance.

"A day set aside for a nationwide outpouring of mankind seeking its own survival. Earth Day," he said. "A day dedicated to enlisting all the citizens of a bountiful country in a common cause of saving life from the deadly byproducts of that bounty. The fouled skies, the filthy waters, the littered earth."

By some estimates, 1 in 10 Americans participated in that first Earth Day. They were mostly young and white.

Denis Hayes, the coordinator of that first Earth Day, gave a call to action at the first rally in Washington, D.C.

"We are systematically destroying our land, our streams, and our seas. We foul our air, deaden our senses and pollute our bodies. That's what America's become," he said back then.

Well, 43 years later, Hayes is still going strong. Back in 1970, he was worried about air pollution in our environment and our bodies. Did we rise to that challenge? Are we better off today — or are we worse?

"We did a wonderful job with the things that are visible. And there was this period between 1970 and 1974 where we passed the Clean Air Act, the Clean Water Act, Safe Drinking Water Act, Marine Mammal Protection Act, Endangered Species Act, Environmental Education Act and on and on," Hayes said.

The Environmental Protection Agency was established as well.

"But they're every bit as dangerous and now we need to rise to this new set of challenges," he said.

Earth Day is one of — if not the — world's most widely observed secular holiday with 170 or more countries celebrating.

"We've had collections of more than 20,000 saffron-robed monks from Southeast Asia coming together for a massive celebration of the Earth in Thailand," he said. "We've had things in the most remote villages where Peace Corps volunteers have taken photographs of these things where they're working on environmental projects."

In America, one thinks people are planting trees and picking up litter. Hayes says the power of Earth Day, though, has never been in cleaning up streets — but in its power to articulate a set of values, but few restrictions on how people address it.

"In the first one we had folks who were pounding apart automobiles with sledgehammers to protest air pollution from automobiles," Hayes said. "You can protest the Exxon Valdez, but Americans who dump their used motor oil down the storm sewer are dumping more than 12 Exxon Valdezes into our most vulnerable waterways every year."

Hayes says his hope is that Earth Day will again create "a framework and then encouraging vast amounts of creativity" to solve the problems we face. Hayes says he came to the environmental movement after reading an article by U.S. Sen. Gaylord Nelson, advocating for an environmental teach-in.

"I, with the arrogance of youth, flew down to Washington, D.C., and got a 15-minute meeting set up with the senator — and it turned into about a three-hour meeting as we discussed what one might do to pull together this event," he said.

He left with the intention of creating just such an event — in Massachusetts. Two days later, he was organizing an event for the entire country.

"For me, it was truly a life-changing experience," he said.