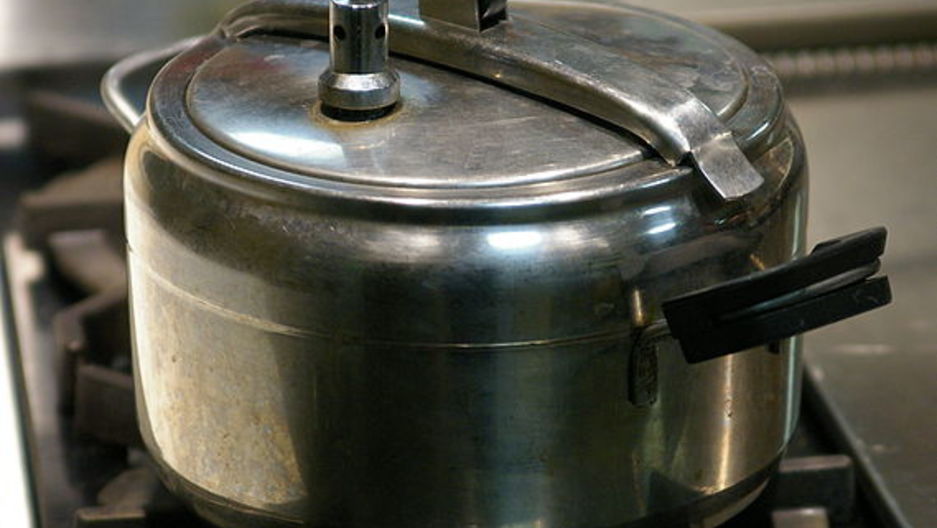 Pressure cookers are a convenient way to cook food faster. But they were also likely used to build bombs in the Marathon attacks. (Photo by Hustvedt via Wikimedia Commons.)

The type of bomb used in at least one of the Boston attacks is one that many recent veterans are all too familiar with.

It was fashioned out of a pressure cooker.

The devices are common in kitchens around the world. Instructions for turning them into bombs are distressingly easy to find. But hopefully their misuse as devices to wound and kill won’t obscure their value for bringing people together.

After all, there is something particularly pernicious about re-purposing a cooking pot as a bomb — putting a tool for food to such obscene ends.

Could there be two objects in starker opposition? So let’s reclaim the pressure cooker, an object that many American kitchens have long forgotten.

Andrea Wenzel, a journalist, hadn’t seen one in the United States, for instance.

Wenzel first used a pressure cooker while she was working in Hyderabad, in India. She stayed with a family there, learning to make local dishes with one. In fact, the pressure cooker is common throughout South Asia. It’s not hard to see why: it cooks food quickly and efficiently.

“You want to cook some chickpeas,” said Wenzel, “in a normal thing it’ll take forever. In a pressure cooker it’s much faster. And it probably takes less gas that way also, when you’re cooking on a stove.”

Later, Wenzel moved to Afghanistan and found that the pressure cooker was ubiquitous in kitchens there too. It led to new dishes, new friendships and new insights.

Indeed, Wenzel came to see food in general as a means to resolve conflict.

“Between families, or between villages. I mean, if there’s an accident and someone’s been injured or worse, someone might show up at your front door with a sheep and a bag of rice and ask for forgiveness,” she said.

It’s not entirely as simple as that, she adds. In such situations, the food is paired with nuanced negotiation too. But the food anchors the diplomacy.

Paul Rockower is a food lover with a masters in public diplomacy, and he’s researched some of the ways entire countries have used food to extend themselves around the world. Rockower calls the field gastrodiplomacy.

“The first country to really conduct gastrodiplomacy was Thailand,” he said. “They had a program called the Global Thai program which they introduced in 2003, which was meant to expand the number of Thai restaurants around the globe.

“They gave soft loan money to help promote the restaurants, and they made access to Thai ingredients more available for Thai chefs," he said. "Basically they decided the best way that they could communicate their culture was by using their food and their restaurants as forward cultural outposts.”

Korea has had a ‘gastrodiplomatic’ program too, says Ruckower, in part to distinguish Korean culture from that of Japan.

“They even supported a program called the bi bim bap backpackers," he said. "(It was a) group of Koreans who were traveling around making the Korean dish bi bim bap for all the people they met along the way.”

Peru, Taiwan and others — all sort of countries have been getting in on gastrodiplomacy, including, as of last fall, the United States. The State Department launched a Diplomatic Culinary Partnership, which connects chefs from around the world with people in the industry over here.

“Food isn’t traditionally thought of as a diplomatic tool,” she said, “but I think it’s the oldest diplomatic tool. Certainly some of the most meaningful conversations I’ve had with my counterparts around the world have taken place over breakfasts, lunches, and dinners.”

All of this is to say: making food connects people. And that includes the pressure cooker, a tool for food that, after the events in Boston, deserves to be rehabilitated in Google searches and kitchens as quickly as possible.

If you search online you’ll find people from all over the world extolling the virtues of the device, including one particularly excitable German.

And, if you still need convincing, consider the pressure cooker’s patriotic pedigree.

During the Second World War, aluminum was regulated. As a result the manufacture of new pressure cookers was limited. But with fuel and food shortages, the cookers became less of a convenience and more of a necessity.

So those Americans who did have pressure cookers shared them with their neighbors.

Together, they made the best of hard times.