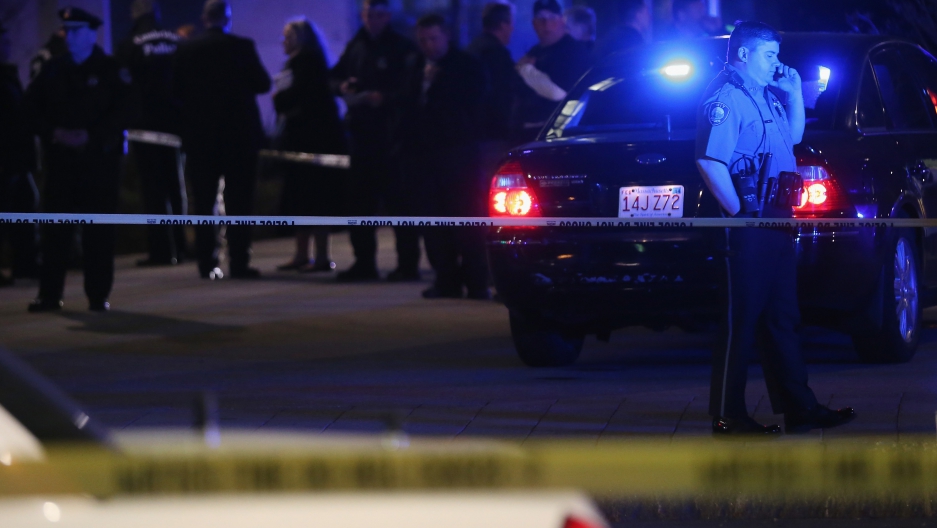 Police investigate the scene where a Massachusetts Institute of Technology campus police officer was shot and killed at the camous on April 18, 2013 in Cambridge, Massachusetts.
Credit: Mario Tama
Share

BOSTON, Mass. — One of two Boston Marathon bombing suspects was killed in the early hours of Friday, following a shootout in Watertown and the killing of a Massachusetts Institute of Technology police officer.

Another suspect remained on the loose, and police were combing a 20-block perimeter in Watertown, near Cambridge, to search for him.

A massive collection of federal, state, and municipal police was scouring the huge area. Residents were urged to stay indoors and only to answer the door if visited by a police officer.

"This is a terrorist. He came here to kill people," Boston Police Commissioner Edward Davis said at an early morning news conference of the second suspect, reported WCVB, adding that the situation was "fluid and dangerous."

The Boston Globe reported that the suspect killed was the person the FBI yesterday identified as Suspect 1, writing:

"The man seen wearing a black hat in photos released Thursday evening, is dead after firing bullets and launching explosives at police."

Boston.com also reported that the suspect had fired bullets and launched explosives at police.

NBC reported that one bombing suspect — wearing a black hat in photos released by the FBI — had been taken into custody on Friday but subsequently died.

Boston Police Commissioner Edward F. Davis, meanwhile, said that the man identified by the FBI as Suspect 2 — seen in images from the marathon wearing a white baseball cap — is still on the run.

Online observers listened intently to a live feed of Boston police, fire, and EMS scanners, streamed live on the internet, for the latest updates on the volatile situation.

Brighton resident Joshua Kasten reported early Friday that a manhunt was ongoing in Watertown, directly across the Charles River from his home.

"Rght on the other side of the river they have this massive manhunt going on, and if I stepped outside my house, I could probably see the police barricading the bridge across," said the software developer.

"The idea of this chase going from MIT to Watertown and then around for miles is absurd. Half the city is wrapped up in this," Kasten added.

The MIT campus in Cambridge is across the Charles River from Boston, and about 1.2 miles from the site of Monday's bombings at the finish line of the marathon on Boylston Street near Copley Square.

Thursday night’s violence began around 10:30 p.m. after police received reports of a robbery of a convenience store in Kendall Square near MIT, according to Boston.com.

Minutes later, an MIT police officer was shot multiple times while in his cruiser at Main and Vassar streets, near Building 32 — MIT's Stata Center.

He was reportedly taken to Massachusetts General Hospital but died of his injuries.

The MIT student newspaper tweeted that a campus police officer had been shot while MIT's "Emergency Information" site said there had been reports of gunfire at 10:48 p.m. local time.

"At 10:48 PM today gunshots were reported near Building 32 (Stata) which is currently surrounded by responding agencies. The area is cordoned off. Please stay clear of area until further notice. Unknown if injuries have occurred.. Although the situation is considered active and extremely dangerous, an investigation is underway. Updates will be provided at this site when more information becomes available."

A short time later, according to Boston.com, two men carjacked a Mercedes SUV at gunpoint. The SUV reportedly proceeded out Memorial Drive toward Watertown followed by a large number of police vehicles.

At one point during the pursuit, the two suspects opened fire on Watertown police and a transit police officer, who was in critical condition at a Boston-area hospital Friday morning.

During the gunfight, the man known as Suspect 1 was wounded. He was taken into custody and later died at Beth Israel Deaconess Medical Center in Boston, State Police Colonel Timothy Alben said.

Police have since been searching for the other bombing suspect, with some reports suggesting that he has explosives strapped to his chest.

Here is a map of the area currently being searched, showing the distance between the main MIT campus and Boylston Street, in Boston's Back Bay, where the Boston Marathon bombings occurred on Monday.

[View the story "Mayhem in Boston " on Storify]