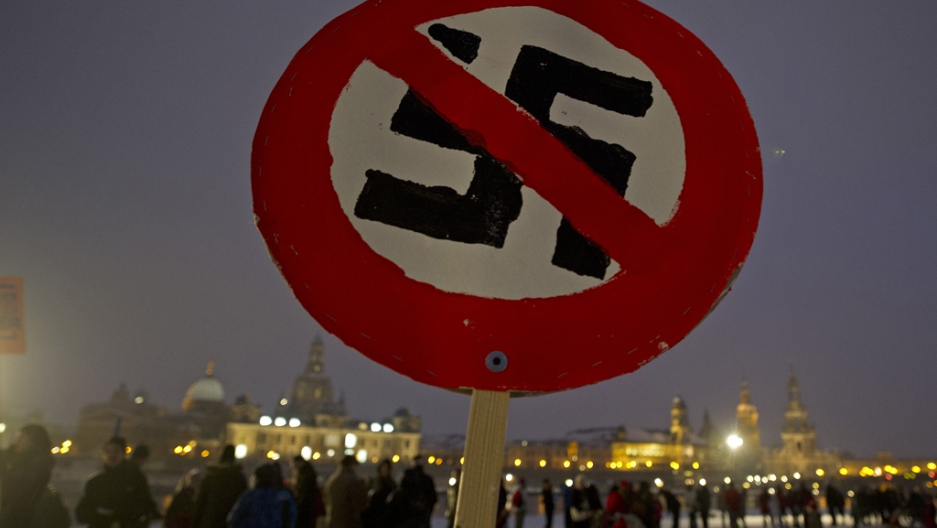 A protest against a neo-Nazis in Dresden, Germany, Feb. 13, 2013.
Credit: Robert Michael
Share

BERLIN, Germany — Next month in Munich, those associated with a long-unknown neo-Nazi terror cell go on trial for 10 murders allegedly committed over the last several years. The public and media outrage at the state for failing to uncover the group’s existence is another reminder of how sensitive Germany remains to its heinous past, and how serious it still is in confronting it.

On issues of national identity and cultural diversity, all aspects of German society tread carefully, perhaps to a point of diminishing returns. All, it seems, but its entertainment industry, which often seeks to rationalize, refocus or even rewrite a part of German history that deserves no justification.

“Unsere Mütter, Unsere Väter” (Our mothers, our fathers) is the latest addition to this genre. Premiering last month on ZDF public television, the fictional, 14 million euro ($18 million) three-part miniseries hoped to “intensify the dialogue” within German families, according ZDF's publicity for the program. The producers saw this as a last chance to provoke the war generation's fast-dwindling population to tell their stories.

However, if what “Unsere Mütter, Unsere Väter” presents to be those stories were accurate, all that children and grandchildren could ask is how could the war, and its systematic destruction of humanity, have happened when all of you were essentially good and did nothing wrong?

“Unsere Mütter, Unsere Väter” could have been a smart exploration of how a relatively integrated minority so quickly became the despised target of a sophisticated, omnipotent social campaign of mass murder. Instead, it is 270 minutes of cliché, superficial drama and offensive self-pity. “In summary,” writes Tobias Kaufmann in the Kölner Stadt-Anzeiger, “we perpetrators didn’t have it easy, either.”

The miniseries suggests that war makes everyone a victim. Of the five main characters, who are all friends from Berlin, Wilhelm is a loyal army officer on the eastern front, but begins questioning the war’s course and cause to the point that he just wants to live in peace and bother no one. His younger brother, Friedhelm, starts off ever so innocent but finds himself personally protecting a Nazi officer — until he kills him to save his Jewish friend, Viktor.

As Polish media jumped on, the miniseries shows the Poles as the true anti-Semites. The resistance group Viktor falls in with after unbelievably escaping an Auschwitz-bound transport treats him terribly and threatens to kill him despite his bravery and loyalty.

Had it actually been this way, National Socialism in Germany would have never made it past the Beer Hall Putsch. The Jews would have been more or less fine. In reality, as Kaufmann notes, it wasn’t the British or Americans who shot civilians, and the Danes protected their Jews. Only the Germans made extermination a war objective.

As viewed in “Unsere Mütter, Unsere Väter”, the war and its embedded crimes were carried out by someone else who was obviously pure evil from the get-go. When a small Jewish girl is executed point-blank, it is the ugly, mean, old Nazi who does it — to the shocked protest of cherubic, good-intentioned and relatable protagonists.

When nurse Charlotte, another of the main characters, reports a woman working at the army hospital is Jewish, she is immediately wracked with guilt that her actions will lead to this woman’s arrest, as if she had no idea what would result. The woman, who in reality probably would have been shot on the spot, manages, off-screen, to escape Nazi custody and come back later as a Soviet army officer. It’s just one more gross improbability that the series makes seem commonplace.

Of course, it's all true. There were good Germans, anti-Semitic Poles and lucky Jews. The Soviets raped and executed.

True but accurate, and those involved in and affected by Nazi terror were neither all equally guilty nor equally persecuted. To make such equivalence is a whitewash of history and an insult to the true victims and their would-have-been descendants.

The war over, the three surviving friends return to a destroyed Berlin and meet by storybook chance in the same bar they left four years earlier. They dust off a bottle of liquor, find three clean glasses and make a toast to the two who didn't make it — Greta, the mistress to a Gestapo commander, and Friedhelm, the Nazi lapdog. Fade out. Roll credits.

Such is the miniseries' final message: Remember the co-opted and complicit, as much as you might Viktor the hunted Jew, whose German identity was revoked while millions from his and other groups were obliterated by the madness of German National Socialism. In this light, “never forget” takes on a dangerously new and unintended meaning.

Bill Glucroft is a writer and provides communication services to companies around Berlin.