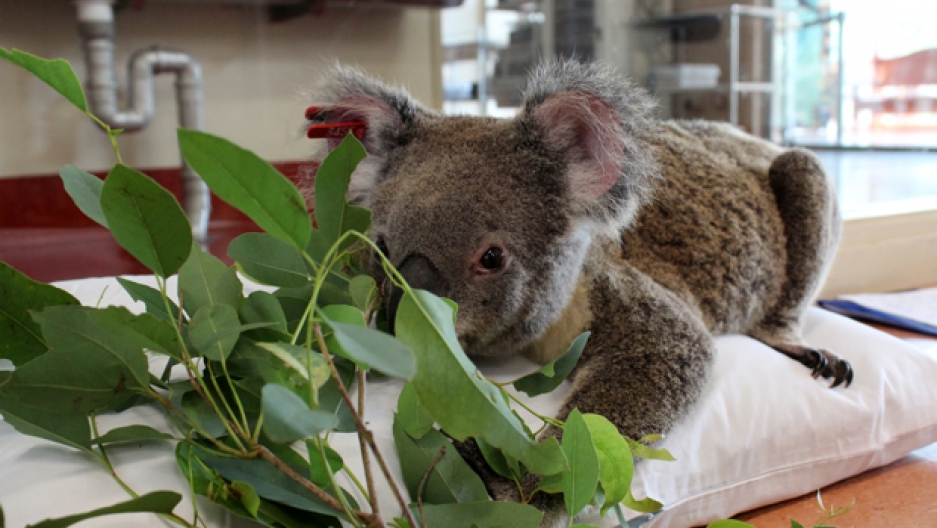 At the Australia Zoo Wildlife Hospital, a koala named Penny wakes up from a mild anesthetic and is offered a meal of eucalyptus. (Photo by Ari Daniel Shapiro.)

At the Australia Zoo Wildlife Hospital, about 50 miles north of Brisbane, a female koala, named Penny by those caring for her, is under a mild anesthetic.

“(I’ll) put some ultrasound gel in the pouch, and then we’ll have a look on this ultrasound machine,” veterinarian Amber Gillett said.

Gillett is checking Penny’s bladder for symptoms of chlamydia.

In people, chlamydia is a common sexually transmitted disease. A different strain infects koalas, but it too can be spread sexually, and it is causing a devastating epidemic.

“These are our koala wards,” said Gillett, pointing to a series of open-air enclosures. “(They) are generally always full with koalas all year round.”

Last year, Gillett and her team treated about 300 koalas for chlamydia. These included females, males, and the little ones — called joeys — that can pick up chlamydia from their mothers while suckling in the pouch.

Chlamydia causes blindness and infertility, and it can be fatal. In some parts of Australia, infection rates among koalas are as high as 90 percent.

“It’s a major threat to our population,” Gillett said.

It is not just chlamydia that is making koalas sick. Leukemia and lymphoma are increasingly common, too. The reason is something called koala retrovirus.

Virologist Paul Young of the University of Queensland says the retrovirus is a lot like HIV in humans. It suppresses a koala’s immune system.

“What we’re looking at is a virus invading the population in real time,” he said. “We’re actually looking at it as we speak.”

Young says every koala that he has tested in the northern part of the species’ range has been infected, and the virus is gradually making its way south.

Initially, the infection was probably transmitted from koala to koala through physical contact, but Young says within the last century, the virus has managed to insert itself directly into koala sperm and eggs.

“So as soon as a koala is born, they’ve got very high levels of the virus,” he explained, “and it remains that way for the rest of their life.”

Between chlamydia and the retrovirus, koalas in many parts of Australia are in trouble. In response, a small but committed army of people is working to save them.

Helping the Orphaned and Sick

Since 1999, Wanda Grabowski has hand-raised about 40 orphaned koalas in her home.

“I love everything about koalas,” she said, “from their little, furry ears down to the little poo that pops out of their bottoms.”

Grabowski and others like her call themselves “koala carers.” They ensure that the young joeys of sick mother koalas survive.

Grabowksi says it is not easy rearing these baby animals in their first year of life. “Joeys are most active at nighttime, so you have to turn your day into night,” she explained.

And then, when they are a little older, you have to cut and collect fresh eucalyptus leaf, which can mean driving hours every day. If all goes well, the young koalas are eventually released back into the wild.

“I always investigate the sites where my joeys go,” Grabowski said. “You wouldn’t want to send your kid off to some strange place, would you? You’d check it out. So that’s what I do — as a good mum.”

Adult koalas that recover at the hospital are also released back into the wild — as long as they remain fertile. At that point, wildlife biologists like Jon Hanger continue to look after them.

Hanger visits a eucalyptus woodland outside Brisbane about once a week to check on a handful of koalas.

“By tracking them and regularly monitoring them, we can certainly detect if they become ill again,” he said.

If he finds a koala that needs additional medical attention, Hanger will bring it back to his clinic or the hospital for a workup.

On a recent day, Hanger stood in the forest and unfurled an antenna. Some of the animals here have been fitted with radio collars. Hanger punched in the frequency for a collar on his receiver.

He followed the signal and came to the base of a tall tree. Hanger pointed 20 feet up into the branches.

“The koala we’ve just tracked is a koala called Maggie,” he said.

She was sitting in a fork of the tree, gripping the bark.

A couple of years ago, Maggie ended up in the hospital. She had chlamydia, but the infection was caught early.

“She was given antibiotic treatment and that was effective in curing her of that infection,” Hanger said. “Her fertility was retained. She’s had two joeys since then, and hopefully she’s got a third one in the pouch as we speak. So she’s a real success story.”

Long-term success in battling these diseases, however, may only come if koalas can be prevented from getting sick in the first place. That is where researchers at the Queensland University of Technology enter the picture.

Microbiologist Peter Timms and his team have developed an experimental vaccine for koala chlamydia. The lab has pursued it alongside a vaccine for chlamydia in humans — something that still needs a lot of work.

Timms says preliminary research on the vaccine for koalas suggests that it can produce an immune response that could protect the animals from becoming infected. He wants to start using the vaccine soon and has a couple of field trials planned, but he admits that vaccinating all the koalas in Australia is not realistic.

“We don’t see it being practical to find the last koala in the last tree out in the middle of Queensland,” he said.

Still, thousands of koalas are already being handled each year at hospitals and other care facilities, and he would like to see them vaccinated.

Many of these koalas have been struck by cars or attacked by dogs. Others have been pushed off their land due to suburban sprawl.

Timms says all of these threats add up to a dire future for koalas, which makes it all the more important to vaccinate them against chlamydia and, perhaps one day, the retrovirus, too.

“Because maybe now we can make a real difference there that we weren’t making before,” he said. “You should try and pick some battles, I think, where you can win.”

Winning the battle against disease will not by itself ensure the survival of koalas in the wild. But, Timms says, at least it is a start.