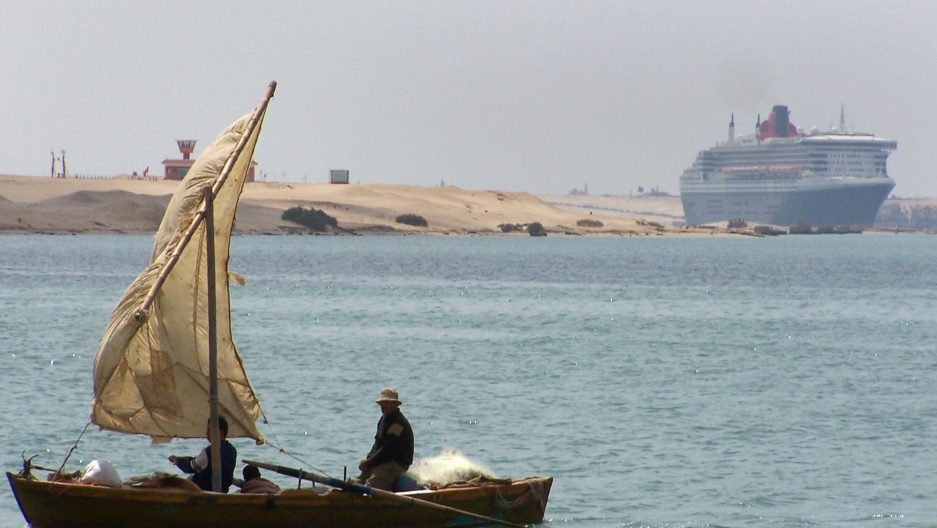 A traditional fishing boat navigates off the Egyptian port town of Ismailia, 80 miles northeast of Cairo, on March 28, 2009, as the luxury ocean liner Queen Mary II (R) transits northbound through the Suez Canal on its way to the Mediterranean Sea.
Credit: Getty Images
Share

Archaeologists have discovered the oldest harbor ever found in Egypt, on the shore of the Red Sea.

The port, located in the Wadi al-Jarf area, 112 miles south of Suez, was in use 4,500 years ago, during the reign of the Pharaoh Khufu (Cheops) in the Fourth Dynasty, the Egypt State Information Service said.

At the time, ancient Egypt exported copper and other minerals from the Sinai Peninsula.

The harbor was discovered by a team of Franco-Egyptian archaeologists who’ve been excavating the area since 2011, Discovery News reported.

The harbor "predates by more than 1,000 years any other port structure known in the world," team leader Pierre Tallet, an Egyptologist at the University of Paris-Sorbonne, told Discovery News.

The archeologists found various docks, 25 stone anchors and the remnants of an Old Kingdom building where 99 anchors had been stored, Discovery News reported. "Some of them were inscribed with hieroglyphic signs, probably with the names of the boats," Tallet told Discovery News.

The team also found storage jars, pieces of rope and – most excitingly – 40 papyrus fragments that chronicle the 27th year of Khufu's rule.

"These are the oldest papyri ever found in Egypt," Egypt's antiquities minister, Mohamed Ibrahim, said.

More from GlobalPost: The biggest infrastructure projects of 2013