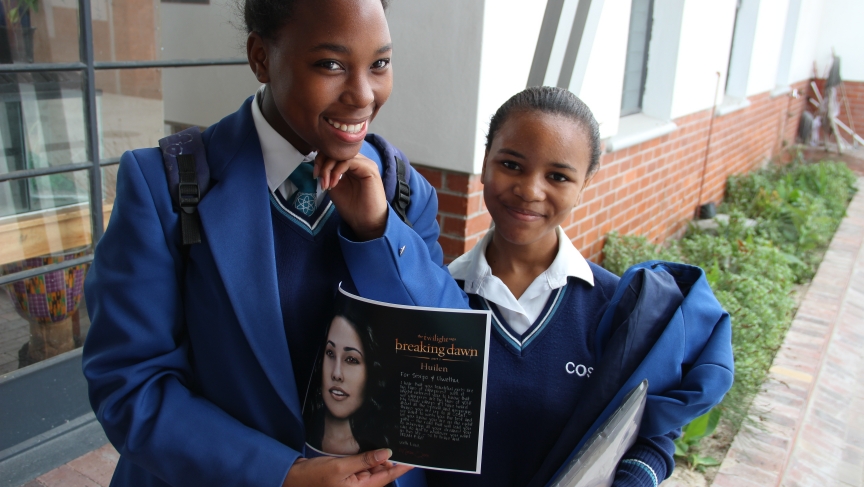 In the U.S., teenagers’ obsession with vampire literature seems to be waning. (Though I imagine many would dispute this.)

But at COSAT, vamp lit is anything but dead.

A couple weeks ago, I asked three girls who were waiting to be picked up from school what books they were reading. They laughed, and said vampire novels.

The other day, I walked into the school library during silent reading period. The first two girls I found – ninth-graders named Olwethu and Sisipho – were reading Twilight books. (Yes, they’re available in the library.)

“Are you guys fans of the series?” I asked.

“Oh my gosh, yes. I’ve read all the books and seen all the movies,” Olwethu said.

“I’m, like, the biggest fan of the series there is,” Sisipho added.

Yesterday, I bumped into Olwethu again. She was carrying a historical novel, set at the Globe Theatre in the days of Shakespeare. The back cover did not suggest vampires were involved.

“No more Twilight?” I asked.

“No, Mrs. Godden (an English teacher) told me I can’t read vampire books for a while. I was staying up until 3 a.m., and my eyes were all red,” she said.

I asked if she was enjoying this new Shakespeare book. She said she was. But she didn’t gush the way she did about Twilight.

“Why do you like the vampire books so much?” I asked.

“Well, I obviously don’t like the feeding scenes,” Olwethu explained. “But vampires have these unusual powers. Some of them can read people’s minds.”

“Is that something you wish you could do?” I asked.

“Yeah, especially with my family,” she said. Previously, she had described some communication and trust issues at home.

“And, vampires can move really fast,” Olwethu added. “When I’m washing dishes, I often think, if I were a vampire, I could be done with this in, like, two seconds.”

This is another thing COSAT students have often mentioned to me – how difficult it is to stay on top of schoolwork, with so many chores to do.

“And vampires are really smart,” she continued. “And they’re totally free. They’re free to do whatever they want.”

I’d never thought about vampires this way before: they’re smart, and free to do whatever they want.

They probably could excel at a school like COSAT.

And they probably wouldn’t be stuck in a township like Khayelitsha for long.

P.S. When I saw how excited Olwethu and Sisipho were about the Twilight books, I decided to send an email to my good friend Marisa Quinn. She’s an actress who was in the most recent Twilight film (as a vampire named Huilen). I asked if she might want to send a quick note to the girls.

As it turned out, Marisa had been following my series and was excited to connect with them. Here’s the note she wrote:

I hear that you beautiful girls are big fans of vampires? Well, it might interest you to know that we vampires are big fans of YOU! My fellow vamps & I have heard about all the special and inspiring things you are up to at COSAT. We want to wish you the best and let you know you are on the right path — the road that will lead you to achieving all your dreams! You can do and be whatever you want in this life — so be brave and DREAM BIG!!”

Olwethu and Sisipho were incredibly excited to receive the message and photo. And they were fascinated to hear that Marisa had also come from a challenging background. They sent her “a million – no, a billion” thanks.

And they immediately declared her their new idol.