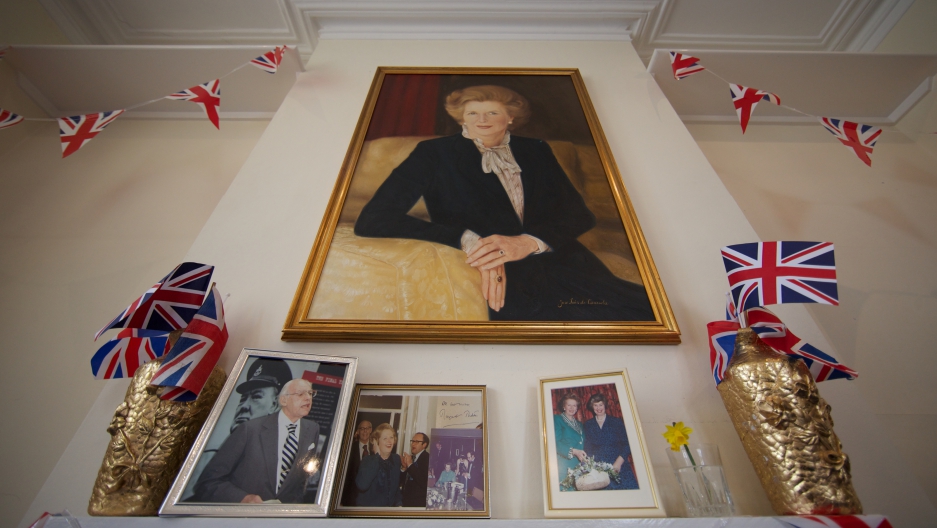 A portrait of former British prime minister Margaret Thatcher hangs on the wall at the Conservative Party headquarters in Finchley in north London on April 10, 2013. British lawmakers interrupted their holidays for a special session of parliament on April 10 to pay tribute to Margaret Thatcher, who died on April 8 at the age of 87 after suffering a stroke.
Credit: Andrew Cowie
Share

LONDON — After all the shouting and arguing since she died last week, Margaret Thatcher's funeral passed off comparatively quietly today. There were some small protests as the funeral cortege made its way up Ludgate Hill to St. Paul's Cathedral but considering the ugly arguments raging over her legacy, they were negligible.

Inside St. Paul's more than 2,000 people including 11 current prime ministers from around the world attended the funeral. Among them was Israeli Prime Minister Benjamin Netanyahu attending at the express invitation of the Thatcher family.

The personal invitation underscored the other "special relationship" in Lady Thatcher's life: with Britain's Jewish community.

Thatcher's death was marked by the headline in The Jewish Chronicle, "Margaret Thatcher: One of Us," over a picture of the late prime minister talking with Israel's only female prime minister, Golda Meir.

The phrase "One of Us" has special meaning. As her power grew, the late PM narrowed her circle of close advisers. She would ask, "Is he one of us?" to make sure that a new appointee to her cabinet fully embraced her world view.

The Chronicle was stating what many of its readers feel: Thatcher understood their world view like no politician before.

Ha'aretz, the Israeli newspaper, ran a comment that emphasized her high-achieving, outsider status as a woman whose father was a shopkeeper rising to run a party dominated by upper-class men — and noted this was something the community could relate to.

The origins of this special relationship with Britain's Jews were political and personal. For more than three decades Thatcher represented the London district of Finchley in Parliament, a constituency with a large Jewish population.

It would not be accurate to call Thatcher's district a "Jewish constituency," as there just aren't enough Jews in the country to be the largest group in any parliamentary constituency.

Size matters. For most of recent history the community has been self-effacing almost to the point of being self-erasing. The most prominent Jewish politician in British history was the Conservative Benjamin Disraeli, who was prime minister twice during the reign of Queen Victoria. Disraeli was a convert to Anglicanism, although he never tried to hide his origins, nor could he have if he tried. Anti-Semitic prejudice was ingrained in the party he led.

The community's self-effacement changed under Thatcher.

She appointed five Jews to her cabinet, an unprecedented number. Former Conservative Prime Minister Harold MacMillan, like current Prime MInister David Cameron a graduate of Eton, said that under Thatcher there were more "old Estonians in the cabinet than old Etonians."

In fact, Thatcher's "rabbi" in her against-all-odds rise through the upper echelons of Conservative politics was a secular Jew, Sir Keith Joseph, who introduced her to the radical monetarist economic thinkers Hayek and Friedman, who had a profound influence on her policies.

There was a natural affinity in much of the British community for Thatcher. Unlike their American co-religionists, who are seen as being predominantly liberal (now less true than it used to be, but still the way the community is viewed), British Jews are small-"c"  conservative by nature.

More than half worship at Orthodox synagogues as the liberal and reform wings of Judaism are very much in the minority here.

The Finchley constituency is on the northern edge of London, a suburb within the city limits where many Jewish families moved as they shook off the poverty in which they arrived in Britain.

The constituency was regarded as a safe seat and when Thatcher was selected to run for it in 1959 it was a given she would be elected.

She embraced the Jewish community as a base within her base. This was not political maneuvering, the relationship grew out of genuine feelings.

In 1938, Thatcher's parents took in a young Jewish woman from Austria fleeing the Nazis. Edith Muhlbauer had a pen-pal friendship with the then-Margaret Roberts' older sister.  She stayed with the family for several weeks while attempts were made to reunite her with her family. The young Thatcher raised money to help Edith on her way to Argentina where her family fled.

It was a formative experience. She came to loathe anti-Semitism. Like so much else, that put her at odds with the traditional leadership in her party. Not all anti-Semitism is the crude, Aryan Nation kind. Social anti-Semitism persisted at the top of the Conservative Party even into Thatcher's premiership.

As recently as 1988, the Sunday Telegraph, a staunch Tory paper, editorialized that one prominent member of her cabinet, Chancellor of the Exchequer Nigel Lawson was disqualified by his Jewish parentage from being named foreign secretary. In the event, Lawson remained in charge of the treasury.

Since then, Britain has had two foreign secretaries of Jewish origin, Sir Malcolm Rifkind and David Miliband.

The arguments about Margaret Thatcher's influence will not be buried with her. She was a radical, and radicals' legacies are never agreed on. But on this there can be no doubt: before she took office, Jews in British politics were a rare sight. After her, a Jewish politician is hardly worth commenting on.

The Labour Party is led by Ed Miliband, younger brother of David. If polling trends continue as they are — and given the poor state of the British economy, they just might — Labour will be the largest party after the next election. That means Ed Miliband may become Britain's next prime minister.

The Iron Lady would surely have seen the irony in the idea that her unprejudiced attitude to Jews led to a left-wing Jewish prime minister.